An Important research tool for Kytherians searching their genealogical roots in Australia. 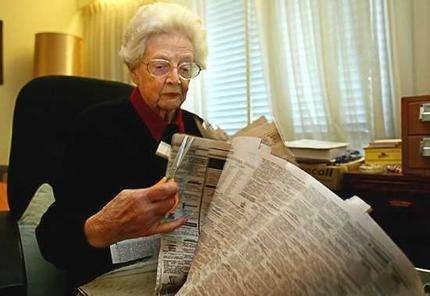 Hatched, matched and dispatched … Joyce Ryerson at work on the Ryerson Index, which is about to celebrate its millionth entry.
Photo: Edwina Pickles


At 88, Joyce Ryerson never expected to become an internet celebrity, the darling of "the genies". "It's got a bit silly," she says. People "come up to me and say, 'Are you the Ryerson of the Ryerson Index?"'
And when she confesses? "They treat me as if I am a God or something."
Few outside the gentle world of genealogy have ever heard of the Ryerson Index. But at next month's meeting of the "Dead Persons Society" (after the 1989 film, Dead Poets Society), they'll be cracking open the champagne. The Ryerson Index is celebrating its millionth entry.

For seven years, an army of 120 volunteers has spent countless hours combing through the birth, death and marriage columns of The Sydney Morning Herald.
With painstaking precision, the genies - as genealogists light-heartedly call themselves - have taken each fragment of information about a person and catalogued it on the web.

According to the index's organiser, John Graham, the project is the biggest of its type in the world.
It is an invaluable tool for any Australian trying to trace their family tree because privacy laws mean there is no public index of deaths in NSW after 1985, though many relatives of people who have died in NSW still place death notices in the Herald.

Yet the index owes its advancement to a human quirk. For 14 years, Joyce Ryerson took her Herald every morning, cut out the requisite columns, and then hoarded them in her laundry. She wasn't a genealogist then, merely helping to compile a register of former pupils of her old school, SCEGGS Darlinghurst.

But when she mentioned the contents of her laundry to fellow members of the Dead Persons Society, there was jubilation.
"It took me a few minutes to pick my jaw off the ground," Mr Graham said. "To a genealogist, it's a goldmine. I was in that laundry the next day. To the unrestrained joy of my wife, I arrived home with the boot of the car stuffed with death notices." His team set to work, converting the newspaper death notices into data that would prove invaluable to web-based family historians around the world for generations to come.