The following photos depict some of the Greek café paraphernalia held in the treasure chest of an avid collector of Lismore memorabilia, who wishes to remain anonymous.

All the crockery was manufactured at various times by the same English company, ‘Grindley Hotel Ware Co’, for the Sydney import firm of Gibson & Patterson Ltd, suggesting that the firm’s travelling salesman was a smooth talking operator who had the Lismore market, and possibly the whole North Coast of NSW, sewn up. The Feros plate came from a batch dated ’11-1923’ and was probably part of a bulk order placed by the extended Feros clan, who had branches at Byron Bay, Ballina and Lismore at this time (having sold out of Mullumbimby in 1921, but not extending their reach to Evans Head until 1936/37). Apart from Angelo Crethar, the Feros were the only restaurateurs in the region to use their own moniker as a café name, perhaps signalling grand visions of a franchise chain, or seeking to establish a high-recognition brand name like Comino and Peters. (Besides, it was an expensive business to change a café name – unless taking the Johnny Feros route of covering all bases with an assortment of crockery embossed with ‘Monterey’, ‘Marble Bar’, etc. Don’t ask.) 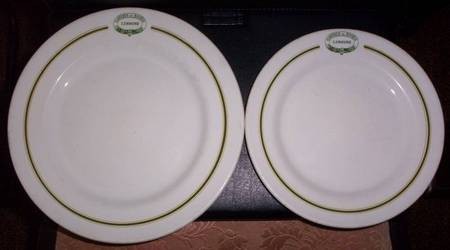 These plates are also from the batch dated ’11-1923’, suggesting that in one trip the gifted travelling salesman made a successful pitch to a number of Greek café proprietors.

Peter Nick Bavea, aka Peter Peters, arrived in town in about 1917 to acquire the café housing Lismore’s very first soda fountain, apparently installed in 1898. He had landed as a 16yr old in 1909 and spent time in Inverell and Narrabri prior to joining his brothers, Jack and Jim, at Barraba in early 1913. Together they ran the Crystal Refreshment Palace until mid to late 1916 when Peter took himself off to Manly, subsequently handing over to Jack to test the markets in Lismore. But he seems to have returned to Manly a year or so later, leaving the place in the hands of a manager, probably Harry Lakis for a period, until returning with his new bride, Mary Jones, in 1919/20. (He and Jack both married at Manly in 1919. Shortly after Peter returned to Lismore Jack and his Scottish bride, Matilda Craig, went off to Narrabri to go into partnership with Archie Gavrily.)

Upon return to Lismore there seems to have been some business machinations, with the place re-registered in Mary’s name and other odd goings on, but after a fire and a makeover in mid 1920 the place re-emerged as the Garden of Roses Café under the sole proprietorship of Peter, who also appears to be the first café proprietor in Lismore to start advertising as a Sundae Shop. He was an aggressive marketer and in early 1921 came up with the gimmick of opening a booth at the racecourse every Friday and Saturday, which laid the foundations for a general catering business. Around late 1921 he began calling himself the manager of the Garden of Roses rather than the Proprietor, likely implying that one of the other brothers, probably Jim, had arrived in town by then to take up partnership shares.

Around late 1923, shortly after the Great Barrow Wars, he passed the business to his brother Jack, although it’s understood he retained a share of the business as a silent partner. He moved to Brisbane for a while before acquiring the Royal Hotel at Mundubbera, near Maryborough, trading as Peters & Co, possibly with a partner. Sometime in the late 1920s he came back to Lismore for a year or so before disappearing to Melbourne following some more odd goings-on in the Garden. 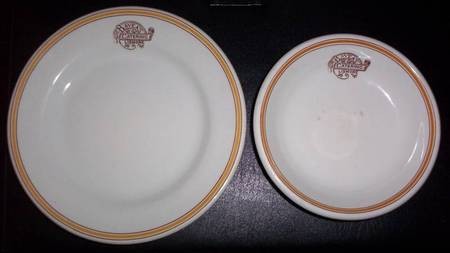 While Peter Bavea tried a career change as a publican his brothers, Jack and Jim, carried on in Lismore. It looks like Jim was the brother left to sell up at Barraba in 1919/20, probably coming to town shortly afterwards, but certainly ahead of Jack. He seems to have been the initiator of the catering business when ‘Bavea Bros’ acquired a 7 seat Studebaker in late 1922 to transport the wherewithal to the various picnics, banquets and general functions they contracted for. But outside this task the car seems to have been a white elephant and was continually advertised for hire, under Jim’s name, until sold in mid 1923 during the ‘barrow wars’ debacle. Thereafter the business reverted to a traditional café, offering three-course meals for 1/6d and homemade takeaway pies for 3d, but probably steering clear of fruit until again reorientated in the late 1920s. Jim’s circumstances thereafter are a mystery. He enlisted from Sydney for WW2 service and afterwards is believed to have joined Peter in Melbourne.

Jack remained the stayer. He appears to have sold out of his Narrabri partnership with Archie Gavrily around 1923, presumably coming to town almost immediately to buy into his brothers’ partnership. In the late 1920s, when Peter returned to Lismore, it seems something odd happened, probably the usual partnership blood letting. Bavea Bros was dissolved and both Peter and Jack began operating separately, at least for a year or so until Peter moved to Melbourne. In 1929 Jack and Matilda reoriented the business as a pure external catering concern and later that year passed the lease to the Feros Bros and moved across to North Lismore where they ran Bavea’s Catering Service for the next 25yrs. Jack grew apart from the Greek community and upon his death in 1973 was given a Presbyterian send off.

Archie Theo Gavrily followed his old partner to Lismore in about 1924, initially working at the Garden of Roses until subletting Theo Fardouly’s Olympia Café in 1925/26. Upon leaving Lismore he had various adventures around the Tablelands before settling at Barraba just before the war. 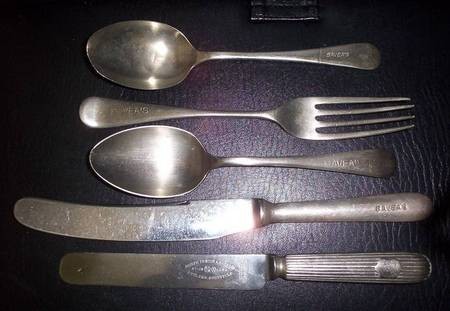 Some Bavea Catering cutlery. Over 25yrs Jack catered for weddings and functions at nearly every village hall in the Richmond region, often completing a circle in provisioning wedding feasts for the children of the parents he had earlier catered for. 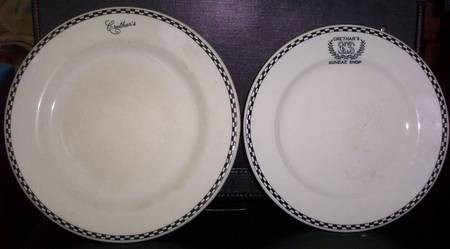 The batch number on the right hand plate is hard to read, but looks like 12-1935, while ‘Crethar’s’ on the left is 06-1939, coincidental with the date of Angelo Crethar’s makeover of his premier Sundae Shop into ‘Crethar’s Airconditioned Café.’

Angelo probably made a bulk order for crockery to supply his 4 Sundae Shops in town, opened progressively from 1923 after his arrival from Ballina. Around 1935 he consolidated in his main outlet in Molesworth Street. 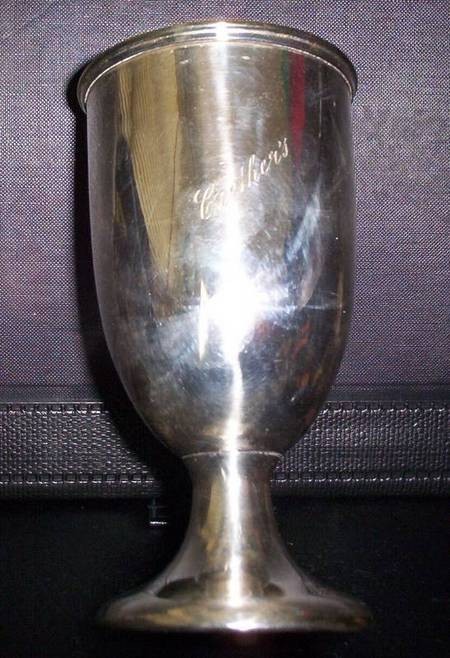 After the destruction of the 1945 flood Angelo Crethar’s restaurant was again renovated and made even more opulent, cementing his establishment as the favoured haunt of Lismore’s glitterati, particularly the after-theatre dress circle crowd. But fearing poaching by the ever-innovating Capitol, at one stage he introduced silver goblets for the serving of hot milkshakes during winter, quickly finding that the things were too hot to handle and generating much amusement amongst his compatriots (who subsequently offered Latte in glasses without handles.) The engraver’s spelling of ‘Crether’s’ was an omen. 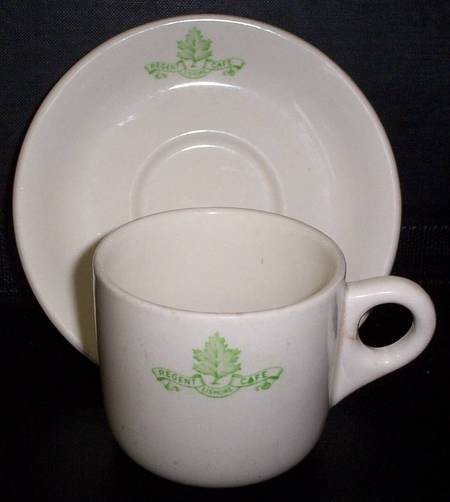 The cup carries the batch number 01-1947 and the saucer 10-1948. By this time the Regent was in the hands of Veniamin Gialouris of Mytilini. Presumably he decided to start with a clean slate upon acquiring the place from Harry and Nick Jim Crethar in ~1946. [Or perhaps there was nothing left to acquire, as the place had a clientele of barbarian kleptomaniacs at one stage. (Other stories indicate theft and destruction was a perennial problem for cafes everywhere. The conspiracy theorists reckon that smart travelling salesman was behind it.)] 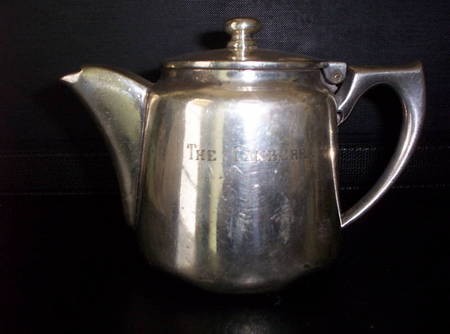 This tea pot probably came from Paul Coronakes’s Canberra Café, although the Canberra name disappeared from Lismore around 1925 and wasn’t resurrected until about 1935, (in a different location), when the Carkagis Bros acquired Peter Bavea’s original shop. 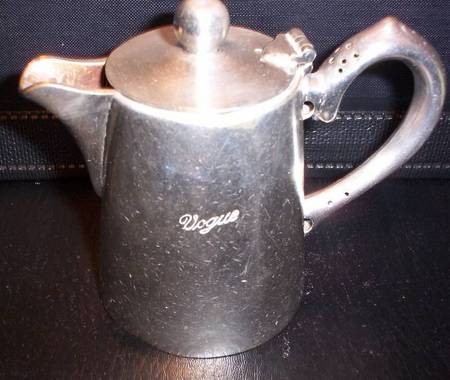 Angelo Crethar and Nick Crones established the Vogue Milk Bar next to the new theatre in 1936, the place remaining under this name until it closed in the 1960s. Presumably this tea/coffee pot, (or milk jug?), was part of the original outfitting purchase.

A bit of confusion arose in 1946 when two Greeks claimed to be ‘Jack Bavea, Caterer’ (just when the Lismoriotes had got used to the fact that almost everyone in Greece was named Harry Crethar). Jack Nick Bavea’s cousin, Jack Kyriacos Bavea, arrived from Tingha that year to buy into the Vogue, initially in partnership with Nick Crones until Nick opened the New City Milk Bar a year or so later.