The FIRST book published in Greek in Australia. 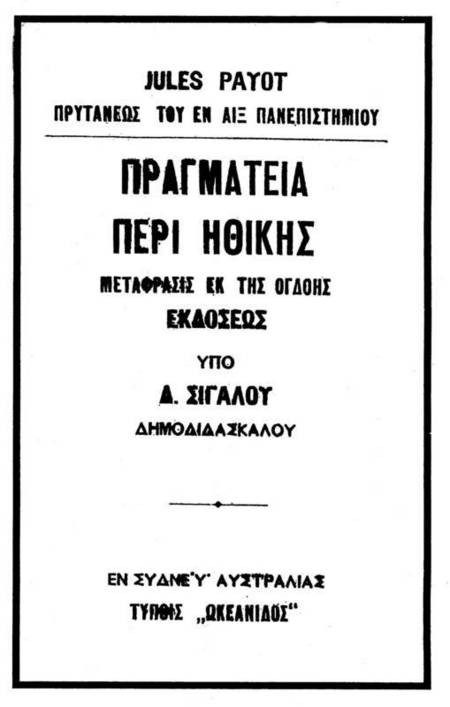 One of the important issues tabled at the three day conference was correcting a historical belief about the first book published in Australia in the Greek language.

The correction was made by Dr George Kanarakis from Charles Sturt University, who said the first book was one ti­tled Πραγματεία Περί Ηθικής ‘and not ‘Η Ζωή εν Aυσταλία’ (Life in Australia) as is widely believed.

In fact, the book was published between mid December of 1915 and the early months of 1916, by the later defunct Ωκεανίδα newspaper. A Greek translation, by a Dimitris Sigalos from an original French text written by Jules Payot, the book deals with questions of ethics.

The newspaper had informed its readers that the book was at the printing press on 3 December 1915. However, unable to ascertain more knowledge from the primary source, Dr Kanarakis turned to secondary sources, namely the biogra­phies contained in ‘Life in Australia,’ which was published in 1916.

The publishing production of ‘Life in Australia’ would have needed at least four to six months, which places its month of publication in the latter half of 1916. Logically, Dr Kanarakis said, This also places ‘Πραματεία Περί Ηθικής' between the month it was announced to be in its printing stages (Decem­ber 1915) and before the transcript of Mr Yiannikos’ auto­biography was submitted (first half of 1916).

The discovery proves that Greek Australian literature, al­though a relatively new literary genre, does presents itself with gaps in its history of book writing and book publish­ing. These kinds of philological problems, Dr Kanarakis said, are usually found in studies of long established gen­res and writings of antiquity. This discovery, he explains, also broadens the understanding and history of Greek Aus­tralian writings and readership.