History > General History > The only place 'xeni' could find work...

The only place 'xeni' could find work... 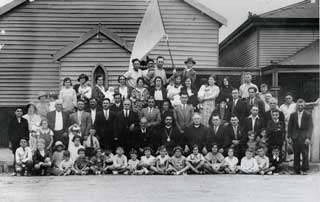 Effy Alexakis and Leonard Janiszewski, have traced the first hazy steps by some of Port Pirie's first Greek settlers. Their presence in this South Australian town emphasises that the Hellenic impact upon Australia is not simply limited to the post-World War II era, and further that the image of the Greek cafe proprietor cannot be accepted as a blanket characterisation of Greek work preferences in this country.

1430:Do you have a larger version of this photo so that we can see the people more clearly?