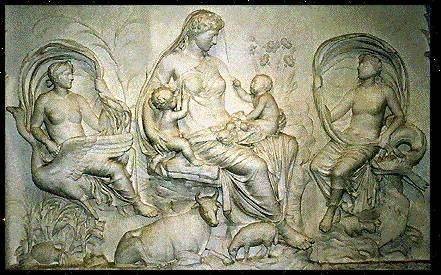 Gaia (Lat. terra: "The earth") was the first being, who appeared out of the chaos.

In the theory of Hesiod, Gaia was the first being, who appeared out of the chaos together with Tartaros (underworld), Nyx (night), Erebos (darkness) und Eros (ghost of love). Without the help of a man she created her sons Uranos (heaven) and Pontos (ocean).

She fused with her son Uranos, and bore the titans, Kronos Rhea, also Okeanos and Tethis, gods of the great stream, which winds around the earth.

Also the Kyklops, and the giants with a hundred arms.

But her man and son Uranos hated these creatures so much, that he pushed them back into the womb before they were born, which caused Gaia great harm.

Angry at her treatment by the tyrannical Uranos, Gaia furnished her son Kronos with a sickle made from firestone, and ordered him to castrate his father at the next opportunity which he was given.

Kronos did what his mother had told him, and threw the detached genitals into the sea. Out of the falling blood drops appeared the Erinnyias (furies), the giants, and also the Meliai (nymphs of the ashen).

The phallus floated on the sea and finally arrived at Paphos (Cypern) - or on the island Kythera/Lakonia. Out of the foam which was formed on the phallus the love-goddess Aphrodite came to being.