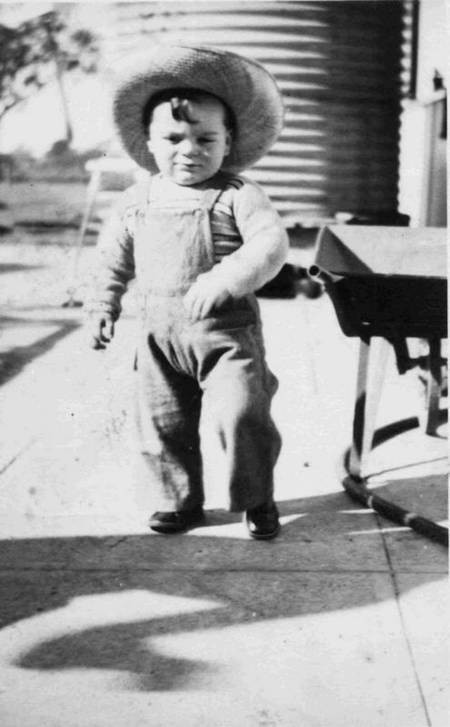 My father's brother Panayoti (Peter) had been living in Australia from 1928. He was 12 years of age when he arrived in Australia. Eventually he settled in the far western New South Wales town of Warren, and married Aryiro (Sylvia) Aloizios.

When my father migrated to Australia in 1949, he was relatively old (33 years of age). He eventually chose to establish himself in Gilgandra, NSW, a town about 60 miles away from Warren in NSW. He married Evangalia (Angie) [K]Coroneos Belos, Karavas.

My mother was destined to have 5 children. I was the eldest. The second eldest child, Olympia, would die tragically from a respitatory illness, never properly diagnosed, as an infant. There followed on a regular basis, in birth order, Peter (Panayoti), Phillip (Triunduphilos), and Eric(Theothoros, or Theothericos).

In the period leading up to each birth, and for a time thereafter, my parents would deposit me with Uncle Peter, and Thea Aryiro in Warren. This photograph was taken on 1st September, 1953, probably sometime after the birth of my younger sister. It is taken in Warren.

My mother used to leave my hair long. It was a mass of "boukles" - curls. My Uncle Peter wasn't fond of long hair, and would get my aunty to cut it short - the "Karavas" cut. Over a few weeks I would bond deeply with my Aunty, and came to see her as my mother. By the time it was time for me to return to Gilgandra, I did not recognise that other woman as my mother - and wanted to stay in Warren with my real mother. It took quite a bit of adjustment, each time, to realise that the lady that lived in Gilgandra was my real mother.

The Kytherian Society of California (KSOCA) Is pleased to invite you to attend our Global Kytherian "ZOOM" III on March 20/21, 2021...

Interviewed by Joshua Kepreotis   After being fed spanakopita and tiropitakia, dipping Karavas’ famous paximathia into Greek coffee and then...

Hi fellow Kytherians, I am a Kytherian (1/2 Dutch) who has never been to Greece but strongly feels the pull...

Thank you to the Kytherian community for supplying me with the name of the father of my...

The Kytherian Society of California is pleased to invite you to participate in our 2nd GLOBAL ZOOM! We are delighted...

Thank you for your reply and details. Appreciate you taking the time to supply this information. Thank...