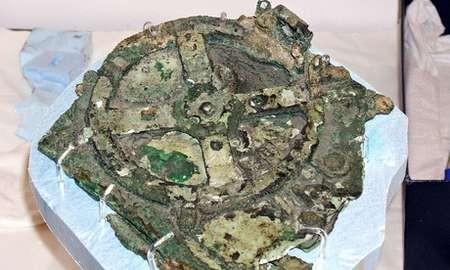 Photograph:
The remains the Antikythera mechanism, a device of up to 40 cogs and gears that the ancient Greeks used to track the cycles of the solar system. Photograph: X-Tek Group/AFP

Over 2000 years ago, a Roman vessel ladened with stolen Greek treasure sank near the Greek island of Antikythera. Many years later, in 1900, sponge divers hauled up a piece of the cargo now known as the Antikythera mechanism, the oldest known computer in the world.

At first scientists discarded the find as a sea clogged lump. However, when the device was eventually cracked open, what they found were cog wheels, dials and inscriptions.

Scientists took over 100 years and needed X-rays and CT scans to work out it was used to calculate the heavens. It contains pointers to position the planets, a star calendar, eclipse prediction dial and a timetable of athletic events.

Nothing close to the complexity of the Antikythera mechanism is known to have been created until well over a thousand years later. The next comparable device is the mechanical clock in medieval Europe.

The wreck sits 60 metres below the surface of rough seas, a dangerous dive even by today’s standards. Two of the Greek sponge divers in 1900 resurfaced paralysed by the bends, while a third one died.

Marine explorer Jacques Cousteau spent several days at the site in 1978, and hauled up a few trinkets which appear to date the vessel, although divers could only stay at the site for minutes at a time. No one has since returned.

Now, however, marine archaeologist Brendan Foley, from the Woods Hole Oceanographic Institution in Massachusetts, has been granted permission to investigate the site further.

Accompanied by Greek archaeologists, Woods will use rebreather technology, which recycles unused oxygen from each breath, allowing one to stay down longer. This will enable the team to survey the site extensively in a world first.

The team will also use “James Bond style propellers” to survey the entire seafloor of the 17 nautical mile island for the first time.

Questions waiting to be answered are – what else is down there? Missing pieces of the Antikythera mechanism? Is there another one to be found?

It’s believed dozens of unknown wrecks, ladened with treasures including lost technology, lie at the bottom of this treacherous and popular trade route of ancient times.