People > Life Stories > A journey inside the mind of Lafcadio Hearn

submitted by Kytherian Cultural Exchange on 10.09.2011

A journey inside the mind of Lafcadio Hearn

By LISA GAY and FINTAN MONAGHAN

One hundred and twenty years ago, Greek-Irish writer Lafcadio Hearn first arrived in Japan; in Matsue, a provincial backwater in Shimane Prefecture, he became Koizumi Yakumo — his adopted Japanese name. Enamored with the city's ancient and enduring culture, he married into a local samurai family: No wonder, then, that it was in Matsue that Hearn wrote his famous "Glimpses of Unfamiliar Japan." This month, the city is celebrating its most famous (adopted) son with an art exhibition. 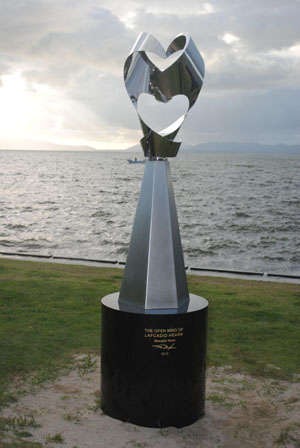 Entitled "The Open Mind of Lafcadio Hearn," the show is Matsue's version of a 2009 exhibition at the American College of Greece, which was nearly 15 years in the making. The idea first came to Greek art dealer Takis Efstathiou and Japanese artist Masaaki Noda back in 1996 when the pair traveled from Paris to the small Greek island of Lefkada (Hearn's birthplace and namesake). After visiting Hearn's childhood home and talking with locals who remembered old stories about his family, they decided to ask the college to sponsor a statue to commemorate Hearn.

"At the time, there was no door for foreign artists to get into Greece," recalls Noda.

Years later, as Noda's profile in the art world strengthened, he finally got the greenlight to create the sculpture "Open Mind of Lafcadio Hearn." The finished piece is a tangle of metallic wings twisting toward the sky: One points Westward, the other East. In the middle is empty space — but viewed from the right angle, it forms a heart. "I came up with the name," jokes Efstathiou, "but Noda brought the heart."

While the original idea was a single sculpture, it blossomed into an entire exhibition of works celebrating Lafcadio Hearn's multicultural mindset. It was the success of the Greek show that laid the groundwork for the current exhibition in Matsue, complete with a sister statue, also by Noda, standing on the shores of Lake Shinji. 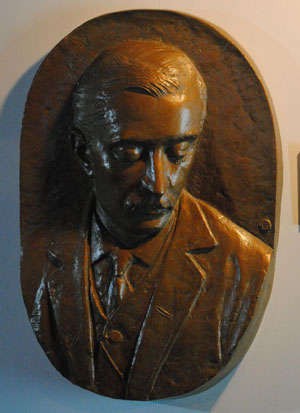 The main venue for the exhibition was, until Nov. 3, the striking Matsue Castle (from tomorrow until Nov. 14 the show will move to Karakoro Art Studio and the Lafcadio Hearn Memorial Museum). Looming over Lake Shinji from its hilltop perch, the castle was evocatively described by Hearn as a "vast, iron-grey dragon." But trying to book the ancient keep for the show wasn't easy.

"Everyone was against it at the start," recalls Shoko Koizumi, head of the Koizumi Yakumo Society. "But eventually, with persistence and the right contacts, we were able to get permission."

A diversity of themes were at play among the thick, wooden beams of the castle: Hearn as man, traveller, storyteller, symbol of multiculturalism, and even figure of myth and legend. Masatoshi Izumi's abstract "Kokoro," for example, is a smooth, gently curving stonework that seemingly represents the source of all living things.

Others take a more direct approach: Debra Bowden and Christos P. Garoufalis base their portraits on famous images of Hearn, while Seiho Wada depicts Jozan Inari shrine, one of Hearn's favorite places. Ynez Johnston paints a delightful picture of Hearn the exotic traveler, while Zoe Savina draws inspiration from Greek myth. Her poem, "To the Plum Trees — The Other Odysseus Dedicated to Lafcadio Hearn," is written in Hearn's three tongues, Japanese, English and Greek, and displayed on a striking azure wall-hanging of clouds and butterflies.

Other artists look to Hearn's stories. "I read 'Kwaidan,' which I couldn't put down," reveals Irish artist Stacia Blake, "and I especially loved 'The Dead Secret.' " The story concludes with a monk discovering a letter containing "O-Sono's secret," a mystery not revealed to the reader. Blake's abstract piece depicts what she imagines the secret to be.

Another engaging work is Aris Stoidis' "Death Giving Life, Rebirth." Taking a cue from "The Story of Kogi the Priest," Stoidis presents a giant, transparent paper fish. When illuminated, an outline of a human skeleton becomes visible, representing Hearn's rebirth in Japan.

But the most stirring works explore Hearn the orphan looking for a home. From Mitsumasa Anno, we have a portrait of Hearn's mother, based on recollections by Lefkada residents. This is particularly poignant as Hearn is said to have wanted a portrait of his mother so badly that he'd have given a fortune to have it. Along similar lines is a work by Vassiliki Koskiniotou suggestive of Hearn's search for a mother-figure and ultimately finding it in his wife Setsu.

A number of contributors to the original Greek show have returned for the Matsue exhibition, including Alexandros Maganiotis. "It's a digital collage," Maganiotis said of his piece. "Even though it's new in technique, it's old in the way it looks." Resembling a yellowing parchment, the piece depicts a double image of Hearn. One is dressed in western garb, its mirror image in kimono. "I think he was looking for a place that felt like home because he was dislocated to start with. . . . I think he found a home in Japan."

The end of Hearn's romance with Japan is a well-kept secret only obliquely referred to in this show. Hearn arrived in a time of great turmoil. Japan had just won the Sino-Japanese war and was rapidly Westernizing. Old traditions were under threat. Writing to his friend Basil Chamberlain in 1893, Hearn lamented that the "the world of electricity, steam, mathematics, is blank and cold and void." The exhibition chooses to touch on the diversity and contradiction within Hearn's thoughts with this quote: "To the child, the world is blue and green; to the old man, grey — both are right."