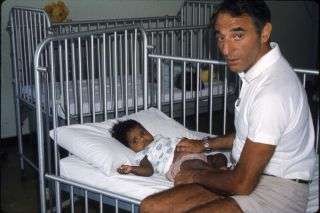 Neos Kosmos pays tribute to the life and work of Dr Archie Kalokerinos, medical pioneer of the 20th century

"He was an incredibly compassionate man, very ethical, honest - to the point of being a bit tactless, confrontational sometimes ... he didn't suffer fools gladly. His patients were of his ultimate importance," explains Dr Archie's wife Catherine.

To those who didn't know Dr Archie, his life's work is an extraordinary tale. It was one fraught with frustration at times, coming against opposition in the medical world, but one that through his strength and care for patients, would see him save many lives.

Archie Kalokerinos was born in the NSW town of Glenn Innes on 28 September 1927. The son of Nicholas and Mary Kalokerinos, migrants from the Greek island of Kythera, Archie was one of five children. His parents ran a cafe in the country town and Archie grew up in the small apartment above the shop.
There will be times in Archie's story where you may wonder was this man was put on the earth for a reason? Fate plays a hand on many occasions in his life.

His education was one such instance. His was a time when the war was ending and Australia was in desperate need for doctors, and even though his educational background left little to be desired, Archie was accepted into medical school at Sydney University.

Archie interned at Lismore Base Hospital, then went to England to further his training as a surgeon - in England he met his first wife and had a daughter Ann.
In 1957, fate would play another hand in his life. Archie took a role for three weeks as the locum in the isolated town of Collarenebri.

His time in Collarenebri would change his life forever. It would be where he would meet his wife Catherine, it was where he would develop a life-long friendship with Emanuel Petrohelos, and his son Bill - who happened to be his father's next-door neighbours in Greece, and it would be where his medical pioneering spirit would really take off.
In his biography, Archie says that before he left Sydney to work in Collarenebri, a nurse told him that he would lose a lot of babies.

"I thought that this could not be so because I knew 'everything' that needed to be known," he said, "I could handle 'anything'".

What he wasn't expecting was the sheer volume of infant deaths that he was seeing - unexplained deaths mainly from the Aboriginal children of the reserve situated on the edge of the town. His concern for his patients saw him contact experts. He said he was "openly shunned by doctors". He was told this didn't occur anywhere else in Australia and that the problem was due to something he was doing. He knew this wasn't right.

He soon discovered a similar problem existed in many areas of indigenous communities all over Australia, to the point he authored a book called Every Second Child about the infant death epidemic he was witnessing. He conducted autopsies on the infants to try to find out what was going on but his attempts were thwarted by authorities.

Frustrated with what he was seeing - and hearing about Bill's success as an opal miner in Coober Pedy - Archie hung up his stethoscope and tried his hand at opal mining in 1965, with the intention of never returning to medicine.

A chance meeting with a group of semi-tribal Aborigines discussing infant deaths in their community would force Archie to revisit the medical world. He said he met a woman from the tribe who said to him: "we do not know why our children get sick and die. Before white men came this did not happen".

That night, Archie slept under the stars and thought. His thoughts turned to Vitamin C; maybe, he considered, if children get sick they can't absorb Vitamin C and maybe the answer is to administer them with Vitamin C by injection. Obsessed with this theory, Archie knew what he had to do: he had to get back to medicine in order to demonstrate whether it was true.
In Sydney, Archie received a phone call that would change everything. Tom Clark, from the Collarenebri District Hospital told him of a doctor's position that had become available and asked if he'd like to return?

"It was like asking me to accept a million dollars," recounts Archie in his biography. The next problem he faced was finding somewhere he could practice his hypothesis - then he was faced with Mary, a sick Aboriginal girl, with what presented as meningitis. Mary was seriously ill and Archie knew he had to administer Vitamin C. But the matron at the time - a formidable force - would not allow him to do this. He remembers it as a tug of war, which Archie ultimately won. He immediately administered the Vitamin C.
"Twenty minutes later Mary was normal," he said. "I had performed a miracle."

As the doctor at the time, the infant mortality rate went from the highest in the world, to the lowest overnight. This discovery would see Archie's work take on a completely different path than that of a country-town doctor. He would continue on working with cases relating to sudden infant death syndrome, shaken baby syndrome, go on to meet some of the world's finest medical and scientific minds including: Glenn Detman, Fred Hollows, Fred Klenner, Irwin Stone and dual Nobel laurete Liuns Pauling. His work with Vitamin C would take him to far corners of the world such as the US, Mexico, Italy, Asia and Alaska.

But his time in Collarenebri saw his life take another turn, on the path of love.

Whilst working, he met a young English nurse, Catherine Hunter. A strong woman in her own right, their's was a supportive and loving marriage that at first may not have happened.

"Archie was very marriage shy," explains Catherine. "He said to me 'this isn't a proposal, do you think you could marry me?' I remember thinking that's one of the weirdest things I had ever heard. I think I said something like 'I really don't know, I'd have to get to know you a lot better', and that must have satisfied him."

They were married on 17 December 1977.
Together they had two children, Helen and Peter, who remember a dad who was not only committed to his life's work, but a father who was always there.
In her eulogy, Helen remembers "a playful dad... down on all fours, chasing us and playing monsters in the hallway in Bingara."

Archie raised his family in the country town of Bingara, in NSW where he worked as the local doctor. Peter remembers the time.

"Dad would go to work early to do hospital rounds, but was home around 4:00 pm in the afternoon when he would spend time with us tending to his prized lawn or building furniture in his workshop."

During this time, his work was recognised by the television show This is Your Life, but, not without controversy as the AMA tried to ban the broadcast.

"You could describe him as a passionate Greek - very full on," says Catherine. It was at the opening of the Kytheraismos Conference II in Canberra in 2006, that then Prime Minister John Howard acknowledged his achievements and said: "through his consistent and selfless efforts saved the lives of many young indigenous Australians". In 2000, he was named Greek Australian of the Century by Neos Kosmos.

Archie peacefully passed away on 1 March 2012. He suffered from dementia and at the end of his life was in a home. It was a hard time for family and friends and Peter describes it as a "heart wrenching time".

A brave humanitarian who knew no bounds when it came to saving the life of a patient, Archie will always be remembered for his determined work, for being a proud Greek Australian, and for being a loving husband, father, friend and caring doctor.

"Because of you, thousands of babies were born and thousands more lived to tell their tale," Helen said in closing to her eulogy.

"You have to wonder about fate, the divine plan of whatever you want to call it," ponders Catherine of her life with a man who truly was a pioneer of medicine.