Calling Australia home was a lucky move for Greek son 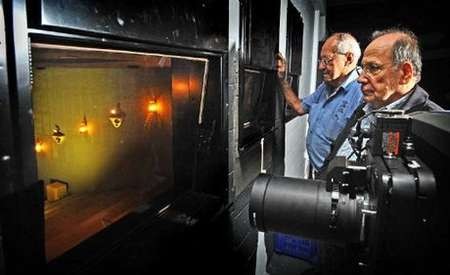 MOVERS AND SHAKERS: Spiro and Angelo Notaras look out into one of the newly built smaller cinemas - at the Saraton Theatre. PHOTO: ADAM HOURIGAN

His lifetime of achievement has been recognised with the Medal of the Order of Australia (OAM), with the notation emphasising his "service to the Greek community, particularly through the Greek Orthodox Archdiocese of Australia".

"It's a great honour," Mr Notaras said, adding he had no trouble keeping the award a secret until its official announcement yesterday.

"And being the son of a recent immigrant to Australia in the last 100 or so years it's a double honour."

Born into what is now one of Grafton's most notable families in 1933, Mr Notaras first ran a small cinema in Woolgoolga, then entered the banana industry.

That led him and his younger brother John into the import and manufacture of machinery, including two highly successful products - a minuscule computer ignition for small engines that was named New Invention of the Year on ABC-TV's The Inventors program in 1975, and the top-selling Atom Lawn Edger.

Their business success enabled them to become generous fundraisers and benefactors of many causes.

Grafton has seen the benefit of Mr Notaras's work in the painstaking restoration of the Saraton Theatre, that had been built by his father Tony and uncle Jack in the 1920s, and which he bought with his brothers and his cousin, Spiro.

He described the project as "an extraordinary challenge that I believe has given Grafton something to be really proud of".

"I was up there at Christmas time and was very pleased with how good it looks, and how clean and tidy it was," he said.

The Notaras family originated on the Greek island of Kythera, where many of the population decided to migrate to Australia.

The island's population is just 3000 but in Australia there are more than 60,000 Kytherians and their descendants.

Mr Notaras has worked and contributed funds to establish a comprehensive website, kythera-family.net, and the publication of 13 books about the history of the islanders and the wider Greek population in Australia.

His contributions to the Greek Orthodox Church have included helping to run a fundraising campaign that collected $700,000 to help an alcohol and drug rehabilitation program.

He was awarded the Cross of St Andrew, the Greek Orthodox Church's highest award, in 2003.

Mr Notaras said he was a proud Grafton product, adding there were many outstanding people who had come form the city, including his twin brother Mitchell, an eminent surgeon, who died in 2011.

"I'm very proud that our family name is up there with everyone else in Grafton," he said.

View / download a .pdf version of a longer article from the Kytherian Association of Australia, Newsletter, here: