Reprinted by permission, from the Desert Dispatch, Barstow, California 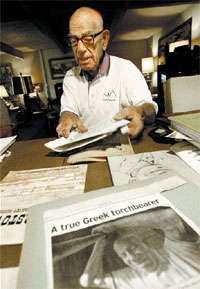 Editor's note: This is the first of two parts.

Recently I was watching the Olympic torch relay on TV when the torch was passed to Pete Clentzos. They briefly ran down his biography, mainly emphasizing that he, having just turned 95, is the oldest USC Olympian, oldest Greek Olympian and possibly the oldest Olympian in the world.

I also saw an interview with him later and both times they did not mention the most important piece of his biography, at least to my fair and balanced mind. He was Barstow Union High School's athletic coach from 1936 to 1941.

Pete Clentzos was born June, 1909, to Greek parents in Oakland. He went to college at the University of Southern California. At USC he was a member of the football team, varsity track and letterman for three years in pole vault.

"I felt great that day, but I have no excuses," Clentzos said, "It was just one of those days."

Luckily his dual Greek/American citizenship paid off. He tried out for the Greek team and made it. He finished seventh in the pole vault event at the Olympics

Pete has many fond memories of the 1932 Olympics. One of the things that he remembers that was vastly different about his games compared to today is security. The Olympic village in 1932 was open to spectators and the athletes shared a lot of time together. He remembers that most nights they would gather to watch movies in an amphitheater.

Pete has many mementos from the 1932 games including the bamboo pole that he used in the competition.

After the 1932 Olympics he traveled around and competed in many different competitions. In 1935 he set the Greek National pole vault record of 13' 5". This record stood from 1935-1950.

In 1936 he consulted in the 1936 Olympics that were held in Berlin. He wanted to go but it was the depression so he had to get a job. He was one of thirteen teachers that applied for a job at Barstow Union High School.

Pete was hired to teach history and physical education. An additional class he taught was a new program at the school, woodshop. Pete's father was a carpenter, so he learned the trade from him. He also coached football, basketball, baseball, wrestling, and of course, track.

One program he started that our high school still excels at was the first cross country team in Barstow. He remembers that they used to close down Main Street and race down the road with many locals cheering them on.

His coaching experience was a great success. He took two football teams to the CIF finals with his 1940 team being one of the best. They won seven games, lost one, and tied another. For the season the Riffians outscored their opponents 213 to 47. They beat Victorville that year 32-0.

One of the difficulties he had coaching in our area was that a number of his players were from outlying communities like Ludlow. Due to bus schedules, these students only had about 40 minutes at a time to practice.

He would hurry them along by yelling out his trademark phrase "Hubba Hubba!" This phrase would give him national recognition in another chapter of his story.

Pete wasn't just about sports in our area. He had fun other ways too. He was a participant in our early Calico Days.

Calico Days at the time was held in Barstow near where U-Haul is today. Pete remembers that they also went to Calico for some of the activities.

One of the big competitions at the time was the Whiskerino. All the local men would grow out their beards. Those who didn't were good naturedly thrown in jail. To view the jail that housed these miscreants and was used in many other fun events, come to the Mojave River Valley Museum, 270 E. Virginia Way.

On the day of the competition, the men's beards were judged to see whose was best. Pete, with his Greek heritage, seemed to be a ringer for this competition.

One story that Pete told me about Calico Days was of the time that a number of his friends got dressed in their Western gear and rode to the Harvey House.

A passenger train would pull in and the posse greeted them with many whoops, hollers and shots in the air from their guns. Most of the passengers ran back into the trains in fright, getting their fill of the real Wild West.

Editor's note: This is the second of two parts about Pete Clentzos, an Olympian who lived in Barstow.

Pete Clentzos's time in Barstow changed him in several ways.

He met his wife, Helen, in Barstow. Helen was a grade-school teacher in town.

In a Greek coincidence, Helen was originally from Troy, N.Y., so the Greek boy, Pete, achieved the thousand of years old dream of marrying "Helen of Troy," and it didn't even take a war. Helen passed away in 1985.

As it did for everyone at that time, Pearl Harbor Day, December 7, 1941 affected the Clentzos' life. Pete realized he would be drafted, so he joined instead and left Barstow. He was stationed at Santa Ana Air Base. He later enrolled in officer training.

The Army was wise in Pete's case and let him do what he did best, teach physical education. While he was teaching troops he used to hurry them up with his trademark cry of "Hubba, Hubba." Soldiers picked it up and took the phrase all over the world. To this day, Pete proudly claims that he invented "Hubba Hubba."

He was in the military for four years, 1942-1946, and afterward he moved to Pasadena. He and his brother-in-law built two houses to live in on the same lot and Pete still lives in his Japanese influenced house. Even though the decor of the house is mainly Japanese-inspired there is still a lot Greek decor on the walls.

Of course, after he retired in 1974 he did not take this as a sign to slow down. He participated in or contributed to many local sports and service organizations.

One of the more interesting projects he worked on was one for the State Department. In 1979 he organized a 15-man team of coaches to give workshops to athletes in China. One of the venues they worked in will be used in the 2008 Olympics.

When the Olympics came back to Los Angeles in 1984, he had to be a part of it. He was assigned the job of deputy manager of track and field officials.

He has had his hand in many aspects of the 2004 games. He was a member of the committee that attempted to get the games to Greece in 1996 that Atlanta won.

This year he carried the torch for 400 yards and handed it off in front of his beloved Memorial Coliseum. He had the choice to carry it into Dodgers Stadium but he chose his route because it was in the area he taught at Roosevelt High School. A number of his students showed up and cheered him on with cries of "Hubba Hubba." When we visited with Pete he gave us a rare treat to actually hold the torch he carried.

We visited with Pete on Aug. 5. He was getting ready to go to the Athens games on that Friday with his son, Pete Jr. He isn't just going to see the games. he is an honored guest.

On the Saturday after he arrived he was honored by a reception thrown by the American ambassador to Greece. He also received the key to Athens from the mayor.

When I asked him about the secret to his long life he said, "Exercise. Life is meant to be active. It's work, but it's worth it." He still runs a half mile almost every day. He has a weekly exercise schedule at a local gym. After we visited him he was going for a swim. He is also an avid golfer and runs the golf competition for a the Pasadena Senior Olympics.

He also keeps a strict diet that predominantly consists of fruits and vegetables with some chicken and fish and very little red meat.

Pete Clentzos still has fond memories and ties to our area. A number of his students and players, like Lowell Larson, are still in contact with him and he writes to them and sends cards regularly.

Is vice president of the Mojave River Valley Museum