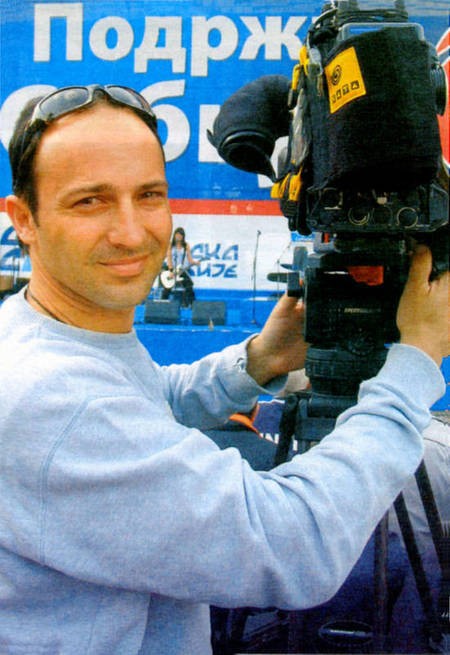 The point of focus is to shoot and run

Immanuel Panaretos is not pleased. He’s Just flown in from a shoot in Holland and the airline mislaid his case of video lights again. But Manny is a good-natured, philosophical kind of guy, and after a call from the airports he’s been re-united with some of the vital tools of his trade. The Al Jazeera team are a friendly bunch, their most visible member being correspondent Barnaby Phillips. But behind Phillips is a small highly effective production team comprising of Manny, producer Juan Carlos Van Meek and office manager Alexandra Stergiopoulou. As Manny and I talked in the “AJ” office off Panepestimiou, I was amazed to hear the size of their patch.

“We’re here as a hub to access other countries,” Manny explains, in his soft unmistakable Australian twang. Scribbled locations on the office whiteboard testify to the vast geographical area the team covers: Belgrade, Pristina, Rome, Skopje, Cyprus, Turkey, Lebanon, Israel. And they are often led further a field, reflecting Al Jazeera’s elaborate global news-gathering logistics. August 2008 saw the team in the United States undertaking a three-week assignment on the race for the White House.

Panaretos was born in 1972 in Dubbo, a small country town in New South Wales, Australia. The youngest of three children, his father emigrated to Australia from Kythera in the 1950s. His mum, who was born in Australia, is the daughter of Kytherian parents. Manny’s roots are clearly a source of great pride. “I grew up in a traditional Greek fast food shop. My dad still makes hamburgers and milkshakes today,” he tells me, and confides that, despite travelling the world, and his love of Kythera, his heart will always be in Dubbo.

A graduate of the University of Canberra, where he studied economics, Manny admits to “hating every minute of it”. While still a student, he grabbed his first chance to work in television. I was fortunate to get a part-time job at Parliament House in Canberra as a sound recordist for Australia’s Channel 7.” After graduation, Manny was offered the job full time and over the next two years moved from sound to the camera, and from Channel 7 along the corridor to Channel 9. Still covering political news stories in Canberra, by 1999 Manny had itchy feet. “It was time to break free and explore the world. I knew I could get freelance work in London, so off I went.” In March 1999, the Kosovo war and the NATO intervention brought the media flooding into Kosovo. Freelancers were in high demand. “There weren’t enough cameramen available to cover the story,” Manny remembers, “I got work immediately.”

Manny’s freelance work eventually led him to the BBC, and he soon turned regular freelancing into a staff position in Manchester. For the next five years he travelled widely, shooting in locations from Thailand, when the Tsunami struck, to the US presidential elections, to the Athens Olympics in 2004. He married his Kytherian-born wife Stamatina in Kythera the same year. Living in the UK, they were able to holiday to the ancestral home often, but after five years in Britain, Manny wanted to move on once more. The constellations aligned, and the offer of a job with Al Jazeera brought Manny to Greece.

Since its launch, Doha based Al Jazeera has broken the mould of satellite television news. What’s it like to represent this unique network at the sharp end? “One thing is for certain, Al Jazeera always gets a reaction,” says Manny with a smile. “Sometimes it’s a very positive one.” People will say, “We know who you are - we like the way you tell stories differently.” Most Middle Eastern countries obviously have a liking for AJ. It’s not quite so welcomed in America, where it is not so well-known or appreciated. Manny’s work has often taken him to the most infamous conflicts of recent times like Iraq and the former Yugoslavia. So how does he react to working in such intense and dangerous situations? “Strangely enough, I’ve never feared for my own safety in a war zone. Large crowds with alcohol are for me the place where you need to watch your back. I was really scared in Belgrade this year when the US embassy was set on fire, after the Kosovo declaration of independence. It was a very hostile situation. I stole a few quick shots, the American flag burning, people throwing rocks. Then you get away as quickly as possible once you think you’ve filmed enough.”

And what of the future for Manny Panaretos? “I’ve been working for Al Jazeera for two years now. I do a job I love and I’ve come to a point where I know what I’m doing. I’m very lucky,” Manny declares, “but I promised my dad I’d be away for two years and that was back in 1999! I miss my family and the culture.” For Manny, two or three years more in Europe will be enough; “Australia will always be the light at the end of the tunnel, the point of focus.”

The (Tzortzo)Poulos and Panaretos families. The Many Links. Manny Panaretos's grandfather Dimitri, was one of the early Kytherian immigrants to Australia. He married Maria, and settled in Dubbo, NSW, eventually establishing a very successful Fish Shop there. Dimitri and Maria had three children, Poppy, Tony and Arthur. Poppy married my second cousin Peter George(opoulos), Tony married Helen Petrochilos, and Arthur, married my first cousin, (Ou)rania Poulos from Goulburn. Dimitri and Maria, Manny's grandparents, christened my youngest brother, Eric, making the two families sympetheri a third time over. Helen Petrochilos's father's name was Manuel, and hence Manny, the subject of the story above, was the name of the second son of Tony and Helen. Con Poulos established a Fruit Shop in Gilgandra, 40 miles (64 kilometres) north of Dubbo. Every Wednesday he would drive a large truck to Dubbo to do the weekly stock buying for the shop. Every Wednesday, he would stop into his Sympethero's shop and buy a large quantity of fresh fish for the family. Every Wednesday the Poulos's had fish for tea in Gilgandra. Tony went on to establish a very successful fast food business, which in his late sixties, he still operates with great enthusiasm. Tony Panaretos's shop - The Centre Spot, Dubbo Tony Panaretos in his shop with assistant I left Gilgandra for uni in 1969, and Manny was born a few years later. Obviously the families maintained contacts in the ensuing years, and I watched the boys grow up. Later Manny got married in the Monastery of Myrtithyotissa, Kythera, and settled in Greece. Manny's father, Tony, is the most likeable of men. His mother Helen is delightful. Tony is as "straight as a gun barrel". A true centre of the road man. How such a conservative family raised a boy to enter into a profession that has to be described as "quite radical", is one of lifes' little mysteries. What Manny's story does show is the multifarious work, and activities, that 2nd and third generation Kytherians engage in, and excel at. More power to them all!