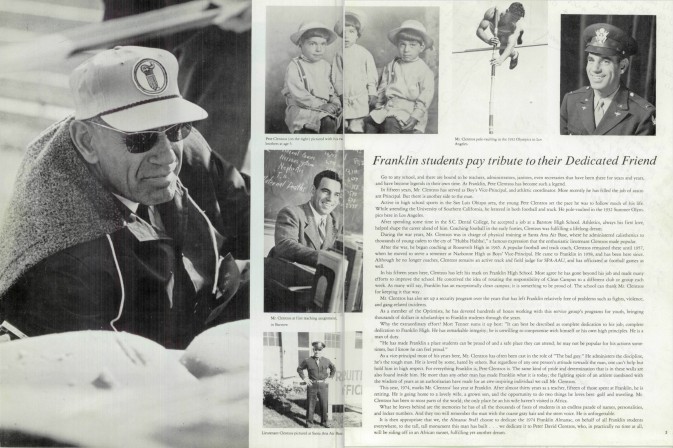 Go to any school, and there are bound to be teachers, administrators, janitors, even secretaries that have been there for years and years and have become legends in their own time. At Franklin, Pete Clentzos has become such a legend.

In fif years, Mr. Clentzos has served as Boy’s Vice-Principal, and athletic coordinator. More recently he has filled the job of assistant Principal. But there is another side to the man.

Active in high school sports in the San Luis Obispo area, the young Pete Clentzos set the pace he was to follow much of his life. While attending the University of Southern California, he lettered in both football and track. He pole-vaulted in the 1932 Summer Olympics here in Los Angeles.

After spending some time in the S.C. Dental College, he accepted a job at a Barstow High School Athletics, always his first love, helping shape the career ahead of him. Coaching football in the early forties, Clentzos was fulfilling a lifelong dream.

During the war years, Mr. Clentzos was an charge of physical training at Santa Ana Air Base, where he administered calisthenics to thousands of young cadets to the cry of “Hubba Hubba!,” a famous expression that the enthusiastic lieutenant Clentzos made popular.

After the war, he began coaching at Roosevelt High in 1945. A popular foot all and track coach, Clentzos remained there until 1957, when he moved to serve a semester in Narbonne High as Boys’ Vice-Principal. He came to Franklin in 1958, and has been here since.

Although he no longer coaches, Clentzos remains an active track and field judge for SPA-AUU, and has officiated at football games as well.

In his 15 years here, Clentzos has his left his mark on Franklin High School. Most agree he has gone beyond his job and has made many efforts to improve the school. He conceived the idea of rotating the responsibility of Clean Campus to a different club or group each week. As many will say, Franklin has an exceptionally clean campus; it is something to be proud of. The school can thank Mr. Clentzos for keeping it that way.

Mr. Clentzos has also set up a security program over the years that has left Franklin relatively free of problems such as fights, violence, and gang-related incidents.

As a member of the Optimists, he has devoted hundreds of hours working with this service group’s programs for youth, bringing thousands of dollars in scholarships to Franklin students through the years.

“He has made Franklin a place students can be proud of any safe place they can attend; he may not be popular for his actions sometimes, but I know he can feel proud.”

As vice-principal, most of his years here, Mr. Clentzos has often been cast in the role of “The bad guy.” He administers the discipline, he’s the tough man. He’s a loved by some, hated by others. But regardless of any one person’s attitude towards the man, one can’t help but hold him in high respect. For everything Franklin is, Pete Clentzos is. The same kind of pride and determination that is in these walls are also found inside him. He more than any other man has made Franklin what it is today; the fighting spirit of an athlete combined with the wisdom of years as an authoritarian have made for an awe-inspiring individual we call Mr. Clentzos.

This year, 1974 marks Mr. Clentzos’ last year at Franklin. After almost thirty years as a teacher, fif of those spent at Franklin, he is retiring. He is going home to a lovely wife, a grown son, and the opportunity to do two things he loves best: golf and traveling. Mr. Clentzos has been to most parts of the world; the only place he and his wife haven’t visited this Africa.

What he leaves behind are the memories he has all the thousands of faces of students in an endless parade of names, personalities, and locker numbers. And they too will remember the man with the course gray hair and the stern voice. He is unforgettable. It is then appropriate that we, the Almanac Staff choose to dedicate the 1974 Franklin Almanac, on behalf of all Franklin students everywhere, to the tall, tall monument this man has built . . . we dedicated it to Peter David Clentzos, who, in practically no time at all, will be writing off in an African sunset, fulfilling yet another dream