George Miller and Michael Jonson. Two Of Us 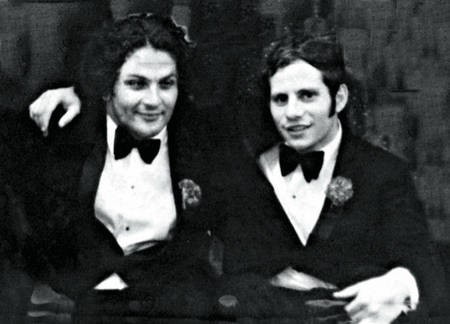 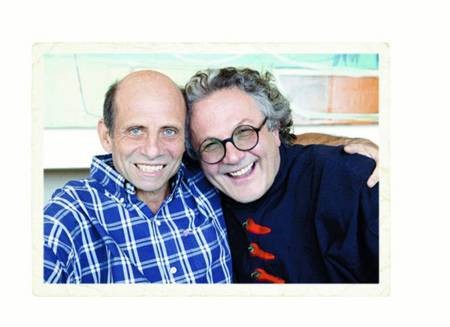 
Director, Dr George Miller, 59 and best friend, pharmacist Michael Jonson, have known each other since they were 12 years old. With Michael funding George’s first film, Mad Max, they talk about the closeness of their enduring friendship over the past 45 years.

Micky was the first person I met on my first day at Sydney Boys High School. At the gate there was a hazing ritual; new boys had the tags ripped off their ties the moment they stepped into the school ground. I grew up in rural Queensland so I was a bit green. Micky, this little kid, came out of nowhere and ran me through the gauntlet. The big boys didn’t lay a hand on us and we never lost our tie tags. We became best friends and have remained such for 45years.

We were never in the same class, or clique, but we did coach rowing together. He coxed the senior eight, and I was struck by his effortless authority; here were the cool guys, a lot older and towering over him, doing anything for him.

When he was fourteen he lost his father, so he took on adult responsibility young. He made it through university and started out in business young. That’s not to say he didn’t like to party, and his family home was always a magnet; on any given afternoon at the Johnson’s there’d be up to a dozen people, playing cards, raiding the fridge and, above all, playing cricket and touch football in the back yard.

Micky has always been a very active sportsman; he played rugby for South Australia and touch football for Australia. Then there’s his thing with racehorses. Basically he’s your classic Australian sports tragic; he’ll cross the globe to watch a horse run, or see a cricket or rugby test.

His big love, however, is women. Since we left school he’d call every few weeks to tell me about a fantastic new person he’d met. He’s always jumping in at the deep end, giving all of himself. It’s happened many times and what is amazing to me is that he retains warm friendships with almost all of them. They all fell in love with him for the same reason I did. He has the biggest heart in the world.

Micky is one of those rare souls who gives a whole lot more than he expects to get back. The paradox is of course, that it comes back to him in spades.

Way back, when we went out to raise money for my first movie, Mad Max, everyone thought I was a bit weird. "What’s George doing trying to make movies? What makes him think he can pull off a feature film with no real experience?” Micky never had a second of doubt. He was the first investor and with nothing but dumb faith in me, he brought in others. Without Micky there would have been no Mad Max or the successes that followed and, some would argue, no kick-starts to the careers of Mel and Nicole and so forth.

Of all the people I’ve known the one of whom he reminds me most is Jack Nicholson (Miller directed Nicholson in Witches of Eastwick). They’re both ridiculously loyal to their friends, always falling for beautiful women and both enjoy the deepest affection of anyone who has had the good fortune to encounter them in life.

Over the last couple of years Micky’s had this Herculean battle with cancer and this has somehow amplified all his virtues and wisdoms. When he called to tell me his diagnosis I was shaken, but then he did something that still boggles me; he said the main reason he was calling was to ask a favour for a friend…could I talk to their kid who was desperate to break into the movie business. Typical Micky. He never lacks courage in anything. Eros, Agape and now facing Thanatos. He’s an ornament to the game.

My father moved out from Cyprus in 1924 to start a family here. We had a really wonderful childhood: our family was always very close and there was lots of love and warmth. Even though we were Greek ozzies, our Greek heritage was always instilled in us, so we were always going to events like The Young Matrons societies: which were formed by Greek mothers who’d have parties for all the Greek kids so they could get together and maintain their heritage.

I first met George and his twin brother John, at Sydney Boys High School. They were new to town and, being Greek, we’d heard about them. I instantly liked George because of his soft, warm, gentle nature. He’s a considerate, caring guy, which is my type of person.

I remember George used to help his father in their chocolate shop, and I always thought his father was a little hard on him, probably because they had four kids and were doing it tough themselves. So when he didn’t have any money to go to the movies, I’d give him two shillings, and we’d hang out and buy popcorn at half time. He said he’s never forgotten it.

We used to get up to a lot of mischief, a lot of which I can’t mention. But there was one time I remember vividly. Being from the Eastern suburbs, we’d heard stories from my older brother and his mates, about these debaucherous North Shore surfie parties. The year George and I were finally allowed to go, we were so excited and our imaginations ran wild with thoughts of hot girls and lots of orgies. But all that happened was a bunch of guys ran around the house naked with lit newspapers in their butts, called ‘rooster tails’. And the older boys were trying really hard to crack onto all the chicks. We both just sat on the couch like little schoolboys.

George was never a typical Greek boy: he did his own thing and was more off-beat and eccentric. He’d do things like wear a Hawaiian shirt to a Greek dance, when everyone else would be wearing ties. Because of this I wasn’t allowed to have him as my best man; I had to have someone conservative. But when I got married the second time, no one was going to railroad me.

He was also popular with all the girls and had lots of girlfriends. The first time he really fell in love he wrote me a five-page letter about it, which I have framed on my wall here at home.

Even though he has gone on to become successful in the entertainment business, he’s actually quite shy and avoids the limelight if he can. One time at university he asked me to go up and accept an award for him, which I thought was silly and said no, but he got his twin brother to. He’s not into big awards nights either: at the Oscars for Babe, he took his niece just so she could experience it.

When George found out I had cancer he wanted to hop on the first plane from Los Angeles and come back, but I knew he was doing a big business deal and told him it could wait a week.

I haven’t felt crash hot of late, but I did have a wonderful, life-changing experience at the Ian Gawler Foundation in Victoria, which is a retreat for cancer patients, and I’ve asked George if he could help me expand the retreat so it’s Australia-wide. He said he’d be more than willing to be the benefactor and do anything he could.

We both spend a lot of time these days hanging out up at his weekender in Whale Beach. At the end of the day I couldn’t have asked for a better friend who has gone through all my relationships, career, kids and marriages than George. In that respect I feel I’ve had a charmed and blessed life. We both do.


This article, was published in the Good Weekend Magazine, which forms part of the Sydney-Morning-Herald, Sydney - on April 30th, 2005, page 18.

Georgia Cassimatis is the author the article.

A brief profile of her life and career, appears below. It can also be viewed - with photograph - at Photography Diaspora, subsection, Working Life.

Georgia Cassimatis began her career as a writer on Australian Cosmopolitan magazine in 1996. After a two year stint, she freelanced for various magazines before being appointed the Editor for teen magazine Barbie. During her time there she met an American man and moved to Los Angeles, which saw her world open up in ways she'd never imagined: she has since worked as a Los Angeles based writer, reporting for lucrative US titles Glamour, Cosmopolitan, Teen and Marie Claire magazines, as well as have her work syndicated internationally.

Born in Australia, Georgia is of Greek decent: her paternal grandfather, John Cassimatis, was born in 1902 in Kythera in the town of Potamos, where his Father was a priest known as Papa Nikolaki. His Mother was Ekaterini Levouni, also of Potamos. He was the 11th of 12 children. Of the nine surviving children, four went to live in Athens and five came to live in Australia, where they had cafes along the Murray River towns. Her grandfather worked in Swan Hill until 1936.

Georgia's paternal grandmother was Georgia Koroneos born in 1917. The second of six children, her father was Panagiotis Koroneos (Poulakis) from Karava and Ayia Pelayia. He was also the President of the Kytherian Society in Athens in the 1930's. Two of his sons went to the USA, and one the aeronautical Engineer returned to live out his life in Agia Pelagia, and the other, became a senator in the Greek parliament.

Panagiotis Koroneos built the wharf at Ayia Pelayia and came to Australia in the late 1950s to find fund raising for the wharf, which lead his travels to many NSW and Queensland towns visiting Kytherians. There is a plaque commemorating his achievement on the wharf.

Georgia Koroneos' mother was Hrisanthi Koroneos who was brought up in the town of Baltimore in the USA where Panagiotis married her, had three kids and returned to Greece.

Georgia's own father, Nicholas Cassimatis, was born in Australia and is a well-known Sydney psychiatrist. Her mother is Anglo Australian with some German blood and loves the Greeks and Kytherian family. Actually her anglo maternal grandfather came to Australia later than her Kytherian forebearers. And Georgia looks Kytherian.