submitted by Kytherian Cultural Exchange on 12.10.2011

Insight into Kytherian-Irish-American who introduced Japan to the world 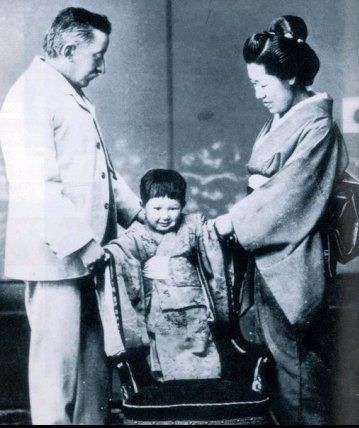 Photograph: Lafcadio Hearn and his wife Setsuko (or Setsu), in Kobe, with their first child, Kazuo, in 1895

NEW YORK’s Japanese community turned out in force at the Nippon Club in Manhattan last week for a lecture on the Greek-born Irish-American writer Patrick Lafcadio Hearn which was delivered by his great grandson, Bon Koizumi.

Prof Koizumi and his wife Shoko travelled from Matsue in Japan for his address to promote an art exhibition, The Open Mind of Lafcadio Hearn , showing at the West 57th Street venue. The exhibition features works by various artists, each focusing on the theme of the open mind of the peripatetic author together with 20 beautifully bound first editions of the books in which he lovingly detailed Japanese folklore and culture between 1890 and his death in Tokyo in 1904.

New York was an appropriate choice for the event given that it was from here the much-travelled Hearn set out on his journey to Japan where he would finally settle, take out Japanese citizenship as Koizumi Yakumo, marry, raise a family and go on to become the foremost interpreter of Japan for readers in the West.

“Lafcadio Hearn introduced Japan to the world,” Tsutomu Karino, executive vice-president of the Nippon Club, told the packed audience of business leaders, academics and diplomats, which included the mayor of Matsue, Masataka Matsuura, and an Irish consular representative, Peter Ryan, who has previously served in Japan.

Karino said he hoped the exhibition would introduce Hearn’s unique spirit to the Japanese people in the US and to the American people generally. “Unlike other western writers from Japan at the time, Hearn wrote about Japan without prejudice.” We should learn how to share Hearn’s open-mindedness, he said.

In his keynote address, Koizumi said: “Hearn wrote about Japanese folklore and culture which otherwise might have been lost,” adding that his great grandfather had also introduced the word tsunami into the English language and that between the Indian Ocean earthquake and tsunami in 2004 and the Japanese one earlier this year, his detailed account of one such event was translated into 10 languages as an instruction in disaster prevention.

Koizumi said New York was an appropriate venue for the exhibition since most of Hearn’s work was first published here.

He said the original Open Mind exhibition was assembled in 2009 in Athens at the American College of Greece. And last year it went on display in Matsue Castle and at the Lafcadio Hearn Memorial Museum (which is curated by Koizumi). It attracted more than 45,000 visitors, he told the enthusiastic audience.

Koizumi said his great-grandfather was born in 1850 on the Ionian island of Lefkas , where his father, Charles Bush Hearn, was stationed as a surgeon in the British army.

His mother was a Kytherian woman, Rosa Cassimati. After Charles was posted to the Caribbean, two-year-old Lafcadio and Rosa were brought to Dublin where he spent his formative years in the then affluent suburb of Rathmines.

Koizumi detailed young Hearn’s holidays in Tramore, County Waterford, and Cong, County Mayo, where he was fascinated by stories of fairies and goblins, of angels and demons.

This ghostly fascination was carried over to his Japanese works such as Kwaidan: Stories and Studies of Strange Things.

Hearn moved to the US at the age of 19 and set out on a career as a journalist, translator of French literature and writer. He achieved considerable journalistic and artistic success in Cincinnati, New Orleans and Martinique in the French West Indies before moving to Japan at the age of 40 where he married into military nobility to the daughter of a samurai, Setsu Koizumi, with whom he had four children and wrote his books on Japanese folklore, religion and culture.

Koizumi said his great grandfather’s open mind was particularly in evidence in Cincinnati where he married a former slave, Alethia “Mattie” Foley at a time when interracial marriage was against the law.

He lived openly with her and for this was ostracised by Cincinnati society and sacked from his job in the Cincinnati Enquirer newspaper.

The location of the exhibition on West 57th Street is an interesting coincidence given that Hearn once lived in a friend’s apartment on the same street.

Just before he set out for Japan in early 1890 he called to the house but was refused admission by a new maid because of his unorthodox attire, most notably a large cowboy hat.

Hearn wrote an angry letter to the friend, Henry Krehbiel, a former colleague from the Enquirer , who at the time was the music editor of the New York Tribune. Krehbiel responded in a similarly angry vein, declaring that Hearn “could go to Japan or go to hell”.

Well, Hearn chose Japan and some 120 years after his departure, his Japanese great grandson was back on West 57th Street to happily inform the American people of his great success in his adopted country.

Meanwhile, at the end of the lecture, Koizumi and his wife Shoko enthusiastically agreed with a suggestion by The Irish Times that since The Open Mind of Lafcadio Hearn has now visited Hearn’s birthplace of Greece, his final resting place of Japan and his long-time home of the US, a visit to Ireland, the place of his ancestors and upbringing, would be appropriate. And the Chester Beatty Library, they further agreed, would be a lovely venue for the exhibition if that were at all possible.

The Open Mind of Lafcadio Hearn is at the Nippon Club , 145 West 57th Street, Manhattan, New York, until next Friday