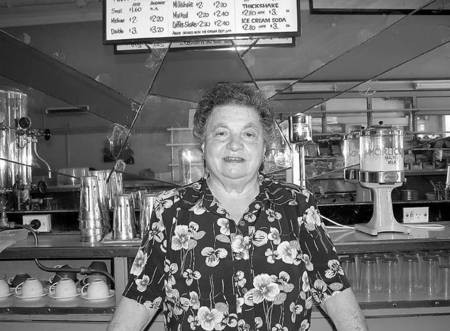 It was the end of an era in Gunnedah at the weekend when Loula Zantiotis, the last of the old-style Greek cafe owners, called it a day at the Busy Bee Cafe.

At 12.06 pm on Sunday, 30th September, sur­rounded by her family, Loula Zantiotis slipped a new padlock on the door saying “yassou - and thanks for the memories.”

Loula has been part and parcel of the Busy Bee since her mar­riage to Peter Zantiotis in 1955.

Born in 1932 on the Greek island of Kythera, between Pel­oponneses and Crete, Loula had been staying with a relative In Sydney when she met the young Peter Zantiotis at an Easter dance in Paddlngton Town Hall.

Unable to speak English, Loula found life in Australia very differ­ent to anything she had experi­enced in her homeland but with courage and determination she became part of the community.

Their life together revolved around the Busy Bee and later their three children Anasta­sia (Tessie), Lambrous James (Jim) and Emmanuel Nicholas (Manni).

Since the death of her hus­band Peter in 1996, 75-year-old Loula has continued to run the Busy Bee - although on a much smaller scale.

“This Is also my home and I have always enjoyed talking with customers and friends who dropped in,” she said.
“I almost sold out three years ago but the time was not right — and now it is.”

Although the early history is sketchy, it is believed the Busy Bee Cafe was built in 1914 as part of the Doolan buildings, with the tea-rooms accessible via an archway through the shop next door, leading to the Grand Central Hotel.

According to a 1926 newspaper advertisement, early proprietors of the Busy Bee were Jim and Andrew Zantiotis, also known as Zantos.

Lambros Zantiotis bought the Busy Bee in 1933 and was joined by his son Peter on March 15, 1936, from the Greek island of Kythera in the Ionian Sea. He had come out to Australia on his own as a 12-year-old, with his mother Anastasia and sisters joining the family after the war.

While other Greek cafes in Gunnedah were modernised and altered to cater for a changing generation, the Busy Bee Cafe stayed the same with Peter Zan­tiotis resisting the urge to install a deep fryer and stove for take­aways at the front of the shop.

Today the Busy Bee Cafe re­mains a warm and friendly place, with a distinctly comfortable and unhurried atmosphere, in the frenetic world of fast-food chains.
The good news is that Loula will still be part of the Gunnedah community, continuing to live upstairs while new proprietors, Toni and Wayne Faint, and their children Nathan, Jennifer and Caleb, take over the cafe.

Loula’s valued customers are already familiar with Toni, who has worked at the Busy Bee for close to three years.
Toni and Wayne are planning to expand the menu to include the old favourites, like fish and chips, hamburgers and hot meals.

Meanwhile, Loula and her family have expressed appreciation to their loyal customers for their ongoing support, especially after the death of Peter Zantiotis.

“We really appreciate every­thing everyone has done for Mum and the generations of custom­ers who have supported the Busy Bee,” said Manni Zantlotis, who now lives in Sydney.

“It has meant a great deal to us as Mum’s customers have become her friends.”

Life has suddenly taken a new direction for Loula Zantiotis but for those who grew up in the era of Greek cafes, with their friendly hardworking owners, there is a sense of loss and nostalgia.

pdf. of the article

Produced by permission of the author Ms. Marie Hobson, and the editor Ron (Rocky) McLean. I thank them both deeply.
[G.C.P].

I wish to make a correction to this article. Anastasia Zantiotis(my grandmother) and one of her daughers, Anna arrived in Gunnedah in 1937. The other two daughters, Evangelia ( my mother) and Poppy, where reunited with their family as displaced persons after the war. They arrived in Australia on April 20 1947 on the Egyptian registered ship SS Misr. An interesting article called "The First Wave Beyond A White Australia " about the vogage of the SS Misr to Australia can be found at http:/smh.com.au/multimedia/misr/start.html