Nick Politis was born in the Patrikio Scholi in Karavas in 1942. He has a deep affection for Karavas, Ayia Pelagia, and Kythera generally. In 2014 he was awarded the Order of Australia. 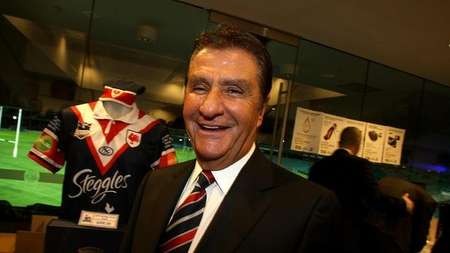 Phil Gould lost one of the first games he coached at the Roosters. In the wash-up, Nick Politis asked him what he thought about the performance of his team.

"Nick," said Gould, preparing a cryptic response in his mind, "when you plant a seed you can't expect to grow a tree overnight."

"Sure, baby," Politis, the chairman, replied. "But do you think you could put a little more water on it just to speed things up?"

Speed things up? It's frightening how fast life goes.

That exchange happened almost 20 years ago to the month.

Life has sped forward so fast for both men - giants of the game in every respect - they barely note the irony and symmetry when you call to ask about this Saturday night when the Roosters play the Panthers in the first week of the NRL finals.

When Gould finished at Penrith with six rounds to play in the 1994 season, as the club continued to wrestle with itself following the death of player Ben Alexander in a car crash two years earlier, he had convinced himself he would never coach again.

Politis and then Roosters director James Packer approached him, convincing Gould to come to the eastern suburbs. Politis has since fallen out with Packer but he and Gould remain close.

They usually talk every day, no matter where either of them are in the world.

Indeed, both are too shrewd, pragmatic and just plain busy running football clubs and billion-dollar empires to concern themselves with sentimentality.

Emotion doesn't sign players for under their market value, lure sponsors or pay for long lunches. Only in the rarest of occasions does emotion bring you victory.

Yet there is no mistaking both find themselves in peculiar territory as Politis' Roosters meets Gould's reconstructed Panthers at Allianz Stadium.

When Gould left the Roosters in 2005, when he was coaching director, he promised Politis he would never coach against the Tricolours.

Six years later, when the Penrith board asked him to come on board as their general manager after they had unsuccessfully tried to poach Tim Sheens as coach from the Tigers, the first person he called was Politis.

"I wanted his blessing," Gould has said, even though the role had nothing to do with coaching.

Politis on Monday recalled it being a light-hearted conversation, but you can be assured Gould would never have taken the Penrith job if Politis was cool on the idea.

The result is there for all to see: alongside Panthers Group boss Warren Wilson and coach Ivan Cleary, Gould has turned Penrith into a side that plays with more heart than any other side in the competition.

The mere thought Penrith could be playing the defending premiers in the first week of the finals, with a second bite at the cherry because they finished fourth, would have been the stuff of fantasy in March.

Not that long ago, Wilson and Gould sat down and they wondered how they could keep the doors open for the Panthers leagues and football clubs.

"He's done a terrific job," Politis says. "Nobody can dispute that. There was never any doubt that he was going to do a great job. He's got the know-how and the smarts when it comes to everything about rugby league."

Both men have their detractors and Politis' critics will tell you he has tried to bring premiership success to the Roosters through his pockets, which are far deeper than most.

Yet, in an era of a strictly enforced salary cap, premierships aren't necessarily bought. Sonny Bill Williams is a two-code superstar and James Maloney was snaffled from the Warriors but players such as Aidan Guerra and Jake Friend have vastly improved since their last contracts were signed.

Then there's the coach.

Trent Robinson signed on last year for $250,000 as a rookie coach. He's on the verge of becoming the first since Wayne Bennett in the early 1990s to defend a title.

Gould and Politis wouldn't bite on how much dialogue would be exchanged this week. Gould won't even be there on Saturday night: he'll be in Townsville, calling the Cowboys-Broncos elimination final later that night as Politis watches from the chairman's lounge.

But if you want to know how he might be feeling, read this from a Sun-Herald column.

"In the end the battle becomes trying to do something for Nick or give him something without him giving you anything."

That was written on grand final day in 2002, when the Roosters beat the Warriors.

You can speed things up, but some things in life forever stay the same.