People > Life Stories > Our Greeks have kin on Kythera

Our Greeks have kin on Kythera 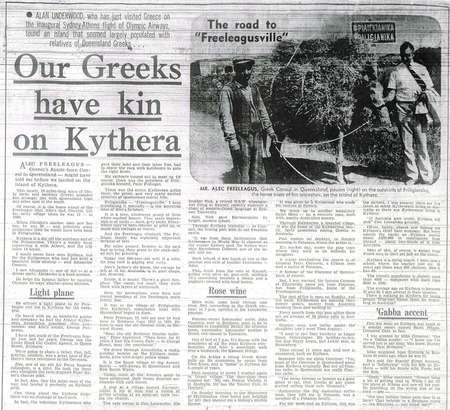 Alan Underwood, who has just visited Greece on the inaugural Sydney-Athens flight of Olympic Airways, found an island that seemed largely populated with relatives of Queensland Greeks…

Alex Freeleagus, Greece's Aussie-born Consul in Queensland — might have told me before we landed on the Island of Kythera. This lonely, 14-miles-long mass of flinty rocks and leathery Greeks probably has stronger ties with Queensland than any other spot in the world.

Of course it is the home island of the Freeleagus clan. Alec's dad, Christie, left his rocky village when he was 12 - in 1900. When Christie's mother next saw the boy when he was 30 — and infinitely more prosperous then he would have been back at Friligianika.

Kythera is a dot off the southern end of the Peloponnese. There's a weekly ferry connecting it with Athens, and the trip takes 14 hours. I would never have seen Kythera but for the Kytherians who had just built a beautiful little airstrip — and Alexander Onassis.

I met Alexander - son of Ari - at a party. Alexander is a keen airman.
He helps his famous father by running Olympic Airways charter-plane division.

He offered a light plane to fly Free¬leagus and me to Kythera for the week¬end.

On board with us, as wonderful guides and company we had the Athens Kytherian Association President (Con Lourandos) and Alec's cousin, George Panaretos.

I have lost track of the Freeleagus family tree, but for years, George ran the Lucky Black Cat Casket Agency, in Queen Street, Brisbane.
We're going to share a ticket. Con, tall, greying, soldierly, was a great hero of Kythera's fierce resistance to the Germans.

Alec, one of my old Air Force Reserve colleagues is a pilot. He took the front seat alongside the twin-engined Piper Aztec’s charter pilot.
In fact, Alec flew the Aztec most of the way and landed it perfectly on Kythera strip.

One thing about the Kythera strip: there was no shortage of hard rock,
In fact, the volunteer Kytherians who gave their land and their labor free, had to shave the rock with bulldozers to gain the right levels.
Six carloads turned out to meet us. Of course, there was the president of Friligianika himself, Peter Frilingos.

There was the entire Kytherian police force, the priest, and very many excited relatives of Queensland consul Alec.

Friligianika – “Freeleagusville”, I kept translating it mentally - is the ancestral base of Alec's forbears.

It is a tiny, windswept group of little white-washed houses. Your Main impression is of rocks a - hard, grey rocks. Everywhere they have been cleared, or piled up, or made into cottages or fences.

And the Freeleagus windmill. The Freeleagus's was especially important
because of this. For miles around, farmers in the past had to bring their grain to the cloth-sailed mill for grinding. Today the 200-year-old mill is a relic. Its iron roof is gaping and rusty.

Alec's father's old home, the cottage he left at 12 for Australia, is in good shape, but deserted. Inside it is musty. There's a giant fireplace. The rooms are small, their walls thick with layers of whitewash. Here, for generations, were born and reared members of the Freeleagus main family line.

It was in the village of Friligianika Kythera’s remarkable links with Queensland began to show.

Peter Frilingos, 73, told me how he had been in Brisbane front 1922 to 1935. He used to own the old Central Café in Edward Street. “Near the-old Brisbane Courier building," Peter explained. "Then later, for 61 years I had the Crown Cafe — in George Street, near the courthouse."

We drove through Arondianika, a rocky, scrubby hamlet on the Kytherian moorlands, alive with bright yellow bloom. It is the home village of the Aroney family — well-known in Queensland and New South Wales.
Today most of the Aroneys seem to have emigrated, their farms deserted enclosures with rock fences.

A stop at a village named Karvounades. A sip of ouzo and a nibble of grilled octopus at an open air table facing the church.

Through Kythera township – to Kapsali, the fishing port with its old Venetian castle. "It was from these battlements that Kytherians in World War II cheered as the cruiser Sydney sank the Italian warship Bartolomeo Colleoni, one of the locals told me.

Back inland, it was lunch at two at the pension and cafe of another Lourandos - John. Fish, fresh from the nets at Kapsali grilled with olive oil, goat-milk mizithra (it's something between a cheese and a yoghurt) covered with local honey.

More ouzo, some local vintage rose wine. Bed according to the Greek custom at 3 p.m., upstairs, in the Lourandos pension. Pension-owner Lourandos' uncle, John Cominos, now in Brisbane, used to be in business in Gladstone. Before the alumina boom, regrettably. Lourandos's brother is Greek vice-consul in Tasmania.

Out of bed at 7 p.m. It's dinner with all the presidents of the main Kytherian communities. And later a moonlight walk — over a landmark, the Katouni Bridge.

On the bridge a young Greek driver pulls up. He announces he comes from Glen Innes, and is "home" in Kythera for a couple of years.

Next morning at seven I strolled again in Livadi village. The shoe-shop man stopped me: "My son, George Vlandis, is in Australia. He has the Tourist Cafe, in Gosford."

On Sunday morning, in the Monastery of Myrtidiottisa (free board and lodgings for all) they showed me a bishops marble throne. It was given by a Kytherian who made his fortune in Sydney.

We drove up to another monastery Saint Moni — on a concrete road, built with mostly Australian money.

Through Kalokerines, a deserted village. It was the home of the Kalokerinos family, fairly prominent among Greeks in Australia.

Past women on donkeys, to Sunday morning in Potamos, where the action is. Its market day, under the pine trees - where they used to tie bullocks for slaughter. A statue overlooking the square of General Peter Coroneos, a Crimea hero and a native of Potamos. A forebear of the Coroneos of Queensland, of course.

But, I was warned, the famous Corones of Charleville came not from Potamos, but from Friligianika, home of the Freeleaguses.

The post office is open on Sunday, and the bank. Kytherians are opening up their money orders, mostly from Australia, banking them, and cashing them. Every month from this post office there is an average of 20 phone calls to Australia.

Sipping ouzo and coffee under the slaughter tree I meet Theo Argery:
"I used to run the butchery in Logan Road, Greenslopes. My brother-in-law, the late Harry Lewis, had Lewis' cafe, in Bundaberg."
Theo retired 11 years ago, and now is contented, back on Kythera.

Someone tells me about Cominos: “Yes, most of the Cominos in Queensland come from Kythera originally. But not all Comino cafes in Queensland are really Comino cafes. “The name became so famous as a good place to eat, that Greeks of any name started calling their cafes 'Comino's’."

Andronicus the Big Australian coffee man, they told me in Potamos, was a member of a Potamos family.

Olives, honey, cheese, fishing are Kythera’s chief local economy. But every month the banks on Kythera receive about A$50,000 in remittances from abroad - about two-thirds of it from Australia.
Most of this, of course, is money from Greek sons to their old folk on the island.

Kythera is a dying island. I went into a school, where, the teacher told me, 50 years ago there were 500 children. Now it has 60. The islands population is slightly more than 4000 - compared with more than 8000 in 1940. The average age on Kythera is between 35 and 40. I met several in their nineties. There is nothing on Kythera for young people. Who can blame them for migrating to Australia?

Our last meal on Kythera was lunch at a seaside resort, named Saint Pelagia, Conomos Cafe, in fact. I was greeted by Mike Conomos. "Gee,” (in a Gabba accent) — "I know you. I've served you in my shop. You know, Stanley Street, East Brisbane."

Mike migrated from Kythera to Brisbane 24 years ago, when he was 17.
He's sold the Stanley Street business, and is "holidaying" with his folk on Kythera — with his Aussie wife, Freda and the kids. "Gosh" - Mike confessed. "Greece takes a bit of getting used to. When I got off the plane at Athens and saw all the traffic travelling on the wrong side of the road – gee.”

“See that holiday house next door to us here? That belongs to a Brisbane crowd - the Sourrises - you know 'em?”