Peter V'landys honoured with an OM on Australia Day

Peter was one of three Kytherians honoured on Australia Day, 2014. The others were Angelo Notaras, and Clary Castrission

Kudos flows to Peter V'landys, the man who got bookies to pay their way

This tough guy in a tie hasn't forgotten where he came from. 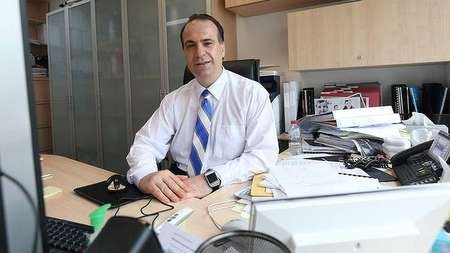 Fighter: Peter V'landys at his desk. ''Everyone knows I'm the gunslinger,'' he says. Photo: Anthony Johnson

He has taken on the prime minister, the Pope and then a force of nature larger than all of them - the corporate bookmakers.

The common line proffered from more than one stakeholder in the multibillion-dollar racing industry nails him in one: ''He'd rather a fight than a feed.''

''I take that as a compliment,'' says Peter V'landys, chief executive of Racing NSW. ''I'm proud of that. I know in myself that I'm a tough negotiator. The people who don't like me - and I know there are people who don't like me - are the hangers-on and the parasites, and I don't have any time for them either. You help the good people. Everyone knows I'm a hard negotiator. Everyone knows I'm the gunslinger.''

On Sunday, the most powerful and equally controversial man in NSW racing will be named in the Australia Day honours as a Member of the Order of Australia.

It will be a triumph for the obstinacy and resolve of V'landys, the third-youngest boy of Greek migrants who came to Australia in the 1960s in search of a better life.

It will be recognition for the fact V'landys has earned roughly $1 billion for his sport since his appointment in 2004, after navigating it through several major crises, and despite how some in a sport flush with old money and dynasties still consider him.

''There are some of them [in the racing industry] who think, 'What's an immigrant bloke doing running racing?','' he says. ''No matter what you do, there's still racism. And you live with it. I still cop it. This award is for all the hard work my mum and dad put in.''

They say you know when V'landys has had a big day of work at the track, because his shirt is hanging out the back of his pants, and his hair is all fuzzed up. His suit is more Kelly Country than Hugo Boss. He'd rather roll up his sleeves than worry about whether there's a French cuff at the end of them.

When the equine influenza outbreak threatened to cripple racing in 2007, it was V'landys who personally squeezed a $235 million rescue package out of the prime minister, John Howard.

The scene: the son of poor Greek migrants wanting millions from one of the country's shrewdest PMs.

''You couldn't describe it better,'' he says. ''I thought, 'What am I doing here?' But we're all the same. John Howard is the same as me. I can talk to him but have the same respect for the guy who collects the rubbish at Randwick racecourse. I treat them the same. That's how I was brought up. I treated him as John.

''I told him there were 50,000 people out of work, and we got offered $5 million from the federal government. I said, 'I'm not taking that. That's ridiculous.' Some other administrators might've said that's enough but I didn't.''

A year later V'landys negotiated $40 million from the federal and NSW governments, and the Catholic Church, when the church held World Youth Day at Randwick racecourse.

Then he marched the cashed-up corporate bookmakers all the way up every step of every court in the land, ending with the High Court, as he pushed through legislation that handed the racing industry $150 million in frozen funds and a further $60 million each year.

''I've never made a decision that was easy for me,'' V'landys says. ''If I went the other way, I'd never forgive myself. I knew I could've sat here and made a nice crust and let the racing industry die on the vine. Sometimes you have to fight. If you don't lose blood in your job, you're not doing your job.

''If you look at the personal crap I went through and continue to go through … Nobody saw the trolls that I saw. At one stage, when I read them, I started hating myself.''

He chuckles. It's difficult to tell if it's self-effacement or just for show.

''One guy came in for an interview here, saying he wanted to meet me,'' he continues. ''He wanted to tell me that the directive of the boss - and I won't tell you the name of the bookie, but he was one of the leading ones - was to get on all the [internet] forums and make up a name and bad [mouth] V'landys when we had spare time. Just give it to him.''

In many respects, they picked the wrong bloke to brawl with, because V'landys has been fighting his whole life. He grew up in Wollongong, and his father, Nicholas, worked 18 hours a day in the steel works.

''And he was better than that,'' explains V'landys. ''Because he didn't have the language, that was the best he could get. He was a 'doubler'. He worked every day from 6am and he would normally finish at four, but then he would do a doubler. He'd finish at 1am, then start at six again. He retired when he was 60 and died when he was 64.''

His mother, Katerina, is still alive.

''I stalked that horse,'' he explains. ''I would go to Harold Park. I caught the train and snuck away and my parents didn't know where I was. I'd stand at the gate and watch him. From the age of about seven or eight, I would be at the TAB. I was the TAB's youngest customer.

''I got this bloke who was 18 to bet for me, and the bastard would charge me a commission. Every time he won, he pocketed 20 per cent but I didn't care because I just needed to get the bets on.''

A talented rugby league player, V'landys sank the wages he earned managing a hotel in Wollongong into buying the Courthouse Tavern when he was only 19. ''I used the catchphrase, 'You can be the judge'.''

Then, in the late 1980s, he became chief executive at Harold Park at just 26, turning it from a $1.5 million basket case into the black within his first 12 months.

In 2004, he was approached by Racing NSW - then known as the Thoroughbred Racing Board - to become its chief executive. He had already accepted a lucrative position at the New Zealand TAB, but the board was adamant that V'landys was its man and convinced him to sign.

Since then, he has become racing's most influential man.

Messara is the founder of the Championships, the $18 million carnival to be held over two Saturdays at Royal Randwick next year that will include 10 group 1 races.

Right. How many did you get rid of?

Suggest the Racing NSW board gives him too much autonomy, and V'landys is defensive, punching his way out of the corner as always.

''No,'' he says, bluntly. ''This board is very professional in terms of corporate governance. A lot of times I get blamed for things that I've argued against. There have been many times when things have gone pear-shaped that I argued they would go pear-shaped. But they're the masters. No one will ever know any issue where I didn't agree. You're a team, you're loyal.''

Then he takes a swipe - unprovoked - at the Australian Turf Club.

''That's where the ATC, that's where I feel sorry for Darren [Pearce],'' he says. ''They don't let him be a CEO. They get too involved in the micro. They should be the macro. Darren's got immense ability as an administrator. Let him run the joint, but they don't.''

I point to a lavish, glossy brochure on the table detailing the Championships and ask if this is a move towards Racing NSW taking over the ATC, which has been the street-corner tip for months.

''Not at all,'' he bristles. ''Racing NSW will never run a race club. I'm aware of the rumours. It's always used against us when we are tough about something. 'Oh, you are just trying to take power off us.'

''I want the race club to be autonomous. I want to help them. I got $150 million for the grandstand. We can't run race clubs - we're the regulator. It's a scaremongering tactic used against us by people who think we're too tough.''

V'landys equally dead-bats questions about whether he was the pea to become David Gallop's replacement as NRL chief executive last year.

Asked if he was interested in the position, he says: ''No, not really. It was never offered so it's a hypothetical question. My chairman came to me and asked if I was interested, and I was honest and said no.''

There is a school of thought that V'landys was looking for more money from his next Racing NSW contract, although others say he was genuinely interested in the NRL job.

When we meet in his office at Racing NSW headquarters in the CBD, he shows me his new watch - a phone and camera all in one. ''I have a thing for gadgets,'' he explains.

At home, he has old-school Space Invaders and pinball machines.

''I'm very proud,'' he says. ''I have the highest score in both the pinball and the Space Invaders. My wife beat the high score I had on Space Invaders and I was devastated. I practised for weeks and weeks and I beat her.''

Always fighting. Until he wins.