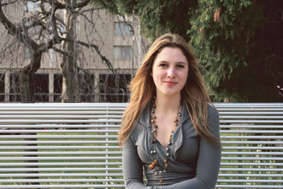 Getting a foot in the door

UTTER the words 'community television' and the standard image people have is of a bunch of bludging Uni students sitting around a trashed office hatching half-baked ideas of what they're going to beam to a handful of TV screens around the city.

Yes, RMITV's city office is a serious mess - piles of old magazines and newspapers stand like paper-riddled pillars, the walls are covered with cut-outs and posters that only partially cover the room's horrific paint-job, and the air is filled with the stench of stale coffee and what I'm praying isn't asbestos. But alone at the front desk sits this production company's PR and Marketing Manager Victoria Simos, holding a phone in one hand and typing a press release with the other. At 19 years of age this Melbourne-born Australian Greek studies Media and Communication at university, has a part-time job and tries to salvage what's left of her social life while putting in the hours every week to secure sponsorship for RMITV's various productions which screen on Channel 31.

"I just love the media," she says, crossing her legs on the overstuffed cushions of the office's plush white couch. "I've always wanted to work within the media, but I'm not sure where. I just want to get my foot in the door and figure out what I can do, what I enjoy and what I'm good at. I love working here because they let you try a little bit of everything. I've written press releases, had articles published, I've presented a few things on TV. I'm testing the waters."

It's been about a year since Victoria took up her post. Since then her hours chasing sponsors, promoting individual shows and looking after the production house itself have been very sporadic. On a slow week Victoria may put aside as little as five hours, but when their bigger shows are up and running, it can become a full-time commitment.

Victoria's solid work ethic is paired with an innocent self-consciousness, as she carefully crafts her answers in an L-plated PR style. But it wears off immediately as she laughs and lets out an exhausted sigh about the art of dealing with sponsorship.

"Oh man!" she exclaims, throwing her head back and running her hands messily through her hair. "It can be difficult to secure financial sponsorship because we're not that well-known, and obviously we need the money to update our resources. You just need to keep on going at it and eventually someone will help out. Because we have a very open and localised focus, we target grassroots organisations like ourselves. That way we get our name out there and so do they."

RMITV, like Channel 31, is run almost entirely by volunteers who, like Victoria, are students looking to get into the media. The programs RMITV help produce are as diverse and eclectic as the student body of any university campus, where various cultures and tastes collide. While trying to cater to their vast audience, RMITV's main priority is to offer those who are willing to contribute the opportunity to 'have a go'.

"We're big on open-access," Victoria says. "Our main focus isn't whether we think a show is 'good' or not, depending on how you define 'good'. It's based on whether we can physically do it while taking cameras, crew and studio-time into consideration. It's about giving people experience and doing hands-on work and getting their creative ideas out there rather than judging whether we think it will get ratings. That's not our focus."

Victoria first heard about a vacant marketing position at RMITV via email. Although she had a year of uni under her belt, her marketing credentials were limited. But given time Victoria gained experience she says she couldn't learn in any classroom.

"At school they show you how to structure a paragraph and how to do a press release which is great," she remembers. "But here you need to think about what's the best way you can pitch ideas and who's more likely to respond to them favourably. You learn a little bit more about the social climate because it's all about networking. Even if you know nothing about it, you come here, you make a mistake and you learn from it. It's trial-and-error. The more you do it the better you get. We're just after a willingness to help out."

Victoria's position also means sitting on the RMITV board of directors, who decides what shows go to air. RMITV's productions range from award-winning multicultural talk shows to a variety program produced by a 13-year-old! But with this diversity comes a lot of harsh criticism, stemming from ignorance about how much work actually goes in to each production.

"The hardest thing is trying to get people to take community organisations seriously," she says. "People undervalue and underestimate it. Just because it's run on a volunteer basis, that doesn't mean the skills we have are any less valuable. Everybody has to start somewhere and that's what RMITV is great for - letting people come in and giving it a go and some have gone on to do amazing things. We do real work which can get us employment in the long-term."

When asked whether she gets frustrated about the amount of work and lack of recognition, she responds with a profuse shake of her head.

"No way," she says. "It's invaluable experience. I'd rather be doing something I love where I'm flat-out working rather than something boring that I hate. It's fun and social and everyone who works here wants to be here. Most of us are busy with school and other commitments, but there's always a positive attitude. When I go on to do paid work I still want to have that same buzz."