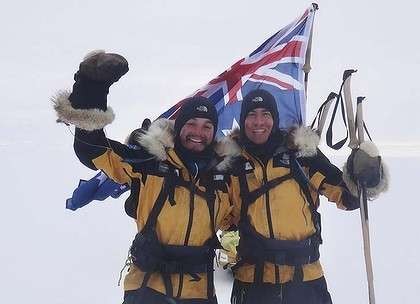 
Made it! After no fewer than 89 days, trekking a little more than 2250 kilometres in appalling conditions, yesterday - still Australia Day in their time zone - the Sydneysiders James Castrission and Justin Jones succeeded in their attempt to trek from the Antarctic coast to the South Pole and back, unassisted.

''We're shattered, physically, mentally and emotionally,'' a slurring Castrission said over a scratchy line, in their first interview since arriving at Hercules Inlet on the coast of Antarctica that lies closest to South America, about 1000 kilometres to their north.

And yet still their travails are not quite over. For when the Russian plane scheduled to pluck them to safety came over, it could not land because of dangerous winds and poor light, and was not even able to drop fresh supplies.

The lack of supplies was particularly significant because since day 36 the two - who first came to fame in 2008 by becoming the first to paddle a kayak from the east coast of Australia to the west coast of New Zealand - have been on half-rations every second day, and have lost 50 kilograms between them.

''We're absolutely starving,'' Castrission said simply, while Jones was out and about, trying to put markers out for the aeroplane to make a second attempt to land in perhaps 12 hours' time. ''All I want right now is a big meat pie with loads of tomato sauce and a big beer in my hand … but that is still a long way away,'' he said.

For much of their journey it was, in fact, touch and go as to whether they would be able to make it.

''The absolute worst of it,'' Castrission said, ''was early on, when I fell into a crevasse, and had that sickening feel of complete nothingness beneath my feet. It completely scared the bejesus out of me, and I realised the enormity of what we were trying to do.''

Fortunately that particular crevasse was not deep and though he broke a ski-pole in the fall they managed to repair it ''in extremis'', and push on, through unseasonable blizzards, into the endless white nothingness, hauling their carefully calibrated supplies on sledges, up to the polar plateau that lies 3000 metres above sea level, and onwards from there.

And, just as 100 years ago, from the other side of Antarctica, there was a famous race between small teams led by Scott of the Antarctic and Norway's Roald Amundsen to be the first to get to the South Pole - won by Amundsen and his men by 34 days - the two young Australians became aware there was a young Norwegian man out there in the polar wilderness with them, Aleksander Gamme, attempting to do exactly the same thing.

Gamme reached the South Pole a couple of days before them, and although they never sighted him as he took a different route back to Hercules Inlet, in a particularly noble gesture the Norwegian waited for the Australians, south of the inlet and they finished their journey together, arm-in-arm, ski poles lifted high in triumph.

''He's a great guy, and now we're all here together, waiting for the plane,'' Castrission said.

On Castrission's Australian companion, asked if, after enduring everything they have been through together, he and Jones are still friends - for Antarctica literature is littered with examples of partners becoming enemies under polar pressure - Castrission gave a tired laugh and said ''He's still going to be my best man at my wedding in a couple of weeks' time, so the answer is yes. We just can't wait to get home.''