submitted by Kytherian Cultural Exchange on 28.09.2011

The Open Mind of Lafcadio Hearn in New York

The Nippon Gallery is pleased to announce the opening of “The Open Mind of Lafcadio Hearn in New York-Book and Art Exhibition”. 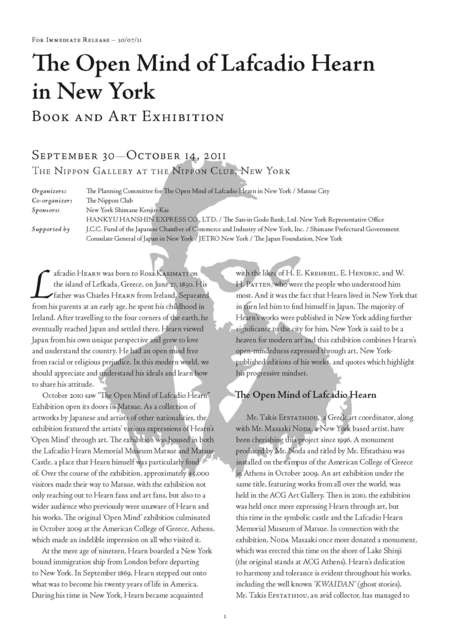 Lafcadio Hearn was born to Kytherian, Rosa Kasimati, on the island of Lefkada, Greece, on June 27, 1850. His father was Charles Hearn from Ireland. Separated from his parents at an early age, he spent his childhood in Ireland. After travelling to the four corners of the earth, he eventually reached Japan and settled there. Hearn viewed Japan from his own unique perspective and grew to love and understand the country. He had an open mind free from racial or religious prejudice. In this modern world, we should appreciate and understand his ideals and learn how to share his attitude.

October 2010 saw “The Open Mind of Lafcadio Hearn” Exhibition open its doors in Matsue. As a collection of artworks by Japanese and artists of other nationalities, the exhibition featured the artists’ various expressions of Hearn’s ‘Open Mind’ through art. The exhibition was housed in both the Lafcadio Hearn Memorial Museum Matsue and Matsue Castle, a place that Hearn himself was particularly fond of. Over the course of the exhibition, approximately 45,000 visitors made their way to Matsue, with the exhibition not only reaching out to Hearn fans and art fans, but also to a wider audience across a broad spectrum who were unaware of Hearn and his works. The original ‘Open Mind’ exhibition culminated in October 2009 at the American College of Greece, Athens, which made an indelible impression on all who visited it.

At the mere age of nineteen, Hearn boarded a New York bound immigration ship from London before departing to New York. In September 1869, Hearn stepped out onto what was to become his twenty year of life in American. During his time in New York, Hearn became acquainted with the likes of H. E. Krehbiel, E. Hendric, and W. H. Patten, who were the people who understood him most. And it was the fact that Hearn liven in New York that in turn led him to find himself in Japan. The majority of Hearn’s works were published in New York adding further significance to the city for him. New York is said to be a heaven for modern art and this exhibition combines Hearn’s open-mindedness expressed through art, New York published editions of his works, and quotes which highlight his progressive mindset.

The Open Mind of Lafcadio Hearn

Mr. Takis Efstathiou, a Greek art coordinator, along with Mr. Masaaki Noda, a New York based artist, have been cherishing this project since 1996. A monument produced by Mr. Noda and titled by Mr. Efstathiou was installed on the campus of the American College of Greece in Athens in October 2009. An art exhibition under the same title, featuring works from all over the world, was held in the ACG Art Gallery. Then in 2010 the exhibition was held once more expressing Hearn through art, but this time in the symbolic castle and the Lafcadio Hearn Memorial Museum of Matsue town. In connection with the exhibition, Noda Masaaki once more donated a monument, which was erected this time on the shore of Lake Shinji (the original stands at ACG Athens). Hearn’s dedication to harmony and tolerance is evident throughout his works, including the well known ‘KWAIDAN’ (ghost stories). One avid collector who has managed to gather together an enviable collection of valuable editions of Hearn’s works, boasting Hearn’s debut publication as the piece-de-resistance, is Takis Efstathiou. He continues to play a part in increasing awareness of Hearn’s open minded philosophy by giving others the opportunity to view these rare books.

‘The Open Mind of Lafcadio Hearn in New York’ will display 20 pieces which were exhibited in Matsue, 1~2 pieces from the American College of Greece,and 2~3 of Hearn’s cherished personal items from the Lafcadio Hearn Memorial Museum Matsue. The exhibition will be housed in the ‘Nippon Gallery’ (The Nippon Club, NY). The Nippon Club was established in 1905 by Dr. Jokichi Takamine and currently boasts 1,100 members. The club oversees events to promote Japanese-American relations and to cater to the Japanese community residing in New York.

Although Hearn and Takamine didn’t actually meet, they were both enthusiastic about the New Orleans Exposition, and when Takamine returned to Japan, he took the opportunity during his lectures to call on the Japanese government to give precedence to people such as Hearn who showed compassion for Japan, and would introduce Japan to the world. The exhibition will be held for a duration of two weeks in the ‘Nippon Gallery’, located on the first floor of ‘The Nippon Club’ premises. By creating the opportunity to view this exhibition in New York, we hope to spread awareness of Hearn’s way of life and open-minded philosophy amongst club members and throughout New York.

There will be a display of over 20 beautifully bound first editions of Hearn’s books, mostly published by New York publishing houses such as Harper & Brothers, Houghton, Mifflin & Co., and Macmillan & Co.

There will also be a quotes display, revealing Hearn’s open mindedness to the reader, along with complimentary explanatory notes by Bon Koizumi, (Hearn’s great-grandson).

The exhibition will be held in the cooperation with Matsue City, The Nippon Club, the Shimane-New York Association and Sanin Godo Bank New York Branch. There will also be a panel display featuring Hearn’s beloved city of Matsue so that you too may enjoy and learn about the town in which Hearn made a lasting impression.

Hearn was the first author to disseminate the word ‘Tsunami’ with the west. Deeply moved by the human suffering of the Great Sanriku Tsunami of June 1896, and it wasn’t long before he put pen to paper and produced his next story, ‘A Living God’, which was posted in the December issue of the ‘Atlantic Monthly’. The book recounts the true story of the Kishu-Hiromura village leader, Hamakuchi Goryo. Hearn depicts Hamakuchi’s tact and high sense of morals as he attempts to curb human suffering during the aftermath of the 1854 Ansei-Nankai earthquake.

By viewing a first edition of ‘A Living God’ at this exhibition, visitors may see Hearn’s unprecedented curiosity and awe for natural disasters, as well as the importance of this visionary man who passed these things on to succeeding generations.

By the sheer power of his penmanship, Hearn increased awareness of natural response throughout the world, including New York. This exhibition aims to offer support to those affected by the Eastern Japan earthquake.

About The Nippon Club

Founded in 1905 by the renowned chemist, Dr. Jokichi Takamine, The Nippon Club strives to tighten the unity of the Japanese community and strengthen the relationship between the United States and Japan. For over 100 years, The Nippon Club has fostered exchange between these two nations by hosting an eclectic range of events. These include art exhibitions, sports tournaments, business workshops, and instruction in contemporary culture and traditional Japanese arts. The Nippon Club takes pride in its role as one of New York’s oldest cultural institutions and looks forward to a continued role in serving the community in the next century.