On the 1st of March 2012, Nicholas P. Careedy (Karydis) born in the village of Milopotamos, celebrated his 100th birthday at a large gathering of two hundred and twenty five invited guests. The luncheon was held at the Wavell Heights Bowls Club in Brisbane, Queensland where Nick has been a member for the past 46 years. His wife Nina (formerly Kalaf) with the assistance of their daughter Marietta, put many hours of work into planning and organising this very successful and happy occasion. Nina hosted the party with good cheer and dignity, while her brother Robert Kalaf, from Port Macquarie in New South Wales, was the emcee for the event.

Among the many speakers to pay tribute to Nick, were retired priest Father Gregory, Father Tom and Father Lawrence from St. Paraskevi Church on the north side of Brisbane at Taigum,. They were followed by President of the Hellenic sub-branch of the R.S.L. Queensland, Colonel Vlas Efstathis, State President of A.H.E.P.A, Chris Georga, and President of St. Paraskevi's church committee, Dr. Peter Marendy. One of the speakers was their daughter Marietta who expressed her love and gratitude for her parents.

Manuel Kallinikos presented Nick with a plaque giving him life membership of the Greek Community of St. George, Brisbane. Mervin Clark, former president of the R.S.L., South Eastern District of Queensland Branch read out the many letters of congratulations which came from state and federal government leaders, including one from the Queen.

Over the years Nick has made an outstanding contribution to the Greek community in Queensland.

He has been a member of the Kytherian Association of Queensland since 1937and is among its oldest living members.

He was Supreme President of A.H.E.P.A. in 1972 and is a life member of this organisation. Nick devoted twenty years of service to the local community including fund raising for the disadvantaged in distant places like Uganda, Africa.

He founded the Hellenic sub-branch of the R.S.L in 1986 and was president for thirteen years.

In recognition of his dedicated service to the community, Nick was presented a Multi Cultural Service Award by the Premier of Queensland in 1997. This was followed by the Order of Australia, presented by His Excellency Major General Peter Arnison AO Governor of Queensland in 2000, for services to the Greek community.

Congratulations for a life well lived! 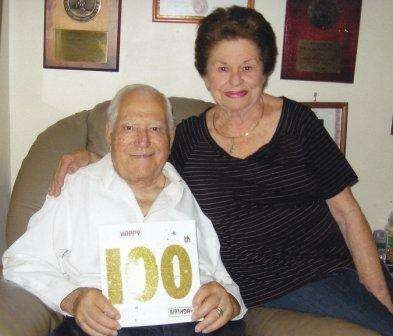