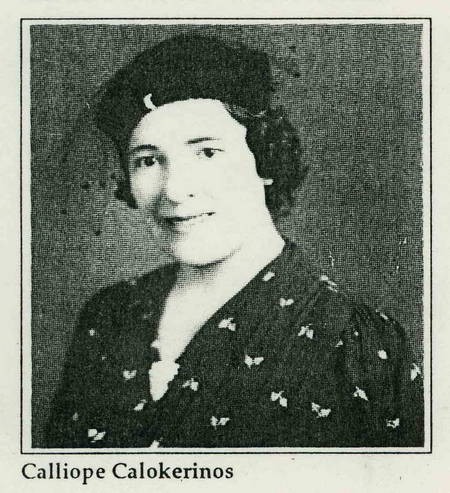 A Tribute to My Great Aunt Calliope Calokerinos
by Mia Mattis

My great aunt, Calliope Calokerinos, formerly Calliope Cassimates, was born in 1898, in the Kytherian town of Pitsinianika. She was the oldest of 11 children. In 1922, she came to America, and married Valerios Calokerinos, also of Kytherian descent.
Valerios was already a resident of Pinole California, and the owner of a 40-acre chicken farm. Calliope and Valerios settled on the farm, and by working together they established a successful business. Their farm was well known throughout the East Bay for its fresh, high quality eggs.

But, life on the farm wasn’t only hard work, it was also a place for nearby Kytherian friends to gather and have some fun. Calliope and Valerios especially enjoyed having Sunday picnics on the farm with their friends.

In 1950, Calliope and Valerios sold their farm, and moved back to Kythera. But once they had settled on the island they discovered that their hearts were still in California. So in 1952, they packed up again, and moved to Richmond, California, where they would spend the rest of their years.

Calliope and Valerios didn’t have any children of their own, but after they had been in Richmond for some time, Calliope’s niece, my mother Cleo, came from Kythera as a foreign exchange student. My mother only stayed with them for a year, but in that time they all became very close. Thorough Calliope, my mother learned about life in America, and through my mother, Calliope learned about the trials and tribulations of teenagers.

Within a year my mother met and married my father, George Mattis, and they both moved to San Francisco. Although separated by the Bay, the four remained close, and even spent Sundays together.
Calliope loved nature. She was always her happiest when she was in her garden. To say that she had a “green thumb” would be an understatement., it was more like a “green hand.” Everything she touched, flowers, trees, vegetables and fruits flourished under her care.

She was greatly loved by her neighbors who affectionately called her Clara. She also had great love for her close friends, and although her friends were not great in number, they were great in character, just as she and her husband were.

From the time Calliope came to America, she regularly sent packages of clothes back to Pitsinianika. She became known as the Mother Theresa of Pitsinianika, for her kindness and generosity whenever there was a need and even at time when there wasn’t.
Valerios died in 1978, and Calliope remained in Richmond, keeping busy with her beloved garden and her friends.

At the time of her death, Calliope showed the generosity, which had been evident throughout her life. She became one of the first benefactors of the Annunciation Cathedral in San Francisco. Thanks to her generous contribution, she managed to become a driving force behind the Cathedral’s building fund. She gave the community hope that its new facilities could be built, and through her generosity inspired others to give.

Now you have heard my aunt’s history. You have heard what a wonderful and generous woman she was both in life and death. But before I go, I would like to tell you how I felt about my aunt.

From the time I could speak I named her “Thea Opie,” and that is how she stayed. She was the closest thing to a grandmother that I ever had, and I loved her as if she were my true yiayia. 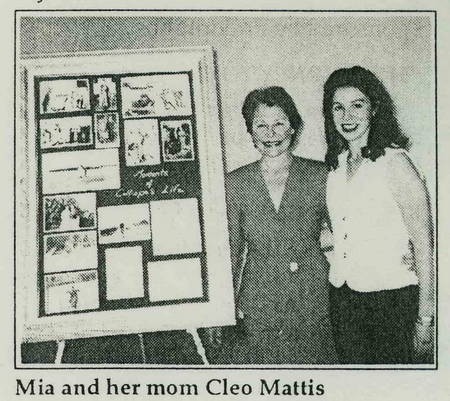 I visited Thea every weekend in Richmond with my parents. She always took me for a walk through her gardens, showing me how things had grown, and sharing her gardening secrets, like how to get rid of those pesky gophers.

Thea always made us a special lunch, full of her fresh vegetables and fruits. She and my mother could entertain me for hours with stories of Kythera. And she always had some special chocolates hidden away for me, that we would usually end up sharing.

I have many fond memories of my Thea Opie, but what I will remember most about her was her strength, her beauty, and her simplicity.

She was never one to follow a crowd. She always had her own ideas, and her own fun and unique way of doing things. She was definitely sweet and charming, but God help anyone who tried to push her around.
And that is what I will always cherish, the memory of her strength and beauty, her love for nature, and of course, those chocolates. 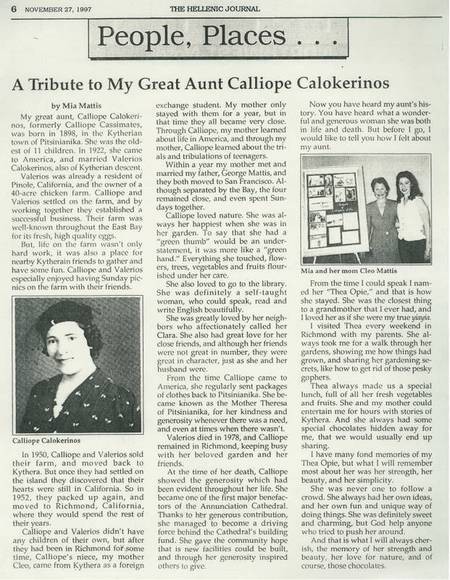