submitted by Kytherian Biographies Project on 24.09.2011 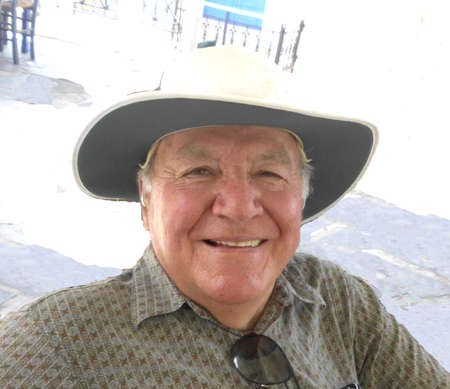 *Variations of this Obituary have appeared in:

A Medical Man Abroad Who Never Forgot Where He Came From

His secondary education commenced at Grafton High School and concluded at Newington College, Sydney. He entered Sydney University Medical School at age 16 as a recipient of a Commonwealth Government Scholarship. As a university student he appreciated the medical and surgical experience gained at the Grafton Base Hospital with doctors Mulhearn, Harris and Holland.

Dr Notaras undertook his clinical undergraduate studies at Royal Prince Alfred Hospital, where he returned after graduation in the posts of Junior and Senior Medical Officer. To gain experience abroad, he travelled to England working as a ship’s surgeon on a cargo boat.

Dr Notaras continued his studies while working at the Hamersmith Hospital. He obtained Fellowships of the Royal College of Surgeons of Edinburgh and England. He also held the posts of Senior Registrar and Medical Research Council Fellow at St Marks Hospital for Colorectal Diseases, London; and Senior Registrar in Surgery, University College Hospital, London.

Dr Notaras became a Fellow of the American College of Surgeons. He held a number of consultant posts including Senior Lecturer and Hon. Consultant Surgeon, at University College Hospital, London; and was a Consultant Surgeon to the Italian Hospital London, St Lukes Hospital for the Clergy, and Barnet and Edgeware General Hospitals. He was a recognized teacher in surgery at the University of London, and visited and lectured in 28 countries.

Dr Notaras established a company, Abgene (later taken over by Apogent Corporation, USA). Abgene became a leader in Europe, specialising in the manufacture of molecular biological reagents, special plastic consumables and instrumentation for life sciences. It also became involved in research, both inhouse and through collaborations with universities and industrial partners, particularly in gene and DNA technology.

Dr Notaras never forgot his Australian citizenship and was grateful to the Australian people for his university education. As a form of appreciation, he funded a million dollar scholarship in perpetuity in colorectal surgery, the Mitchell J Notaras Fellowship in Colorectal Surgery.pdf. The Fellowship was inaugurated at a ceremony held at Sydney University in 2004. The Fellowship is both a generous gift to further expertise in this medical area within Australia, and a benefit to the community at large. It provides an opportunity for aspiring young Australian surgeons to spend three years involved in colorectal clinical work at Royal Prince Alfred Hospital, colorectal research, and a period of one year abroad at a centre of excellence. See, the Colorectal Surgical Society of Australia and New Zealand, Triennial Report. TriennialReport09.pdf

When he retired Dr Notaras restored his grandfather’s house on the island of Kythera, Greece. He also became involved with the Kytherian community, including the purchase of equipment needed by the local hospital. He was a key member of the Kytherian Hospital Appeal Committee

Dr Notaras regularly travelled to Australia including Grafton where he, along with his brothers Angelo and John, and cousin Spiro, restored the heritage listed Saraton theatre as he “wanted the Clarence Valley to have the best”. The theatre was originally built by his father and uncle in 1926. School children line up for the opening of the Saraton Theatre in 1926. See the comprehensive magazine liftout about the opening of the Saraton, 2011. Saraton_24p_Liftout_s.pdf

Dr Notaras was a prodigious reader throughout his life, and in his retirement, and a man of great knowledge. He was much loved by all those whose lives he touched. His vitality, kindness, lively intelligence and friendships with so many, will be missed.

He died in the town of Frilingianika, on the island of Kythera, Greece, on the 30th July, 2011.

He was much loved by all of those whose lives he touched. His vitality, kindness, lively intelligence and friendships with so many, will be missed.

Dr Lorna Martin McPhail, his first wife, predeceased him. Dr Notaras is survived by his three daughters from his first marriage, Fiona, Nicola and Lorna. Also by his second wife, Bente Fasmer Notaras, and their two sons Anthony and James, his six grand children, and his siblings, Angelo, Irene, John and Betty.