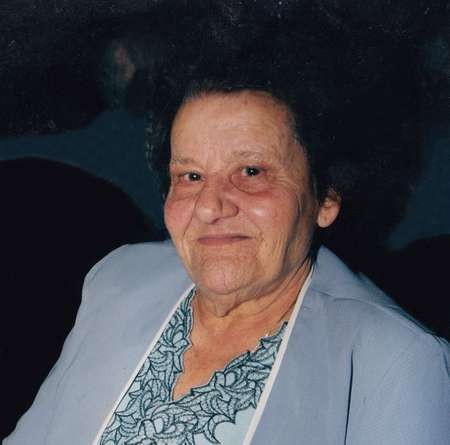 View / Download a .pdf version of this Obituary, here:

Evangelia Poulos (nee Coroneos) was born on 23 April 1928 on the Greek island of Kythera, the third child of a poor peasant family of seven. Her parents Triantafilos and Georgia lived traditionally off the land raising the family; Theodosios, Stamatoula, Evangalia, Elene, Nikos, Manoli and Stavroula. Kythera is the last of the seven Ioanian islands located under the Peloponnese and is famous for being the birthplace of Aphrodite, the Greek goddess of love & beauty. It is an island steeped in history and charm. It has seen ancient settlements and temples to the gods, is mentioned in Homer’s Iliad, traders regularly passed and sought its produce including the molluscs found off its waters which yielded purple dye used by ancient royalty. Christianity came to its shores in the fourth century and the island now prides itself on having 30 churches, 300 chapels, 30 cemetery churches, and 4 monasteries! Put together with the fact that Kythera over the ages has been raided by pirates, became a Venetian possession, was seized by the Turkish, French, Russians and British and was occupied by both the Italians and the Germans during World War II, Angela grew up in the shadows of history.

Her life on the island was hard and with her family, they worked various plots of land to make ends meet. Her father, was a long-standing the mayor of Karava, a picturesque village known for its local springs and views, as its farmlands are terraced. Evangelia’s education only lasted until 5th class, having to work the fields with her brothers and sisters. One time she fell from a donkey and with her foot stuck in the stirrups, was dragged for some distance before being freed. During the war, when Evangelia was 15 years old, tragedy struck when her mother died in childbirth. The war years were devastating for Greece. The occupying forces took all the produce for their war effort and left the locals to starve. Many people died from lack of food and it always amazed Evangelia when she first came to Australia and worked in a café how the customers left food on their plates! By the end of the war, with the island devastated, many Kytherians left for lands of opportunity.

Kythera has been called “Kangaroo” island as so many of its sons and daughters ended up coming in the years of mass immigration to Australia. Evangelia flew to Australia in 1949 due to her Aunty, who provided money for her airfare. The airfare was a whopping £300 and the journey took several days stopping at various airports along the way. Evangelia described how the passengers would have to sit around and hold a bar when they took off and landed; no seatbelts then!

In her youth, many young men could see that Evangelia was touched by Aphrodite; she had a warm smile, long wavy locks of brown hair and beautiful brown eyes. She came to marry Con Poulos when she was 23 years old in 1951. He also came from Karava – her hometown and as a merchant seaman, had got off the boat in Adelaide in 1949 to look up his brothers who were already in country NSW. Many Greeks set up small businesses in country areas and the newlyweds settled in Gilgandra, in central western New South Wales, and raised a family. Con ran a mixed business known for his fresh fruit and vegetables, his range of milkshakes and fresh fruit juices. Evangelia had five children; George, Olympia, Peter, Phillip and Eric. Sadly, her darling daughter, Olympia, died of pneumonia when only six months old. She had taken her to the doctor on several occasions and one can only speculate that the language barrier may have been a factor in not preventing her daughter’s death. She had once said about losing her daughter: “The way I felt was that she belonged to God and God had taken her back. They say that babies are like angels and she was an angel called back by God. So many tears I cried for both my beautiful daughter and for my mother.”

Across the road from where she lived in Gilgandra, the town built on farming from wheat and sheep, with its weather of extremes, Evangelia befriended a woman called Lorna who also experienced tragedy. Lorna’s father had been burnt to death in a bushfire. She had helped pull his charred remains out of the dam. They remained friends for life and always stayed in touch even when eventually both left Gilgandra to live elsewhere.

Family meant everything to Evangelia. She loved all her children and her daughters-in-law; Lorraine, Lyn and Elizabeth and loved to see them, especially when the grandchildren came along. Evangelia has 7 grandchildren; Angelique, Dean, Gabriella, Nicholas, Anna, Isabella and Sebastian, and particularly loved to spoil them with gifts as they were growing up. Evangelia also loved to cook and to garden. She had quite a green thumb growing a wide range of flowers including roses, gladiolas, dahlias, zinnias, pansies and anything that was colourful. Often people would call in and ask for flowers from her garden. Her hosting skills were legendary, as when people arrived unexpectedly, she could go to the fridge and whip up a three course meal in no time. She loved going to church and the closest Greek Orthodox Church to Gilgandra was in Dubbo and was called "The Lady of Myrtles" (Panagia Myrtidiotissa) – named after a monastery on Kythera. Evangelia kept many icons in the Orthodox tradition as they are reminders of her underlying faith. Evangelia was Godmother to two lovely girls, her niece Georgia and Sophie from Dubbo. At Christmas and Easter she would often host her brothers' and sisters’ families, cooking many delightful dishes. As it worked out, over the years, her three sisters and her three brothers all came to Australia, so she had plenty of family around her. In 1972, with the children growing up, Evangelia and Con came to Sydney after Con sold the business. There would be more opportunities for the children in “the big smoke”. She lived in Greystanes all her years in Sydney enjoying the area and making lots of friends, especially at the local shops and clubs, until she went into care.

Evangelia also loved to travel. When her eldest son George was 20 he had gone to New Zealand and worked in various places but was not at a fixed address. Evangelia came home with a 21st birthday cake and an air ticket, and announced to the rest of the family that she was going over to celebrate his impending birthday. Arriving in Auckland, she managed to get onto the front page of the Auckland Star and they were reunited in time to celebrate George’s birthday. Evangelia on several occasions went back to Greece to visit, doing a cruise and visiting several of the islands, including Tinos, an island loved due to its very special Cathedral. On another trip she accompanied her niece to China and came back with many presents for the family.

Her sense of humour and social nature were infectious and often she would have people breaking into fits of laughter with her stories. Evangelia spent the last several years of her life at Ashburn House in Gladesville where the staff lovingly cared for her. She died peacefully on 19 October 2013.


As told by her son Eric Poulos