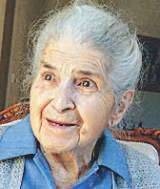 A sea of about 400 black-clad mourners packed into the Greek Orthodox Church of St Nicholas yesterday in a show of respect for Greek matriarch Helen Notaras, who died aged 96 on Monday.

They stood before a dark wood coffin that was bedecked with white flowers, listening to the words of Bishop Seraphim, of Sydney, who assists the Greek Archbishop of Australia, Archbishop Stylianos.

Bishop Seraphim lauded Mrs Notaras's life and her work, calling her an "institution" of sorts. The community would be much poorer without her, he said.
Scores of lighted candles in sand cast a soft yellow light as community groups presented floral tributes and mourners filed past Mrs Notaras's family to offer their condolences.

She was the wife of the late Harry Notaras and arrived in Canberra in 1933.

Her husband is understood to have been this city's first Greek resident and he was also the proprietor of the Highgate Cafe.

For a number of years Mrs Notaras was the president of the Ladies' Auxiliary at the Greek Orthodox Church of St Nicholas, an organisation that raised money to help the needy in a discreet way.

The Real Estate Institute of the ACT recognised her with an inaugural Property Industry Award in 1993, the high point of a long, successful career as a small business owner in Australia.

Canberra's Hellenic Club cultural adviser Michael Kazan said Mrs Notaras would be remembered with great love and respect by all who knew her.

"Not only did she become a model Australian citizen, she did not lose any of her Greek heritage.

"And really she tried to help everybody in the Greek community, especially new migrants.

"Rather than talk about the Greek culture, she lived the Greek culture," he said.
"To quote the bishop, our community will be much poorer now to lose such a rich person ... we are talking about rich in behaviour. She was a lady.

"She helped promote everything that is good, including the customs and traditions of her country."

Mr Kazan said a distinctive feature of Mrs Notaras's character was her love of learning.

"She would grasp anything, she would latch on. She had a great love for reading and learning and passing her knowledge to her children, her grandchildren and her friends."