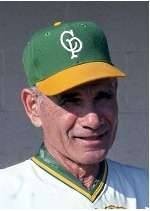 John Scolinos, a professor emeritus at Cal Poly Pomona who coached baseball at the university for 30 years and for whom the baseball field is named, died early Saturday. He was 91.  Scolinos, a resident of Claremont for 45 years, coached baseball at Cal Poly from 1961 until his retirement in 1991. Prior to that, he coached football and baseball at Pepperdine University in Los Angeles. When he retired, after 44 years of coaching, he was the winningest baseball coach in NCAA history, with 1,198 victories.  It's impossible to measure the number of lives he affected in a positive way, according to those who knew him.  "He was at the top of his class," said Fred Claire, a former Dodgers executive. "He was a coach, but his message went far beyond baseball. You couldn't be around John without feeling better about yourself."  Scolinos' Cal Poly teams were known as the classic overachievers. The program operated without scholarships at a small university, but Scolinos still managed to win 822 games in 30 seasons, and three NCAA Division II national titles.  "Coach Scolinos was truly one of the most inspirational educators and coaches in the history of Cal Poly Pomona," university President J. Michael Ortiz said in a written statement. "Our heartfelt thoughts and prayers go out to his wife, Helen, their daughter, Violet, and the entire Scolinos family."  Ben Hines, a former baseball coach at the University of La Verne, called Scolinos the Godfather of baseball in the East Valley. "It's the passing of an era," said Hines. "He really was the guy who put East Valley baseball on the map. And a nicer, kinder person you will never meet."  Hines said learning from Scolinos meant learning the "game the right way."  "He was a highly principled individual," he said. "He was always telling me `I don't want any donkeys in my program.' But, the thing was, if you behaved yourself he would never, ever cut you off the roster."  Scolinos, a graduate of Manual Arts High School in Los Angeles, played five years of minor league baseball from 1937 to 1941.  He never got close to making the majors.  "I thought I was going to be star," Scolinos said in a 1994 interview. "It was a very humbling experience. I think I learned then to stay modest, and be realistic about your goals. Know your limitations, as they say. And get an education."  Scolinos served in the U.S. Army Air Force during World War II as a navigator/radio operator, and flew nearly 20 bombing missions over Japan. He returned to Los Angeles in 1946 and enrolled at Pepperdine.  He earned his bachelor's degree from Pepperdine in 1949 and his master's degree from USC in 1953.  Scolinos' coaching career began in 1946 when Pepperdine officials found themselves without a baseball coach on the eve of the season and managed to convince Scolinos to take over the team.  "I was probably the worst coach you ever saw there at first," Scolinos said. "But once I learned I needed to treat my players as human beings, that good old Golden Rule, it started to turn around.  "From then on, I loved every minute of coaching and teaching. It's great if you can make a guy into a better ballplayer, but the most important thing is to make him into a better person."  Art Mazmanian, a former Mt. San Antonio College coach, said Scolinos was an amazing teacher.  "If you couldn't learn something about baseball and life from John, you were just not trying," Mazmanian said.  Mazmanian met Scolinos at USC. He recalled rooming with Scolinos while the two were coaches on the 1984 U.S. Olympic team.  "I know one of the greatest experiences of my life... I realized then that baseball was just one part of his life. He really was all about people. I cannot imagine anyone not liking John," he said.  Scolinos came to Cal Poly Pomona in 1961. He served one year as assistant coach under Barney Anoosian before taking over the program in 1962.  During his 30 years at the university, his teams won six conference titles. Over 100 of his players eventually went on to play pro baseball.  Scolinos was inducted into the American Association of Collegiate Baseball Coaches' Hall of Fame in 1974. He was selected as Cal Poly Pomona Professor of the Year in 1976. The baseball field was named in his honor in 1987.  "Coach Scolinos left a legacy that probably will never be matched," said current Cal Poly baseball coach Mike Ashman. "I was proud to have known him and to have played for him.  "The lessons he taught have had an impact on all his players' lives. Not only did he have the respect and love of his players, but the impact he had on other coaches across the country and to the students here on campus was equally great."  Scolinos is survived by his wife of 59 years, Helen, and daughter, Violet. Funeral services are pending.