Mitchell Notaras. A eulogy by his twin brother, Angelo Notaras 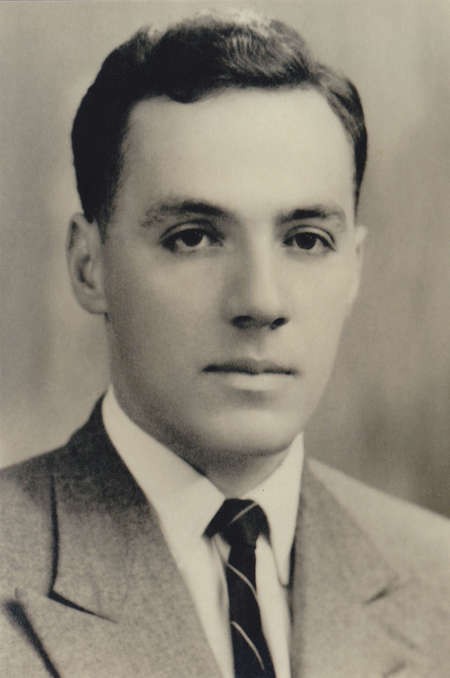 Photograph: Mitchell Notaras, at the time of his graduation from university with a dfegree in Medicine.

We are here today to celebrate the life of our dear brother and family man, Mitchell, who passed away in Frelingianka Kythera on the 30th July this year.

Mitchell was a very modest person and only recently were we to become fully aware of his many outstanding achievements, some of which were spoke about in the liturgy this morning by Father Gerasimos, as well as noted in the memorial service presentation you have.

We are pleased that Fiona and Lorna, Mitchell’s daughters, have travelled from London for today’s service.

They did ask me about Mitchell’s early life growing up in Grafton so I would like to speak about this period of his life.

Mitch and I were born on the 26th March 1933 and he being a gentleman said “after you sir” and I became the first born of the twins in a family of loving and caring parents.

We lived on the banks of the mighty Clarence River, a very dangerous place to be if you could not swim. Dad soon taught us to swim at a very early age.

Mitchell at the age of 9 or 10 became the youngest swimmer to cross the river on his own, a good 600 metres against river currents, waves and wind.

At the age of eight we went into business together looking for bottles and bags to sell to the scrap merchants for the war effort.

Dad noted our business activities and gave us a job Saturday mornings working in the Marble Bar Café standing on a mintie tin to collect the cash from customers to put into the till, as well as serve customers.

Dad also taught us about customer relations. He always said “you must have happy customers otherwise you do not have a business”. What wonderful advice to learn at such an early age.

The early years were full of fun, activity and enjoyment, we made canoes out of sheets of iron (which most times sank a few hundred metres off shore). We fished, swam, surfed, jumped off huge trees along the banks into the river, even played Tarzan in one large tree full of monkey vines.

Dad built us a boat shed and a boat and the fun continued exploring the Clarence River.

We used to put up a sail and go for miles in one direction only, have to row back as the boat was square rigged and could not sail against the wind.

We made many lifelong friends in Grafton, a number of you are here today, even travelling down from interstate. Thank you for being here.

In those days everyone walked or rode a bike to school, which on many occasions after school, having many deviations of visiting friends or simply just riding around.

When we had a lot of rain, the river rose and large pieces of buoyant water, Hycienth would float down the river.

We used to swim out and hop on and float down, hop off, walk back to our starting point and do it again.

One day, when we were doing this activity, both Mitchell and I broke the world 50 metre freestyle swim record. It happened like this. It rained, the river rose and we swam out to a large floating island of Hycienth.

We hopped on and floated down a 100 metres and realized there was another occupant besides us in the form of a huge black bellied water snake watching and slithering towards us. That’s when we broke, unofficially, the world 50 metre freestyle swim record. It was also the last time we did hop on and hop off activities.

During the war years there were no toys, a few cars, few if any holidays, no TV and you had to find your own way to school from a very early age, and yet we had fun and enjoyment denied to young people today.

Life started to get serious for us when we entered high school and we had to settle down to a more disciplined life of schooling.

Prior to entering high school Dad, to keep us out of mischief, sent us to learn to type during the Christmas holidays. In those days all documents were labouriously retyped, there were no photocopiers.

Mitchell was a very good typist and in first year at high school started his own newspaper at a penny a copy. He secured advertising, wrote up the storyline, type up copy on a waxed sheet and printed the paper on the school Gestetner printing machine. Mitchell also represented the school in various football teams.

When we reached intermediate certificate, Mitchell’s scholastic ability started to show coming top of the class many times as well as third in the state in mathematics.

Mitchell’s maths teacher was so proud of him as he was his best ever pupil. When he entered the class to announce the results his chest went out and I thought all the buttons on his shirt would pop off.

Dad sent us to Newington College Sydney as borders for the final 2 years to round off our education. Newington those days was not the Newington of today. It was a tough school with left over world one temporary classrooms, etc.

Mitch and I slept on balcony one, a big honour those days, fully exposed to the weather, hot in summer, cold in winter.

Mitch was in the top class at Newington, but hardly ever studied. I remember during study week prior to the Leaving Certificate he spent most of the time down at the pool or playing sport.

Mitch had a good exam result and gained a “Commonwealth Scholarship” to do medicine.

He was certainly influenced to take up medicine by the three doctor brothers (and later a fourth) of the Kalokerinos family, especially Archie Kalokerinos. Four brothers, all doctors, from a Kytherian immigrant family, quite remarkable.

It was at this point of our life that we separated from being always together and doing everything together. For 16 years we were inseparable.

The separation happened with good feelings between us as we were both excited about the new careers that awaited us in adulthood.

In the ensuing years we always kept in contact. During the sixties and seventies I travelled annually to Europe on business and always took the opportunity to visit Mitchell in London.

We always were pleased to meet and discuss our respective careers. We both took a great interest in what each one of us were doing and encouraged each other to do better.

There was never any sibling rivalry between us and we always expressed views to help each other and the family.

Mitchell passed away very suddenly and peacefully in the very room he was conceived in 78 years earlier as Dad and Mum had the start of their honeymoon in the ancestral home that Mitch and Benta restored.

Several years ago Mitchell joined my brother John and cousin Spiro to purchase the heritage listed Saraton Theatre Grafton from the family. Built in 1926 by our father and Uncle Jack when they were only 31 years of age, and we restored it to its former glory.

Mitchell was very proud of the result, with the addition of two cinemas the project was awarded by the National Trust as best restoration of a historic building.

Mitchell was a good brother, a good father, a good son, a good friend to all of us. We will all miss him. We will miss his emails, his phone calls and his emailed jokes. Most of you may remember his last joke about the ten commandments, it was a good one.

Mitchell’s daughters Fiona and Lorna, who have travelled from London to be here today, would like to say a few words.