submitted by Kytherian Biographies Project on 16.04.2011 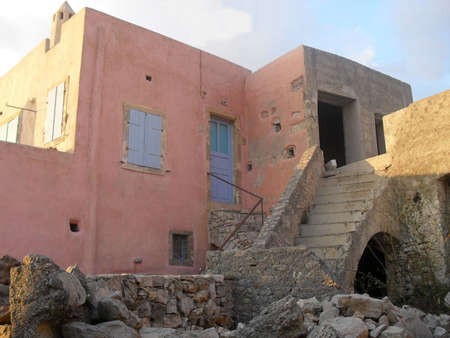 Simoni Zafiropoulou was born in Athens, and continues to live in Athens. She is the widow of Massachusetts Institute of Technology (MIT) Professor, Edwin Kuh. (More about Edwin Kuh, at the end of this brief biography of Simoni).

From 2004 she has maintained the position of Honorary Fellow in the Diplomatic Office of the Presidency of the Greek Republic, responsible for cultural affairs. (She is the Cultural Advisor to the President of Greece.)

She maintains a summer residence on Kythera, in the town of Kalokerines (Kalokairines). Those of you who know Kalokerines well, will know where her house is. As you pass the Windmill, and the main platteia which houses the church of Agios Spyridonas, if you head towards Myrtithia, the first standing house on the left, which is rose-coloured, is Simoni’s.

Fluent in French and English. Working knowledge of Italian and Spanish

March 2004 - present: Honorary Fellow in Diplomatic Office of the Presidency of the Greek Republic, responsible for cultural affairs.

1999 - 2004: Associate Deputy Minister of Foreign Affairs and Diplomatic Adviser to both the Office of the Presidency of the Republic, responsible for cultural affairs.

1995: Adviser to the Ministry of Development in Industrial Archaeology.

1983: Assistant to the Council for Equality of Two Friends. In this capacity, establishing the first Women's Agricultural Association in Petra Lesvos.
President of NGO "Development Horizons" oriented to improve the living standards of women and children in Third World countries.

Published Books she has written or edited:

2003: FOLLOWING THE FOOTSTEPS OF THE GREAT - 2300 YEARS LATER. Miletus in Greek and English. Photo journey in the footsteps of Macedon army. (Praised by the Academy of Athens) in September 2009: Reissue the daily News.

Simoni’s husband Edwin Kuh, died on Monday 9th June, 1986. He was involved in Democratic Party politics in the United States of America. He was an adviser to Robert F. Kennedy during Kennedy's 1968 campaign for the Democratic presidential nomination and to the party's 1972 nominee, former Sen. George McGovern of South Dakota.

Later, Kuh also served on U.S. President's Materials Policy Commission and the Economic Advisory Panel of the U.S. Postal Service and was adviser to the governments of Greece, China and Costa Rica.

John Kenneth Galbraith, economics professor emeritus at Harvard, said Kuh also should be remembered for an early contribution to the idea of affirmative action. "Some 15 or more years ago, he was one of a group of economists who urged that the civil rights movement be affirmed by a 10-year program by which large corporations and the federal, state and local governments would bring minorities and women into higher-level employment in the same proportions that they existed in the working force," Galbraith said.

It was in the field of Economics, and in particular the pioneer in field of econometrics that he established a world wide reputation. He headed Massachusetts Institute of Technology (MIT) Center for Computational Research in Economics and Management Science from its inception in 1978, and was credited with discovering econometrics, a theory holding that productivity varies at stages in the business cycle. He noted that productivity improves sharply during the cycle's recovery phase, peaks before the economy peaks and declines before the economy slides into recession. The systems Kuh developed are widely used in Europe by major banks and research organizations.

Little wonder that the seminal book he edited with David A. Belsley in 1985, Model Reliability, is still available through MIT Press. The book details how to assess the specification, strengths, weaknesses, limits, and sensitive features of a particular economic model.

Edwin Kuh was a man of considerable social, cultural, political, and intellectual stature.