The British Schools on Kythera 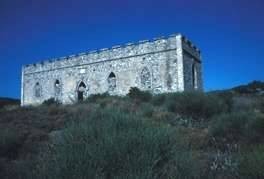 The British or Lancastrian School at Milapidea, Livadi. Photography by J. Bennet 2002.

In 1797, Napoleon's conquest of the Venetian Republic ushered in a turbulent period in the island's history, resulting by the end of the first decade of the 19th century in the establishment of a British Occupation (1808-1813) and then Protectorate (1813-1863) of the Ionian Islands of which Kythera was part. In 1820, during the early years of the Protectorate, Lord Guildford, the High Commissioner, submitted a report in which he outlined a public educational system for the Ionian Islands. In his report, he recommended that the monitorial system widely practiced in England at this time be adopted at the elementary level. This system, also known as the Lancastrian system after its founder Joseph Lancaster, was distinguished by its use of fellow pupils as 'monitors' or subordinate teachers.


The main objects of the monitorial system were to encourage students to:
acquire habits of industry and order
be taught reading, writing and arithmetic
direct their minds to the 'Blessed Gospel'
Pupils were taught the 'common rudiments of learning' before they applied themselves to the employments by which they were to earn their livelihoods.
Kythera, as part of the Ionian State, was governed by a British Resident. It was due, in part, to the zeal of one particular Resident, Captain John McPhail, that a number of Lancastrian-style schools were established on the island. These were by no means the only schools on the island, as different systems (both public and private) co-existed, but the British system was given prominence. Two British schools were in the main town of Chora (one for boys and one for girls) and several others were located in other major districts of the island. In order to reinforce this particular system, purpose-built structures were erected. Money was raised on the island to pay for their construction and corvée labour from the local population was used to build them.

The first was a boy's school in Chora in 1825, positioned on the outskirts of town. The foundations of the current Secondary School in Chora are all that remains of this. The same year also saw the construction of schools at the monastery of Agios Theodoros and Milapidea, Livadi (according to plaques over their doorways). In the following year (1826), the school at Mylopotamos was built. These three schools are still standing, in different states of preservation. Several others were constructed across the island in the next few years: one at Potamos and another at Fratsia.

Is there a common element in the architecture of the purpose-built schools? Was there a 'hidden agenda' with these structures in terms of what the British were trying to achieve? Why are they situated in particular areas of the landscape? How does this relate to distribution of the population at the time? How have the buildings been viewed by the local population since? These are some of our research questions as we attempt to understand the material infrastructure left by the British and the way it was used and viewed both then and now.