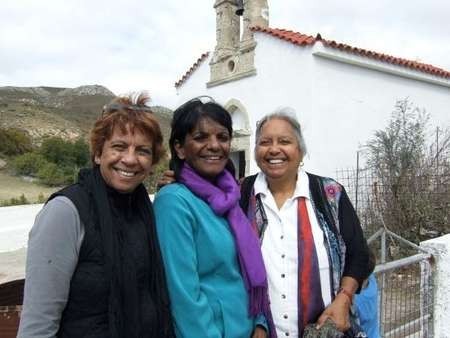 A memorial marking a historic battle involving Australian and New Zealand forces in Crete in May 1941 will be unveiled next week at the official Battle of Crete commemorations by Australia's Ambassador to Greece.

Ambassador Jenny Bloomfield and Ms Glenda Humes - the eldest daughter of Aboriginal Battle of Crete veteran Reg Saunders - will present the specially-commissioned plaque to the Municipality of Chania on 21 May in the village of Tsikalaria, close to the 1941 battle site.

The 80kg '42nd Street' plaque - made of solid bronze and measuring one metre square - depicts a vital action by Australian and New Zealand forces in the last days of the Battle of Crete.

The action at 42nd Street on 27 May 1941 was one of the last major actions during the battle for Crete which pushed the Germans into retreat - buying precious time for Allied troops to be evacuated. The site has never previously been marked.

42nd Street was the name given by Allied soldiers to the country lane running south east of Chania towards Tsikalaria. Today it is known as Tsikalarion.

Download a brilliant brochure explaining circumstances of the battle of 42nd Street battle, and its context of the battles in Greece and Crete during WWII, here:

The presentation - as part of the official 73rd Battle of Crete anniversary commemorations - brings full circle three years of research, planning and fundraising.

The plaque has been largely paid for by donations from the Greek community in Australia. Etihad Airways and Aegean Airlines sponsored the air freight of the plaque from Melbourne to Chania.

The plaque's organisers are The Friends of 42nd Street Trust - a not-for-profit organisation established three years ago by the daughters of Captain Reg Saunders MBE (1920-1990). Glenda Humes is the president of the Trust. Other members of the organisation's committee include sisters Dorothy and Judith, and Pancretan Association of Melbourne vice-president John Rerakis.

Ms Humes, who will be in Crete for the plaque's presentation, told Neos Kosmos that the event was the culmination of efforts and much generosity from the Greek Australian community, and the project's many supporters in Australia, New Zealand and Greece.

"We're very excited to be able to bring this plaque as a gift to the people of Crete, to mark a location which is a vital part of Australia, Greece and New Zealand's entwined history," she said.

"The Cretan people looked after my father after the Battle of Crete - along with hundreds of other Australian and New Zealand soldiers - and we are forever grateful to the Cretan people who sacrificed so much during WWII."

Meanwhile Ambassador Jenny Bloomfield told Neos Kosmos that she was delighted to be able to attend the plaque's presentation at this year's Battle of Crete commemorations.

"I congratulate The Friends of 42nd Street Trust for this initiative, which has been strongly supported by the Australian Embassy in Athens. Of all the events in the shared history between Australia and Greece, the Battle of Crete is the most significant," said the ambassador.

"Australians have never forgotten the resilience, the self-sacrifice, but also the mateship and compassion of the people of Crete. The events of those dark days forged a strong bond between our two nations and are part of the personal stories of many Australians - such as the Saunders/Humes family, and many others.

"As we mark the 73rd anniversary of the Battle, we would like to pay tribute to all those who gave their lives, and to express our heartfelt thanks to the people of Crete. Australians will never forget you."

The 42nd Street event is one of the last major events Ambassador Bloomfield will attend in Greece, with her three year posting coming to an end in six weeks.

The plaque - which Neos Kosmos understands will be officially received by the Mayor of Chania Mr Manolis Skoulakis - comprises English, Greek and Maori texts and sculpted illustrations to tell the story of the 42nd Street battle and its consequences. The bronze has been produced by Melbourne plaque-maker Dr Ross Bastiaan AM.

Joining Glenda Humes and Ambassador Bloomfield for the presentation will be many Anzac veterans' families, including descendants of the Maori troops who took part in the battle. The NZ 28 (Maori) Battalion - with the Australian 2/7 Battalion - were the first units to repulse the German advance to the west of 42nd Street on the morning of 27 May 41.

Their actions - a brutal bayonet charge against newly arrived German reinforcements - were spurred on by one Maori soldier performing a haka, the ancient war dance of the Maori people, as the fighting began.

The charge resulted in the death of some 200 enemy soldiers, with the Anzacs losing around 35 men killed. A number of the Australian and New Zealand soldiers who took part in the charge became the fighting rearguard of the Allied troops in western Crete - protecting those heading to the evacuation point at Sfakia.

The Municipality of Chania is finalising arrangements with the organisers over the location of the memorial site to be inaugurated later this year.


Speech given by Glenda Humes, President of the Friends of 42nd Street Trust, at the presentation event of the 42nd Street plaque, Tsikalaria, Crete, 21 May 2014

Ngatanwah, my family are part of the Gunditjmara peoples of western Victoria in Australia,… it’s very good to be here with you today - and with my sisters Judith and Dorothy, and our children....

Firstly, let me thank the Municipality of Chania, for hosting this event today. Mayor Mr Manolis Skoulakis, and your staﬀ, a very big thank you.

I would like to thank Ambassador Jenny Bloomfield and the Australian Embassy in Athens for your tremendous assistance. I also thank New Zealand’s Honorary Consul Mr Costa Cotsilinis for being with us.

Before I go on, I acknowledge the presence the Maori elders here today and their families.

Ladies and gentlemen we bring you all greetings and best wishes from the people of Australia, and from my Gunditjmara people.

We visited Crete ﬁrst in 2010 and it was an opportunity to see first hand a site where my father had served, saw combat, and was sheltered and cared for by the Cretan people, especially the people of Lambini south of Rethymno, and one family in particular - the family of Vasiliki Zakarakis.

In 2010 we had the opportunity to visit Lambini and meet her children to thank them.

On that trip, we came here. When we visited the 42nd Street battle site we could feel dad’s presence and the spirits of all those who had fallen there.

My brother-in-law Rod who is here today found a shell casing in the olive groves - which was later examined by military experts in Australia.

They said that from its location, it had almost certainly had been ﬁred by a Lee Enfield rifle carried by an Australian or New Zealand soldier on 27 May 1941.

It was a sign. We decided then that we would commit to marking the 42nd Street battle site for future generations, and that a memorial -dedicated to all those who fought and fell here - should be erected.

We wanted to bring recognition to the Anzac soldiers who were here, and to mark their sacriﬁce and memory for future generations.

The journey of the 42nd Street plaque continues. We look forward to establishing - with the Municipality - an appropriate site for the completed memorial that befits this beautiful plaque.

This is our gift to the brave people of Crete from the people of Australia and New Zealand.

The plaque that we are about to present has been funded by private donations largely from the Greek and Cretan communities in Australia, and on behalf of The Friends of 42nd Street Trust, I wish to express our deep gratitude to the following organisations:

And special thanks to major donors -the Andriotakis family of Sydney.

We gratefully acknowledge the support of Etihad Airways and Aegean Airlines for sponsoring the journey of the 42nd Street plaque from Australia to Crete.

We have been assisted by so many people on this journey - in Australia, Greece and New Zealand - and we thank you all.