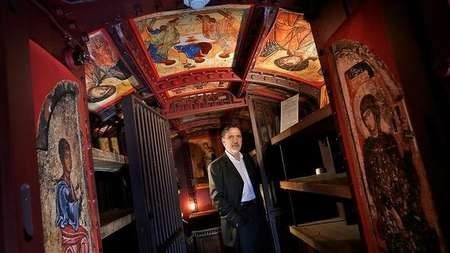 FROM EXHIBITIONS OF PRICELESS ANTIQUITIES, TO SEAFOOD FEASTS AND THE VIBRANT CAFE SCENE OF OAKLEIGH, THERE HAS NEVER BEEN A BETTER TIME TO DIP INTO THE CULTURAL LIFE OF EVER-EVOLVING GREEK MELBOURNE, WRITES VICTORIA KYRIAKOPOULOS.

Most Saturday afternoons, lawyer Bill Papastergiadis drives from his Toorak home to meet friends in the bustling Greek cafes in Oakleigh's Eaton Mall. "I think it's an exciting time to be Greek in this city, and to be proud to be a Greek-Australian," he says, sipping on his frappe.

Papastergiadis loves the mall's lively cafe culture, but as the new guard president of the Greek Community of Melbourne, his sights are firmly on the big end of town.

In the historic Greek precinct of Lonsdale Street, a $15 million, 15-storey beacon of Hellenism has risen on the site of the original three-level headquarters of Melbourne's oldest and biggest Greek community organisation.

Parthenon friezes around the first-level balcony and an iconic image of the discus thrower cleverly incorporated into the facade celebrate the community's proud heritage. But as home to a new Greek Centre for Contemporary Culture, it will play a key role in forging its contemporary identity.

It's an ambitious investment in a precinct that has dwindled as Greek community life dispersed into the suburbs. But Papastergiadis says it is important to maintain a central, visible presence. The building is a symbol of a mature, diverse and successful migrant community that has become part of the city's cultural fabric. "During the Lonsdale Street Festival we get 100,000 people through here over two days. The prime minister last year said it was the biggest street festival in Australia, and half the attendees are not Greek," says Papastergiadis.

As well as overseeing the annual Lonsdale Street Festival and the Greek Film Festival, the Greek Centre's broad activities include weekly Greek history and culture seminars, the annual Greek writers' festival and a language centre for beginners' Greek and ancient Greek. A visual arts space will have a strong contemporary arts focus, and there are spaces for small events, meetings and conferences, as well as a rooftop bar.

"The centre will become a hub of activity for all that we do, with a calendar of interesting events all year round," says Penny Kyprianou, manager of the community's arts and culture program for the past three years.

Collaborations with other festivals include next month's concert by Greek-Cypriot singer Mihalis Hatzigiannis with the Melbourne Symphony Orchestra for the Melbourne International Festival.

"We are all looking to expand our audience, and these collaborations are a really fantastic way to do that," says Kyprianou.

While his brother has been able to get secure government funding and private donations for the Greek Centre, Nikos Papastergiadis , a professor at Melbourne University's school of culture and communication, has been shaping its cultural vision as co-chairman of the centre's advisory committee.

"We see the cultural centre as a place where Greek language and culture in its classical and folkloric sense can be preserved and showcased, but also where people of Greek background can have a platform to experiment with new ideas and put on events that not just address our background but help define what we are becoming," Papastergiadis says.

On the other side of the city, a team of Greek and local curators is carefully installing an exhibition of ancient treasures from Athens' Benaki Museum in the heritage-listed Old Mint, now home to the Hellenic Museum. Gods, Myths & Mortals: Greek Treasures Across The Millennia, secured for an unprecedented 10-year loan, spans 8000 years of Greek civilisation.

"For a collection of this magnitude and importance to travel outside Greece for 10 years is extraordinary, and we are incredibly privileged to have it here in Melbourne," says museum chief executive John Tatoulis.

"As well as the main collection, each year there will be a mini-blockbuster that is theme-specific, from Byzantine art or ancient Greek jewellery to weapons of the ancient Spartans."

Established by the wealthy Stamoulis family in 2008, the museum has ramped up its cultural program. In November, it is teaming up with Open House Melbourne for a race around the city discovering neoclassical buildings inspired by Greek architecture (first prize: a trip to Open House Athens).

There are also plans for a local modern retrial of Socrates, similar to an event held by the Athens-based Onassis Cultural Centre two years ago, with leading EU and international lawyers and judges and a jury from the public.

In summer, open-air screenings of classic and contemporary Greek films will be held again in the museum's lovely courtyard, one of Melbourne's best-kept secrets.

"There's a dynamic and a confidence and a momentum in the Greek community now that's very exciting," Tatoulis says.

That same confidence has spawned new-generation Greek eateries such as Jimmy Grants, where hipsters queue for souvlakia called Mr Papadopoulos (souvlaki is now Melbourne vernacular; in the rest of Australia it's a kebab or gyros).

As the poster-boy for Greek food, chef George Calombaris has helped raise the profile of Greek cuisine. During the Flavours of Greece festival, running over the next few weeks, some of Melbourne's established and new Greek restaurants will showcase the diversity of contemporary Greek cuisine. Melbourne maintains its place as the third-largest Greek-speaking city outside Greece. While some traditional inner-city migrant strongholds such as Brunswick, Northcote, Richmond and Prahran retain a strong Greek presence, these days Melbourne's Greek heart beats loudest in Oakleigh.

"Now we take as granted that Oakleigh has become the new Hellenic centre of Melbourne," says Kostas Nikolopoulos, deputy editor of Melbourne's Greek newspaper, Neos Kosmos. "Greeks are coming here from all over Melbourne. They come here, they shop, they enjoy their coffee."

Two kilometres from the monolith of Chadstone, 15 kilometres from the city, tucked off the main Warrigal and Dandenong arterial roads, Oakleigh was a railway township and its grid of narrow streets gives it a village atmosphere. A $2.7 million redevelopment of Eaton Mall in 2013 built on the area's Mediterranean flavour and emerging cafe scene, creating an al fresco dining precinct emulating the lively village squares of a European piazza (or in this case, plateia). Oakleigh has long been a shopping and meeting place for Greeks. Its delis, cake shops, butchers and christening stores attract a wide catchment living in the south-east and beyond.

In the past six years, an injection of new cafes, patisseries, restaurants and modern souvlaki outlets opening late in the evenings has made it a thriving social hub, attracting younger crowds and families from further afield, and not just Greeks.

Unlike their inner-city counterparts, the Greeks who settled in Oakleigh in the '50s and '60s did not necessarily outgrow their homes, and property prices made it relatively affordable for their children to stay in area or surrounding suburbs.

"In the mornings, most of the oldies take their grandkids to school, buy the newspaper and come here, and the shops resemble what we call the Greek senate. They start arguing and discussing the issues, local and international," says Nikolopoulos, an Oakleigh local since 1978.

With no family in Melbourne, journalist Helen Kapalos regularly heads to Oakleigh from her inner-city apartment for a Greek fix.

"It feels like a plateia in a regional town," she says. "It taps into that part of my heritage that I equate with nurturing and love, the warm bowl of avgolemono, the friendly Greek faces and conviviality and that sense of togetherness."

"It's unique in Australia, and there's something very special about that vibrant Greek heart of Oakleigh around Eaton Mall," O'Meara says.

Eaton Mall's evening shift began six years ago with the arrival of Vanilla Cakes and Lounge, a family-run 450-seater cafe, patisserie and restaurant that stayed open until 1am.

"After 6pm the mall was a ghost town," recalls Vanilla matriarch Helen Spanos. "We offered something that was missing, a family-oriented place for young people to come and hang out. You can come at any time and have a meal or a coffee and cake, and there's not many places in the suburbs you can do that."

Vanilla is now standing-room-only when the house band plays on Thursday nights.

It's all part of the evolution of Greek Melbourne.

Now in its 21st year, the Greek Film Festival screens the latest Greek cinema as well as films by Greek-Australian filmmakers. This year's program includes the premiere of A Family Affair, a documentary on the Xylouris musical dynasty, filmed in Greece and Melbourne. Shira's Journey, Carol Gordon's documentary and book project on the Greek Jews, will be accompanied by a photographic exhibition by Emmanuel Santos.