Photos > Diaspora Social Life > At the Launch of Robyn Florance's A Touch of Greece in Junction Street.

At the Launch of Robyn Florance's A Touch of Greece in Junction Street. 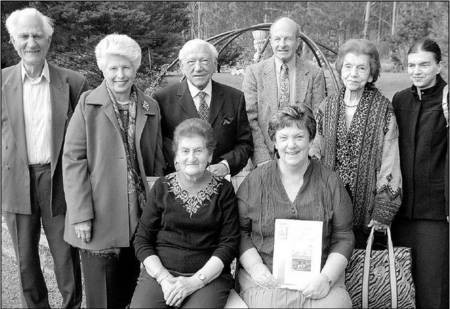 Descendants of the original Greek families to conduct businesses in Nowra came from as far afield as Queensland for Saturday’s launch of Shoalhaven Historical Society’s new book, A Touch of Greece in Junction Street.

They included President of the Kytherian Association, Victor Kepreotis of Bardwell Valley who performed the launch at the Kladis Estate Winery, Wandandian.

Among the 100-strong crowd were also members of the Aroney, Castrisos, Mosckos, Vlandys and Mavromattes families, most of whom came from the island of Kythera to settle in the Nowra district.

Shoalhaven City Council’s arts development manager Allan Baptist was master of ceremonies for the function in the beautiful garden setting at the winery.

Officially welcoming the guests, Mayor Greg Watson provided personal memories of eating in the cafes covered by Robyn Florance’s book. He cited the work ethic and sense of family as reasons for their success.

Member for Kiama, Matt Brown spoke of the warm feeling of the Greek cafes, and the “wholesome hamburgers” among the food they sold. On behalf of the NSW Government, he congratulated Mrs Florance on the work, which had been recognised by the Community Relations Commission that provided funding for the project under its Community Development Grants Program.

Mr Kepreotis thanked Robyn and the historical society for researching and publishing this story that was so important to the families. He said many of these pioneers had arrived with little, yet at a young age had established their own businesses which prospered. Some had migrated alone, to be followed years later by their wives, and by hard work they were able to send money back home while also accumulating capital.

They were prepared to open for long hours their premises that were often located alongside theatres and billiard rooms. After officially launching the 44-page book, Mr Kepreotis presented a history of Kythera to Mrs Florance.

Society president Lynne Allen thanked Jim and Nikki Kladis for hosting the day, and continuing the tradition of Greek hospitality, they had left no stone unturned to ensure its success. Mrs Allen said she was in awe of those Greek people who had left their homeland at a young age, without any knowledge of the language, to build successful lives in Australia. She and Mrs Florance both thanked all those who had assisted in the research, freely providing information and photographs for the publication.