Brochure of the 42nd Street battle in Crete, during WWII 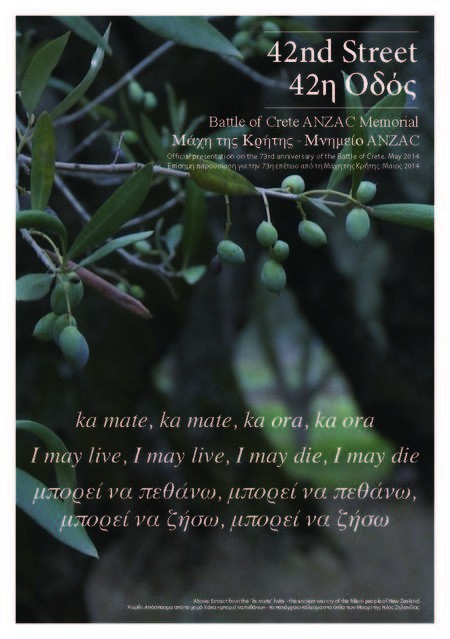 In WWII the name '42nd Street' was given to what was then a country
lane south-east of Chania, Crete, by a British unit who set up camp there in 1940 - the 42nd Field Company Royal Engineers. The popular 1936 Hollywood musical '42nd Street' that was familiar to the troops confirmed its nickname as preparations were made to defend Crete in 1941.

After the German airborne invasion of the island on 20 May 1941
and the loss of Maleme airfield two days later, despite outstanding gallantry and initial success at Maleme and Galatas (and at Rethymno and Heraklion in the east), the Allied forces in western Crete - mostly Australian and New Zealand (Anzac) soldiers - were involved in a desperate fighting retreat.

On the night of 26 May, Anzac units deployed south of Chania had
pulled back to defensive positions along 42nd Street. Hundreds of soldiers - the remnants of seven battalions - two Australian (the 2/8 and 2/7) and five New Zealand (21, 28 Maori, and elements of the NZ 19, 22 and 23 battalions) - were dug in on the eastern side of the road, facing west.

Before daylight on 27 May, a meeting took place between the Allied commanders present. They agreed that if the enemy appeared, their troops would engage them. That morning, the Germans in the form of the 1st Battalion of the 141st Gebirgsjäger Regiment - an elite division of Austrian mountain troops that had landed at Maleme just days before - began advancing towards 42nd Street.

"Australian infantrymen of the 2/7 Battalion leapt from their positions and with a raucous yell charged."

One of those infantrymen was Private Reg Saunders: "When we go there they were real men, excited like us and some of them terribly frightened. They were highly-trained Germans but they got such a shock." The New Zealand official history goes on to describe the effect of the charge: "The forward elements of the enemy did not wait. They threw away their packs and ran. They were shot from the hip and those who hid in the scrub were bayoneted."

The Anzac thrust continued for almost 1500 metres, pausing briefly
at a 'wadi' (dry river bed) some 600-800 metres west of 42nd Street. Estimates suggest that over 200 German troops were killed in the action, with around 35 Australian and New Zealand soldiers killed or mortally wounded. When the charge came to an end, the Anzacs tramped back through the olive groves, carrying their wounded and dead past the bodies of the fallen enemy, to their original positions. "The [German] ground troops gave no more trouble that day," concluded the NZ history.

In the hours that followed, Chania fell to the Germans. Meanwhile
parties of enemy troops began circling the 42nd Street positions to the south. That night under cover of darkness, the last Anzacs at 42nd Street began to retreat east.

The charge had done much to enable Allied forces in the west to break
contact with the German advance and begin the withdrawal to the south coast. For the next four days and nights, many of those who had fought at 42nd Street took part in a series of rearguard actions with British commandos to protect other units heading to the evacuation point at Sfakia.

Private Hemi Hemara Aupouri of C Company 28
(Maori) Battalion who led the Haka at 42nd Street. Aupouri survived the action, but was wounded at the second battle of El Alamein in Egypt and died of his wounds on 3 September 1942.

Today, 42nd Street is known as Tsikalarion. It branches south from
Leoforos Soudas - the E75 road - which connects Chania to the town of Souda. The positions of the Anzacs stretched from the intersection of

Map of the action on 27 May 1941 from the official Australian military history.

As Anzac scouts marked their progress, the order was given by the
Allied commanders to fix bayonets. At 11a.m. the enemy appeared in the defenders' sights. As the forces engaged, records have been unable to confirm whether it was the Australians or New Zealanders who charged first, but one action forever symbolises the events that unfolded as the Anzacs engaged the enemy.

As the fighting began, on his own initiative, a Maori soldier - Private
Hemara Aupouri, rose from his position. With one hand clutching a bren gun magazine - as a Maori warrior of old would have done with a stone patu (club) - he began to perform a Haka , the ancient call-to- arms of the Indigenous people of New Zealand.

Joined by his fellow Kiwis, the haka rang out through the olive groves,
and the New Zealanders and Australians charged as one. Between the 2/7 Battalion and the Maoris, was the NZ 21 Battalion; its historian takes up the story: "The forward companies of 21 Battalion had scarcely lined the sunken road when they heard yells that could only come from Maori throats. It was a blood-stirring Haka.

"The Australians produced a scream even more spine chilling than the
Maori effort and the sight of the Maori battalion charging with vocal accompaniment sent the whole line surging forward.

"The appearance of a line of yelling Maoris sent [the enemy] to ground
and they opened heavy defensive fire... A few stray Greek soldiers added their Hellenic yells to the blood-curdling din.

Tsikalarion and Leoforos Soudas in the north, to approximately where
today the VOAK highway crosses Tsikalarion to the south.
Most of the olive groves on the western side of the road are long gone, but a few small fields of ancient trees that were present during the battle survive.

As you walk along Tsikalarion and through what remains of those olive
groves, pause to reflect on the events that took place there on 27 May 1941 - take a moment to honour the memory of the Anzacs at 42nd Street, and to all who fought and fell there.