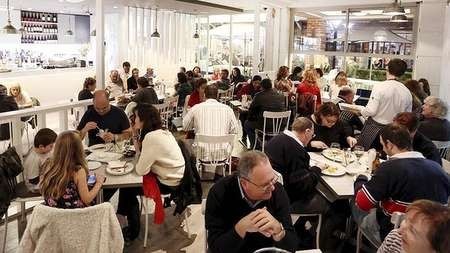 A Greek favourite is the clincher on a classic menu.

Ah, doughnuts, is there any cuisine you haven't infiltrated?

The Greek version, loukoumades, is a weekend-only option at Enigma in Castle Hill. The small, deep-fried balls of dough are served in a sweet honey syrup, topped with sesame seeds and cinnamon. Golden and crispy on the outside and soft inside, they're delicious. It's a generous serve - and pretty hard to stop at just one - so I'd suggest sharing these treats at the end of the meal lest you demolish the whole bowl.

Located in the bustling, restaurant-filled Piazza at Castle Hill Towers, Enigma attracts a diverse crowd on a busy Saturday night. The place is packed, with family groups sitting alongside couples of all ages and tables of friends.

The white decor gives it a fresh, modern feel. There are nautical touches, too, with ropes and metal oars used as decoration. If the name is familiar, it's because co-owner Mark Psaroudis previously ran Enigma at Brighton-le-Sands, now closed.

The menu of the new venture, which opened last August, features many classic Greek dishes, and the cultural influence translates to the drinks list too. There's ouzo, of course, plus Greek wines and a beer. The mezze plate is a popular entree option, with many tables choosing to share it, scooping up delightfully garlicky tzatziki and flavoursome taramosalata with warm, slightly crispy, wood-fired pita bread. There's also a wedge of feta and thick pieces of fried haloumi, plus kalamata olives, freshly made dolmades and fried chorizo slices that ooze meaty oil on the plate (perfect for swiping with that bread). The olives and feta are imported from Greece, as are the sardines. These are a little on the salty side but easily fixed by wrapping the fish in some pita and adding tzatziki.

The spanikopita comes in four triangles, not as a pie. The spinach, feta and black pepper filling is tasty but the ratio of filling to pastry isn't quite right. We're left wanting more filling and less pastry.

Much more successful is the slow-cooked lamb, a house specialty. A wood-fired oven sits between the kitchen and the bar, its metal doors providing a homely, old-style touch to the room. The meat is cooked in here for three hours and when it hits the table, flakes apart with a press of a fork. Another bowl of that lovely tzatziki helps spruce up the vegetables - carrots, cauliflower, zucchini and roasted potato.

There are a few hits and misses on the food front. The Greek salad, for instance, is freshness on a plate but the dressing is barely discernible. And while the attentive and welcoming staff keep things moving all night, they lack knowledge about some of the dishes they bring to the table (though they do follow up with the chef), which is surprising given the prices. The pop classic soundtrack - for example, Boyz II Men - is also a little incongruous with the surrounds.

But this popular restaurant has a smart-looking fit-out, buzzing atmosphere and crowd-pleasing dishes. If you're a doughnut fan, visit on a Friday or Saturday night.

ENIGMA AT THE PIAZZA