submitted by Kytherian Newsletter Sydney on 28.02.2005 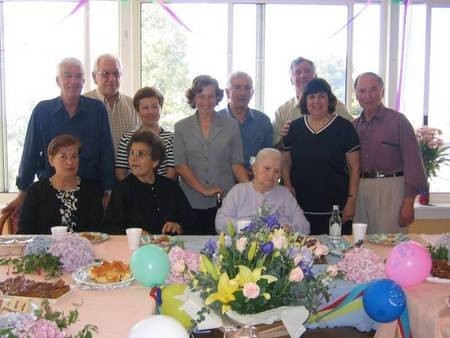 "Elene was a self-sufficient person who lived alone after the death of her husband George in 1985. However, the years gradually took their toll, and in 2001, she suffered a fall and has since then been living in Bodington Nursing Home in Wentworth Falls. On December 30th 2004, about 50 of her family and friends gathered at Bodington to celebrate her 100th birthday. Typically, she was lucid about the past and recalled with gratitude the help that she received from her Australian neighbours when she first arrived. She stated her pride in being an Australian and was particularly proud of the congratulatory messages that she received from the Queen, the Governor General, the Prime Minister and her local Member of Parliament.

Despite her advancing years, her 2 children, 6 grandchildren, and 9 great grandchildren continue to be the focus of her existence, and she was very pleased to receive a photograph of all of her descendents for her birthday.

Elene has been on inspiration to those who have known her, and has exemplified the ideals of determination, responsibility and love for family that is so characteristic of Kytherian women".


From The Kytherian, Newsletter of the Kytherian Association of Australia, February, 2005, page 5.

To subscribe to the Kytherian Newsletter you only need to join the
Kytherian Association of Australia
P. O. Box A203
Sydney South, NSW 1235
Australia.