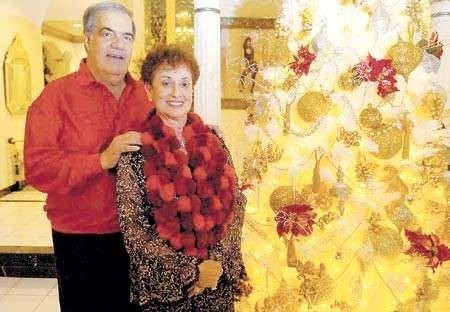 Frank and Athena Sarris opened their home last week for a Christmas party for the women of the Philoptochos -- Friends of the Poor -- at All Saints Greek Orthodox Church, in Canonsburg, USA.

No matter what country you are in, kourabiethes, melomakarona, thiples and baklava are sweet signals of a traditional Greek Christmas.

On the buffet table, you're likely to find bite-sized dolmadakia (stuffed grape leaves); spanakopita (savory phyllo pies); and avgolemono (lemon-egg) soup. These appetizers often are served at holiday parties and especially at dinner at sundown on Christmas Eve.

Christmas is the second most important religious holiday of the year in the Orthodox church, following Easter. The women of the Philoptochos -- Friends of the Poor -- at All Saints Greek Orthodox Church, in Canonsburg, got an early start celebrating the birth of the Christ child with their annual Christmas party last week at the home of Frank and Athena Sarris, owners of Sarris Candies, of Canonsburg.

It was a very merry event. A huge bowl of salad greens offered with a mountain of olives and feta cheese was just the first item in a buffet line that stretched across an entire wall of the lower level of the Sarris' cheerfully decorated home.


"This is our one social event of the year," says Philoptochos president Rosemary Nikas. "We're purely philanthropic the rest of the time. We do a monthly food outreach of 50 dinners to the community and contribute to the Canonsburg Library, the Hospital Emergency Room Fund and the Safe Haven Family Center, among others."

But that night, it was time to dress up in finery and -- maybe -- break the traditional fast just once before Christmas. The 40-day fast, which began Nov. 15, excludes meat, olive oil, fish with backbone, any animal products and alcohol, says Harriet Matthews, who owns and operates Rosie's Gleeka, a one-woman Greek bakery in Canonsburg. Orthodox Greeks also fast during other religious seasons and every Wednesday and Friday, she says.

Some Greek Orthodox choose a modified fast, during the first week of the holy season and the week before Christmas, as well as Wednesdays and Fridays.

Matthews made the dolmadakia, Greek hamburgers (bite-size meat patties floured and fried until crisp), mini cabbage rolls and other hors d'oeuvres for the gathering. She has a lot of work ahead of her, too, filling orders for Greek Christmas cookies, including kourabiethes (butter cookies similar to Mexican wedding cookies); melomakarona (an oval cookie dipped in honey); and thiples (rolled thin flaky pastry dough that is deep-fried, drizzled with syrup or honey and sprinkled with toasted sesame seeds or nuts).

Some families also serve finikia, a batter cookie stuffed with nuts; after being baked, the cookies are dipped in sugar syrup and rolled in fine nuts.

Baklava -- the most famous Greek pastry, featuring phyllo leaves, a nut filling and sugar syrup -- is a must for the holiday. Some Greek bakers opt for the labor-intensive trigona, bite-sized individually-wrapped baklava cookies, or they use kataife, shredded phyllo dough, to roll the nut filling in jellyroll-style.

Christmas in Greece begins when the first star appears on Christmas Eve, Dec. 24.

"In our church, the next 'day' starts at sundown the previous day, similar to the Jewish calendar," says Marilyn Rouvelas, author of "A Guide to Greek Traditions and Customs in America" (Attica Press, 1993). "There's no fasting on Christmas Eve."

The traditional table often features stuffed turkey, lamb or roast pork; roasted potatoes; spinach-and-cheese pies; and fruit, says Rouvelas, who converted to Greek Orthodoxism when she married a Greek-American in 1967. The Washington, D.C., resident gathered oral histories from church women and worked with church leaders to compile her book, which covers the church's traditions from birth to death, holidays, customs and tips on visiting Greece.

Matthews' traditional Christmas dinner is a beef tenderloin roast with a stuffing made of rice, pine nuts, raisins and herbs and spices. The stuffing recipe is a family heirloom. "You have to practice over and over to get it right," she says, adding that she learned to cook and bake from her mother, Rose, 91, after whom the 20-year-old bakery is named.

Regardless of the entree and side dishes, the centerpiece of the Greek Orthodox Christmas table is christopsomo, a round sweet bread similar to the church's famous Easter bread (tsoureki). However, while the Easter bread is studded with red-dyed eggs, the christopsomo (nuts and fruits can be added) often is engraved and decorated in some way that reflects a family's profession. Or, the home baker makes an imprint of her hand on the top of the bread before baking and tells her children that Jesus visited and blessed the loaf while it baked.

The bread is redolent with two Middle Eastern spices, machlepi and masticha, Rouvelas says. Machlepi is a ground seed from Syria. Masticha comes from the sap of the mastichodendro bush grown primarily on the Greek island of Chios and used in the production of gum. The two spices also are traditional in Greek Easter bread.

Rouvelas says that the head of the household customarily cuts the bread to start the Christmas meal, making the sign of the cross on the bread with a knife while saying, "In the name of the Father, the Son, and the Holy Spirit." Slices are distributed to diners with a wish of "Kala Christouyena" ("Good Christmas) or "Chronia polla" ("Many years").

Greek Christmas doesn't end as the last crumb is gathered following the day's feast. Christmas signals the start of what is called the Dodecameron, which continues until Jan. 6.

"There is New Year's and the cutting of the Vasilopita (bread or cake for St. Basil), in which a lucky coin has been baked," Rouvelas says. St. Basil's feast day is Jan. 1, a church holiday, and parties are held in his honor, she adds.

Food customs at New Year's include eating something sweet at breakfast to sweeten the coming year and to set an abundant table of food to ensure plenty.

The season closes with Epiphany, which ranks third in importance in the Greek Orthodox Church. Practicing Orthodox fast for several days before the observance. Special services are held to proclaim God's first public revelation of the identity of Jesus, his baptism and the beginning of his ministry, as well as the sanctification of holy water.