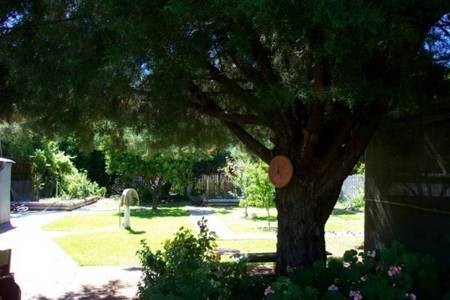 ...still (2005) visible in the backyard of the their then Gilgandra home, 7 Morris Street, Gilgandra.

A member of the Jehovah's Witnesses now lives in the house, and he kindly allowed me into the backyard to take photographs.

The configuration of the backyard is very different to the one that prevailed from the 1950-1975 when the Psaltis family lived there.

A very large almond tree which dominated the front centre of the backyard, is no longer there. Nor is George and Alexandra's vegetable garden, with its various demarcated areas.

However I do remember a number of olive trees - some towards the rear fence - 2 of which are still there.

These are depicted in this photograph.

My guess is that these two olive trees were planted by George (Proto)Psaltis when he first moved into 7 Morris Street.

They are, like those of Jack Pentes gigantic by Kythera, Greek, and European standards.

5 families - the Pentes, Sklavos, Kelly (Koumokellie), Psaltis (Protopsaltis), and Poulos (Tzortzopoulos) - lived in close proximity to each other - culturally, residentially, and commercially.

Olive trees. Living Memorials to Yarni Logothetis, and other Kytherians in Gilgandra

Similarly, these two gigantic olive trees, which are are more clearly visble at -

-are living memorials to George and Alexandra (Proto)Psaltis and family.