submitted by Kytherian Newsletter Sydney on 14.04.2006 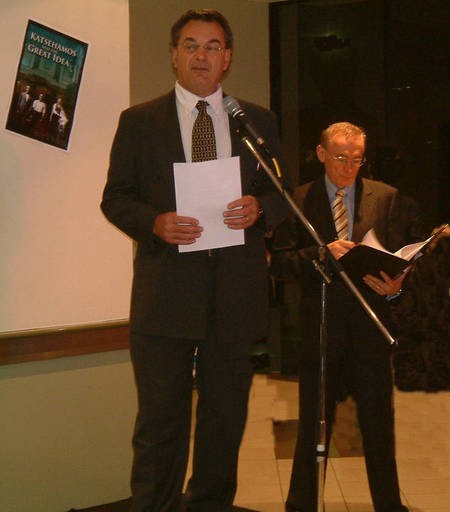 At the Sydney launch of Peter Prineas' book, Katsehamos and the Great Idea.

The launch occurred at 7.00 pm on Wednesday April 12, 2006, at 'Alexander's on the Park', ground floor American Express building, 175 Liverpool Street (opposite Hyde Park).

The venue was packed with 170 guests, with varying interests, including, cinema historians, those interested in Heritage issues, both for the natural and built environments, Councillors from Gwydir Shire Council, Arts NSW representatives, the former Minister for the Arts, and Premier of NSW, Bob Carr, and Greeks, Philhellenes, and of course, Kytherians.

Review(s) of the book

Kytherians flocked to Bingara from everywhere

George Poulos, introducing the Honourable Bob Carr at the launch of Katsehamos and the Great Idea

Katsehamos and the Great Idea is also available in the New England and Northwest region of NSW, from the Roxy Theatre, Maitland Street, Bingara.
Phone: 02 67240003
or email here