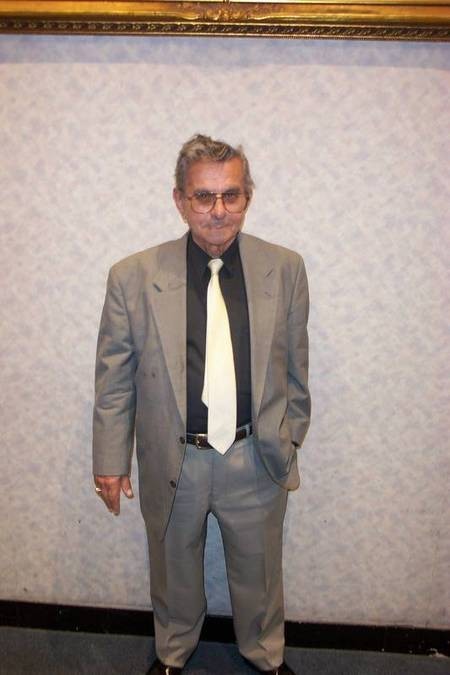 At the 2005 Aroney Awards, held at the Twin Restaurant, 560 Botany Road, Alexandria, on Saturday 5th March.

Jim is the author of

A book by Dimitris Protopsaltis ( Blaveri), known in Australia as Jim Saltis
Available through the Kytherian Association or the author JIM SALTIS
Phone 93999767 or email saltisjim@optusnet.com.au
PRICE: $20.00

The book is about growing up in the dynamic Greek community of Alexandria, Egypt during the Depression and right through the affluence that the WW2 brought to the city. It is narrative about the second Hellenistic époque in the History of this glorious city.
Although it appears to be autobiographical it is in reality a mosaic of people that the author encountered during his growing up in Egypt. Their own and the author’s “ yom assal yom basal” as the Egyptians say, days of honey and days of onion. It is written in the distinctive Greek Alexandrine dialect, daringly sincere to the point of embarrassment,
The following independent anonymous critique describes the mood of this compacted literary attempt.


Australia became his second country but Alexandria took roots to his heart and his memories of the twenty-three years that he lived there, are deeply etched in his memory and his heart and signposted his subsequent journey.
Dimitris Protopsaltis, a Greek from Egypt, remembers and reminisces the good and bad moments when he lived in a country so much different from Greece, a country filled with mystery and wisdom, where a mixture of civilisations is trying to coexist, struggling for a better tomorrow.
In a period of upheaval and a period of critical historic developments, a Greek from Egypt is confronted with the common destiny of all the foreigners in Egypt, the expulsion and uprooting.
In his troubled childhood when the affluence and the poverty alternate following the historical developments, the romanticism, the eros, the friendship, refuses to submit to the harsh reality. They remain lively sentiments creating the heroes (real people) that are approachable and ordinary with human dimensions.
The conditions that the author lived are familiar to the Greeks from Egypt. But the manner that he is presenting them is simple yet at the same time gently he renders
them a possession for everyone.
The reader together with the author lives as an adolescent, an adult and attains manhood in Alexandria of yesterday that never returns.