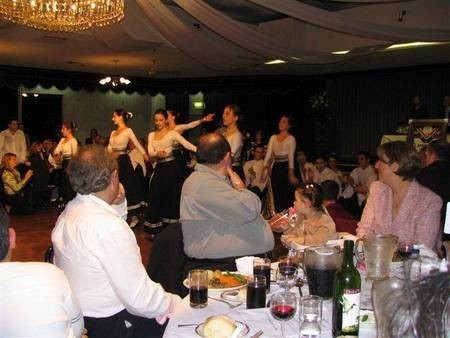 Members of the senior dance group of the Kytherian Association of Australia, dancing at the September Dance, Sydney, 2004.

Given the central role that Music, Dancing and Kefi play in the Greek psyche - and in particular the Greek Island psyche, one would have expected that by October 2004, 1000's of entries depicting diaspora Greeks, participating in all three activities would have been posted to kythera-family.

In fact, by the end of October, 2004, only a single photograph of dancing, and that on the island of Kythera, had been posted by Rowen Parkes.

And only one mention of the notion of kefi had been made. Speaking about the wedding reception of Andy and Evangelia Aroney in 1939, Professor Manuel Aroney recalls - "A reception with more than three hundred guests was held in the hall above Peter Zaglas’ cafe in Victoria Street; it was an evening of celebration with great “kefi” (gaiety), large quantities of food and drink and hours of Greek music and dancing."

And yet the word kefi is the most used word of all at any Greek function.

What is kefi to you? How would you define it?

In Sydney, Greek dancing classes have been sponsored by the Aroney Trust, and managed under the auspices of the Kytherian Association of Australia for more than a decade.

The dancing expertise of participants is exceptional and sophisticated.

Most observers agree that the existence of these classes have helped to integrate and perpetuate the Kytherian heritage and ethos in Australia.

I would encourage all who participated in, or know the history of the KAA Dancing Classes, and who have photographs of the dancers participating in cultural events - to post them to the web.

By way of introducing these key concepts - I include here a section by Dana Facaros, from the book, Corfu and the Ionians(Cadogan Press, a travelogue) on:

In the homogenized European Union of the 1990's, the Spaniards and the Greeks are among the very few peoples who still dance to their own music with any kind of spontaneity, and it's no coincidence that both have untranslatable words to describe the spirit or mood that separates foing through the motions, and true dancing. In Spain, the word is duende, which, with the hard-driving rhythms of flamenco, has an ecstatic quality; in Greek the word is kefi, which comes closer to soul.

For a Greek to give his all, he must have kefi; to dance without itcould be considered dishonest. The smart young men in black trousers and red sashes who dance for you at a 'Greek Night' taverna...(might not) have it; two craggy old fishermen, in a smoky kafenion in Crete whi crank up an old gramaphone and dance for their own pleasure, do. It has no age limit: teenagers at discos pounding out all the international hits of the moment are really only waiting for 1 or 2am, when the clubs switch over to Greek music, and the real dancing and kefi can start. You can feel the kefi at Easter, when an entire village joins hands to dance an elegant kalamatiano, an act as simple and natural as it is moving, an enhanced celebration of community that the rest of us are lucky to ever experience.

Greek music has been influenced by Italy (most notably on the Ionian islands), Turkey and the Middle East, and the Balkans, all of whom were once influenced by the Byzantines, who heard it from ancient Greeks, who heard it from the Phrygians, and so on. Traditional island songs, nisiotika, are played on bagpipes (tsambouna), clarinet (klarino), and various stringed instruments - the laouto (a large mandolin used for backing, traditionally picked with an eagle's quill), the lyra, a three-stringed fiddle, held upright on the knee, played on Crete and the southern Dodecanese, the viola (violin), the kitara (guitar), and the double-stringed hammer dulcimer (sandouri, once limited to Greek Anatolia, and now heard most often on the eastern islands. The best time to hear nisiotika is during a summer saint's day feast (panegyri or at a wedding.....

Contemporary composers like Mikis Theodorakis often put modern poetry to music, providing splendid renderings of the lyrics of George Seferis, Odysseas Elytis and Yannis Ritsos; sung by the deep-voiced Maria Farandouri, they are spine-tingling, even if you don't understand a word. Even current Greek pop has surprisingly poetic moments. It owes much of its origins to rembetika, the Greek equivalent of the blues, brought over and developed by the more 'sophisticated' Asia Minor Greeks in the 1920's population exchange, who in their longing and homesickness haunted the hashish dens of Athens and Piraeus. rembetika introduced the bouzouki, the long-necked metallic string instrument that dominates Greek music today, to the extent that nighclubs are called bouzoukia - rougher ones are known as skilakia - 'dog shops', where popular singers croon throbbing, lovelorn, often wildly melodramatic music with a Middle Eastern syncopation that offers Greeks some of the cartharsis that ancient tragedies gave their ancestors.

Although expensive, a night out at one of these nightclubs is an experience not to be missed. Turn up after midnight, buy a botle of wine and fruit, and emote. As the evening wears on, members of the audiencemay take over the microphone, or the singer may be covered with flowers, or even make the enthusiats forget the law about spasimo, or plate-breaking. If enough kefi, or soul is flowing, you may see middle-aged bank managers dance with wine glasses or bottles on their heads.......

Summer festivals and village weddings are the places to see traditional dancing. Every island has its owwn dances or slight variations, some preserved, some quickly forgotten. Beginning Greek dancers would do better starting with a syrto, with a slow and somewhat shuffling pace throughout, or perhaps the kalamatiano, a 12-step syrto, the national dance for many people; everyone joins in, holding hands at shoulder-level, while men and women take turns leading and improvising steps. Nearly as common is the dignified tsamiko, where the leader is especially acrobatic, the handerkerchief seems to be the only thing that keeps him from flying away altogether. Women are the centre of attention of the tsiphte teli, a free spirited, sensuous belly dance from Asia Minor for the loose-limbed, swivel-hipped and well-oiled, but just as often men...steal the show.

Other dances are normally, but not exclusively, performed by men. The zeybekiko is a serious, deliberate, highly charged solo, (or sometimes duo) dance with outstreched arms, evoking the swooping flight of the eagle; a companion will go down on one knee to encourage the dancer, hiss like a snake and clap out the rhythm. An introspective dance from the soul, the performer will always keep his eyes lowered, almost in a hypnotic state; because it's private, you must never applaud. Another intense dance, the hasapiko, or butchers' dance, is perhaps better known as the Zorba's dance in the West. The syrtaki is more exhuberant, traditionally performed by two or three men, often to a rembetika, tune; the leader signals the steps and it requires some practice but is well worth learning - as Alan Bates discovered, when he finally began to fathom kefi from Anthony Quinn, at the end of the film Zorba the Greek.