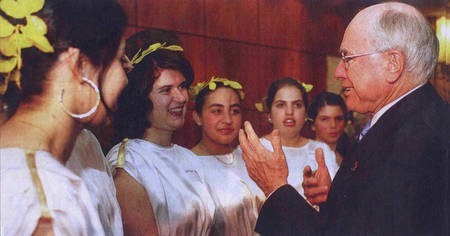 Prime Minister John Howard believes he has community support for his plan to test the language skills of migrants, despite opposition from ethnic groups.
The Government is planning to make new arrivals take a test confirming their language skills, as well as their knowledge of Australian history and values.
And they will have to wait four years, rather than three, to become citizens.
Labor and multicultural groups oppose the strict new requirements for citizenship.
But Mr Howard believes the com­munity is behind his plan, which will be unveiled in a discussion paper on Sunday. “There’s overwhelming sup­port in the Australian community for a requirement that people who become Australian citizens have a working knowledge of English,” he said.
There will be some flexibility in the new regime, catering for cases like elderly parents joining their children.
“[The proposals are] not a tablet from the mountain,” Mr Howard said. “There will be a commonsense approach taken to these things.”
Mr Howard expects the new requirements to be relatively simple for anyone serious about becoming an Australian.
‘Certainly we are going to lift the waiting period to four years, there will be a fairly firm English language requirement and the paper itself.
will contain quite a number of issues,” he said.
“It won’t become more difficult if you’re fair dinkum, and most people who come to this country are fair dinkum about becoming part of the community.”
Mr Howard pointed to the Greek community as an example of how an ethnic group could maintain links to their original culture while becoming part of mainstream Australia. “The
Greeks are just a wonderful example of how you do it,” he said after receiving an enthusiastic welcome at a Greek community event (Kytheraismos Conference) at the Hellenic Club in Woden.
“You integrate fully, you become part of the mainstream, your first loyalty is to Australia, but that doesn’t mean you don’t have a place in your heart for your home culture, and that’s how we want it.”
Labor leader Kim Beazley, who has his own plan for a values pledge by new arrivals, believes a four-year wait for citizenship is too long. And while the OppOsition believes Eng­lish skills are necessary for new migrants, it doesn’t think they should be a requirement for citizen­ship.
“It is important for migrants that they speak good English and that they have an opportunity to partici­pate effectively in the workplace [and] that’s what gives them an opportunity to do so,” Mr Beazley said. “But as a test of citizenship
no, it’s what’s in your head and in your heart that counts.”
The Federation of Ethnic Cornmunities Councils suspects the language rules would be discriminatory. Federation chairwoman Voula Messimeri said she could not see what Australia stood to gain from the plans.
"We don't support a tough language test because we feel it will discriminate against people from communities where they don't speak English," he said.
Ethnic Communities Council of NSW vice-chairman Justin Li said values could not be taught by making people study for an exam, and warned the eldefly, or migrants without literacy skills, could be discriminated against.
“We cannot expect, for example, elderly migrants from overseas, who have been sponsored by their chil­dren to live in Australia, to have the same potential for proficiency in English as younger migrants,” he said. “We also cannot expect the same standard from migrants from non-European countries or in societies without basic educational opportunities.
Pleased: Prime Minister John Howard at the Hellenic Club yesterday, commends the Greek community for setting a “wonderful example” of integration. Picture: AAP