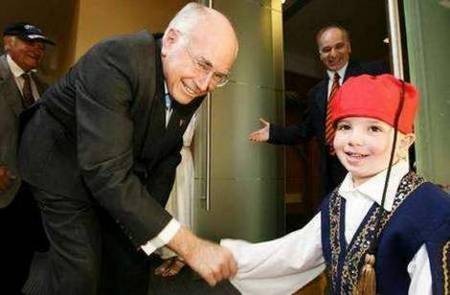 
Immigrants will need more than just a reasonable command of English if they want to become Australian citizens - a basic knowledge of cricket may also help.

The Prime Minister, John Howard, said yesterday a discussion paper on the new citizenship test, to be released tomorrow with an accompanying advertising campaign, would propose quizzing aspiring citizens' language skills as well as their grasp of Australia's history, culture and values.

Asked if the history component would include questions on cricket, Mr Howard was prepared to consider it.

"You never know. I think to understand the history of this country I think you might have to do that," he said.

Any immigrant who was "fair dinkum" about becoming a citizen would pass the test easily, he said.

The Opposition Leader, Kim Beazley, continued to press his idea yesterday of making people sign a pledge to respect Australian law, institutions and values before they entered the country.

This made more sense than waiting until they became eligible for citizenship, he said.

However, after days of criticism from the Government, Mr Beazley acknowledged it was impractical to put the pledge on visa forms for tourists because most tourists did not fill out such a form.

He proposed another "mechanism" to apply the idea to tourists. "When in Rome, do as the Romans do. I wouldn't go to Saudi Arabia on a visit and get off a plane and look for the nearest bar for a good drink-up."

The Ethnic Communities Council of NSW expressed concern yesterday that the test would be more form than substance. "We don't disagree that migrants should embrace

Australian values, but values and beliefs cannot simply be instilled into people just by making them sit though an exam," said its vice-chairman, Justin Li.

Under the proposed changes, immigrants would have to spend four years instead of two in Australia before becoming eligible for citizenship. Mr Howard said that would be plenty of time to learn English and swot up on their general knowledge.

"The whole idea of a test is that you have got to pass it in order to qualify," he said.

He acknowledged great Australians such as Victor Chang and Arvi Parvo could not speak English when they arrived but said they learnt it later. "We're not saying that nobody in future will be admitted unless they can speak fluent English at the time of admission."

Mr Howard wanted a sensible balance between the old cultural cringe and more recent zealous multiculturalism, "where people are welcome from any part of the world providing they become part of Australia".

Speaking outside a Greek community function in Canberra later yesterday, Mr Howard hailed the Greeks as a "brilliant" example of ethnic integration.

"You integrate fully, you become part of the mainstream, your first loyalty is to Australia, but that doesn't mean you don't have a place in your heart for your home culture and that's how we want it," he said.