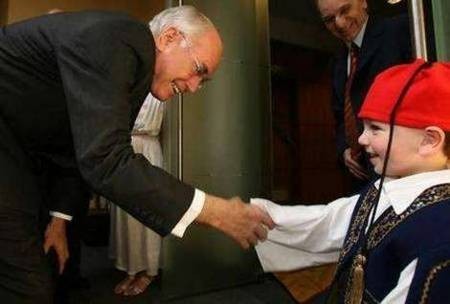 Ethnic groups have declared that the proposed four-year wait for migrants to become Australian citizens is unfair and unwelcoming, and an English test would be discriminatory.

The proposals are in a discussion paper that will be released tomorrow.

As Government and Labor jostle for ownership of the "values" debate, Mr Howard said prospective citizens would need to know "a good deal more about Australia", including history, values, customs and way of life.

But he insisted the test would not make it more difficult to become a citizen "if you're fair dinkum — and most people who come to this country are fair dinkum about becoming part of the community".

The waiting time for citizenship is being effectively doubled. The Government had already introduced legislation to increase it from two years to three, but that has not yet passed.

The chairwoman of the Federation of Ethnic Communities Councils of Australia, Voula Messimeri, said there was not a persuasive case to increase the wait.

"You would want to encourage people to embrace the Australian identity with all its rights and responsibilities as soon as possible," she said.

Ms Messimeri said linking citizenship to an English test would "create a group of people never able to become Australian citizens, including people who may be illiterate in their own language".

The Ethnic Communities Council of Victoria condemned the proposed "draconian" changes as "cruel, unfair and against the national interest".

Council chairman Phong Nguyen said extending the time for citizenship would prolong "the already difficult settlement and adjustment process" and send a message to migrants "that they are not welcome in the Australian family".

Mr Howard said: "We should all embrace the notion that when people come to this country, whatever their cultural background may be, their first requirement is to become part of the Australian mainstream."

"Zealous multiculturalism" had gone wrong because "it really encouraged people to believe that the Australian mainstream was the optional extra, and you could essentially just remain identified with your original culture," he said.

"Nobody wants people to forsake their original culture or repudiate it, despise it …There is always a place in your heart for the country in which you were born. But there has to be a greater emphasis on integration into the Australian mainstream. … I've been saying that for 10 years or more and I think most Australians agree."

Mr Howard suggested there would be flexibility in application of the English test. Asked about the difficulties faced by the elderly, he said "there will be a commonsense approach".

Opposition Leader Kim Beazley said Labor had signed up for the increase in the citizenship waiting period to three years but that four was too long.

This week, Mr Beazley said people coming to Australia should have to sign up to a statement of Australian values. He said yesterday that citizenship was "down the track. My concern is at the beginning of the process, not the end of it."

People coming into Australia on a permanent basis should come "with a defined statement of respect for Australian values".

He conceded tourists would have to meet a lesser standard of commitment but dismissed criticisms that it was impractical to apply his idea to tourists, or that Australians did not observe the values of the countries they visit.

"When in Rome, do as Romans do … I wouldn't go to Saudi Arabia on a visit and get off the plane and look for the nearest bar for a good drink-up … I wouldn't go to Thailand and look around in a Buddhist culture where people respect the top of the head … for somebody's head to pat.

"I make a study of every country I go to, what their values are, and what their norms are, in order to be a decent ambassador for this country."

Mr Beazley has written to the Australian Tourism Export Council asking it to help with establishing the best way to ensure all people visiting Australia know and understand Australian values.