submitted by Kytherian Brotherhood Of Baltimore on 23.05.2006 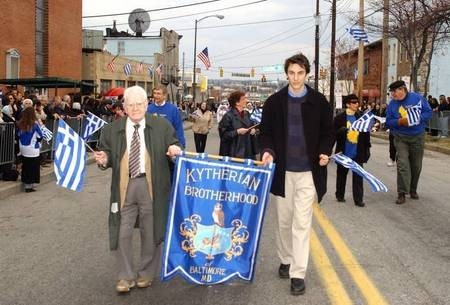 The parade was held in Baltimore's Greektown on Sunday, March 26, 2006
in Baltimore, Maryland, USA.

Information about the parade and the
activities of the parade committee can be found on the web at www.greekparade.com.


"BALTIMORE, MARYLAND- Colorful, traditional costumes and ethnic pride of both young and old will fill the streets of Baltimore on SUNDAY, March 26, 2006, 2:00 PM, as the Greek-American Community commemorates Greek Independence Day with a festive parade in Baltimore’s historic Greektown. We have groups participating from as far away as Ocean City, Hagerstown, and Frederick, Maryland, from Washington, D.C., Falls Church and Fredericksburg, Virginia and also Lancaster and York, Pennsylvania. We honor our ancestors’ sacrifices that freed, protected and preserved the ideals of Greece, the birthplace of Freedom and Democracy, which shaped the entire world. This Parade recognizes this Legacy of Greece and our Spirit in America: Freedom and Democracy for All This event is celebrated in every corner of the world and we bare the responsibilities as our Greek and Philhellenic forefathers did to further this Legacy. We welcome one and all — especially, our children, inheritors of our traditions and future guarantors of these ideals.”

In addition, the event has drawn the attention of many area leaders. Among the dignitaries who will lead off this year’s parade are U.S. Senator Paul Sarbanes, U.S. Senator Barbara Mikulski, Governor Robert Ehrlich, Lieutenant Governor Michael S. Steele, U.S. Congressman Benjamin Cardin, U.S. Congressman Dutch Ruppersberger, The Ambassador of the Republic of Cyprus and the Consul General of Greece (both from Washington, D.C.), and many more elected officials. Adding further excitement, the Naval Academy will march in force with a unit of Greek! Philhellene Midshipmen, Color Guard, and Navy Drum and Bugle Corps.

The year’s Mid-Atlantic commemoration marks the l84” year since Greece’s declaration of independence from Ottoman Turkish rule. Greeks and Philhellenes gather on this solemn, yet joyous, occasion to remember the sacrifice of their ancestors in defeating the tyranny of slavery. We now carry the torch of Democracy to be passed to future generations.

We invite others to join with us on this day of celebration, so that the flame may burn brighter, our children may live in peace, and the world may now that never again shall the voice of freedom be extinguished. In 1987, President Ronald Reagan proclaimed March 25th” a national Day of Celebration of Greek and American Democracy, acknowledging in his resolution, “ ... the lasting debt of gratitude to the People of Greece and all People of Greek heritage for the Democratic ideals which inspired the founding of our own Nation.” This day offers the United States and Greece, two nations which share the same convictions about man’s inalienable rights on this earth, an opportunity to celebrate freedom and democracy together. Prelude to the parade will be a DIGNITARY AND PRESS ONLY RECEPTION AT 12:00 NOON in the heart of Greektown at IKAROS Restaurant, located at 4805 Eastern Avenue (corner of Ponca St.). The parade will feature dance groups in ethnic costumes, children groups, the U.S. Naval Academy, the Orthodox Clergy from the Baltimore-Washington area and delicious ethnic food will be available. Parade route proceeds from Haven Street, up Eastern Avenue, turns right onto Ponca Street and ends two blocks past the Saint Nicholas Greek Orthodox Church at Fait Avenue".