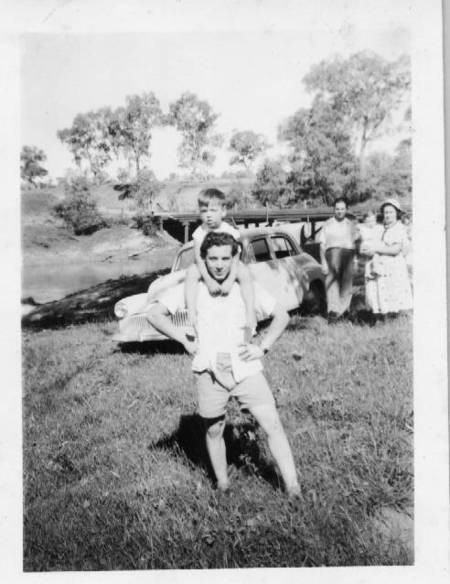 Dimitri (Jim) Castrisios Miliotis known as Jim Miller and his wife, Envangalia (Angela) (nee, Balson) after they were married, settled in Chinchilla, a small town in South-western Queensland.

They had 4 sons, the first two, non-identical twins; George and John, and later, Chris and Bill (Vassilli).

They established, the Miller General Store, which was quite large, selling fruit, smallgoods, newspapers, and operating as a cafe as well. Initially it was begun in a flood plain on the "wrong" side of the railway tracks - and eventually moved to higher ground. Jim placed a high value on honesty, and service. He insisted that the food be fresh. And he was very innovative in his store advertising. "One time he hired a plane to throw pamphlets over the town of Chinchilla. One pamphlet had a lucky number on it, and whoever found and presented that pamphlet was given a free box of fruit." Angela worked in the shop beside her husband, whilst raising the 4 boys.

Commercial competition to the store was provided by another Greek family in Chinchilla, the Melegans.

A number of Kytherian's became employee's of the Miller's - including two of my maternal uncles, Theothosios (Theo) Belo Corones, and his brother, Manolis (Manuel) Coroneos, from Karavas, Kythera. They lived in the quarters behind the shop, and interacted with the young Miller children.

The photograph above was taken at a family picnic, with future doctor and researcher, Chris Miller, perched up on my Uncle Manuel's shoulders. Jim and Angela, who is holding Bill, future solicitor, and Kennedy-Miller executive are in the background, near the familys' FJ Holden.

[For another family photograph at the same picnic, see entry for George Miller, under, People, subsection, High Achievers.]

On rare "breaks" from running businesses, particularly in small country towns, Kytherians liked to get out "in the bush", and "unwind" for a few hours.

Both my uncles spoke highly of Jim, and my Uncle Theo confirmed his "softly spoken style" - a marked contrast to the "boisterous" style of Triunduphilo - Theo's father - and my grandfather.

The Miller family maintained the store in Chinchilla for 11-12 years; at which time they sold it, and moved to Vaucluse in Sydney.