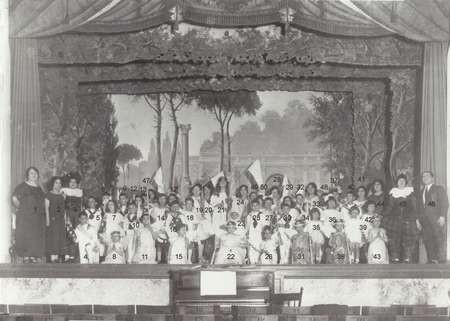 See the original photograph of this concert, without the numbering

Many of the chidren in the photograph are Kytherians, who became well established in Australian-Kytherian society in the 1940's and 1950's, and in subsequent decades.

Mrs Anna Perivolari is the "ample" woman on the far left of the stage.

My grandmother, Chrysanthi Mavromatis (nee, Aroney, wife of Emmanuel), helped organise the event. It was a source of great pride for her, all her life. She always kept this photograph in a prominent place in the house.

You can enlarge the photograph with the enlarge facility available at each entry. If you wish to see a larger version as a .pdf, which you can manipulate easier, and see more clearly - download the image here:

Despite the photograph being 88 years old (as of 2012), all but 5 of the persons have been identified.

Do you know who those 5 are?

There are also some - (6) - first names missing for persons who have been identified.

Do you know the first names for these persons?

Are you a descendant, relation, or friend of one of the 50 persons depicted in this photograph? In which case, can you shed more light on the life of those persons, and that of their descendants?