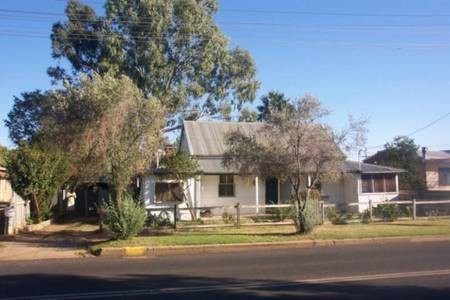 5 families - the Pentes, Sklavos, Kelly (Yiannakellis), Psaltis (Protopsaltis), and Poulos (Tzortzopoulos) - lived in close proximity to each other - culturally, residentially, and commercially.

I found of course, all the buildings, where the Kytherians had conducted their businesses; but all of these - with the exception of the Gilgandra Fruit Shop (my father's old shop), had substantially changed their usage.

I also found a series of what I came to call living memorials to the Kytherians who had lived, worked, and died in the town.

These were the olive trees that almost invariably every Kytherian family planted.

But the Kytherian presence in the house depicted in this photograph runs much longer and much deeper than this,

For more that 2 decades the Sklavos family, headed by Peter and Theothora, lived in the house. They left in 1968, moving to the Gold Coast, Queensland.

The house was then occupied, (to the best of my memory) by the Aird-Kelly (daughter of Paul and Chris Kelly, of ABC Cafe fame) family, for a few years, before being sold to the Logus family.

The olive trees then, become not only a living memorial to Yarni Logothetis, but also to the Sklavos, Aird-Kelly, and Logus families as well.

...in these olive trees, which could live for thousands of years, we have a living memorial to Yarni Logothetis, the Sklavos, Aird-Kelly, and Logus family - and their "Kytherian presence" - in the town of Gilgandra, NSW