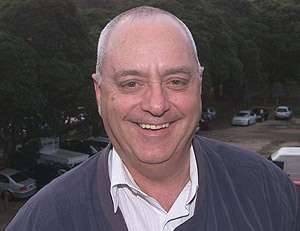 His life and death was a telling story

Today marks the first anniversary of the passing of a much-loved journalist at The Daily Telegraph, Peter Frilingos. PAUL KENT recalls the wit and wisdom of a friend and colleague who always told a good story:


NOT long after Peter Frilingos died last year Penrith coach, John Lang was on the phone and the conversation turned around to his passing.

Lang said he always liked him, liked what he stood for.


"He didn't always quote exactly what you said," Lang said.


"But he always quoted what you meant to say."


Part of the fun that has been missing around this office the past year – since Chippy passed away a year ago today – is the art of telling the story.


The fun part being the off-the-record variety.


Those were the ones that ran unrestricted by the demands of a newspaper and always told of some atrocity or another.


He found stories you never dreamt of hearing.


A club chairman three years back was walking around the football with a walking stick, telling everybody that he tripped and fell at home.


For this he gained much sympathy. Truth was, he was leaving the basketball and snuck off behind a car in the car park to relieve himself when a woman came around the corner with her two kids and bumped straight into him.


The kids started screaming, the club boss panicked and turned to run and smashed his leg on the bull-bar of the car he was hiding behind.


Imagining the look on the chairman's face was what got to Chippy the most.


Those were the best stories, the off-the-record stories.


He had a deep catalogue.


Shortly before his death Chippy was telling a story about a workmate in this office who'd had a car accident. As usual, he was building up the laughs.


He told the story and the workmate was protesting throughout, challenging the details, and his frustration was only fuelling the fire.


Chippy silenced him, telling how 20 years ago this guy wrapped himself around a telegraph pole and how he had argued with the police when they came to cut him out of the wreck, trying to talk his way out of a ticket.


When the punchline arrived and the laughs subsided the workmate finally chipped in.


"I didn't argue with the coppers because I was unconscious at the time they cut me out."


Chippy thought about it briefly.


Now, as we know, the stories have fallen silent, as we pass a year since the death of a man whose life was stories, both finding them and writing them, and in his spare time telling them.


That's the part not a lot of people saw, but they were generally the best part. The Chippy stories that couldn't be printed.


He left us regarded as the greatest rugby league journalist this town has known, passing away at his desk.


As we all know, he was on the phone to NRL boss David Gallop, chasing a story, when he suffered a heart attack that was too big even for him to handle.


He was 59 and life had been no different for the past 40 years as he chased and chased, breaking some of the biggest stories in the greatest game of all's history.


His superior talent, though, at least for one observer, was not so much the breaking of the big story as the ability to be on the pulse with that day's news.


He led the day's news more often than any man ever has. Even as he looked to do it again there was no indication that he was suffering any sort of heart problems.


He had taped an episode of The Back Page on Fox Sports and returned to work and was sitting at his desk when I turned to wind him up about something.


That's what we often did with him. Pulled the pin from the grenade and rolled it gently his way, letting him detonate.


This day he just shrugged his shoulders and said "yeah" and turned to pick up the phone.


No doubt he was feeling ill. Nobody knew how serious.


More than 30,000 of them had not reached the average Australian life expectancy age, and all of them went too soon.


Those numbers are significant because heart disease is generally considered an older person's disease, something to begin to worry about when the retirement home comes into sight.


However already around Australia 3.2 million people live with cardiovascular disease.


This represents a frightening figure of one in every six Australians. If nothing changes it will grow to be one in every four by the middle of the century.


To combat this, The Heart Foundation has launched an appeal in Chippy's honour for National Heart Week.


Coupons are being printed in The Daily Telegraph all week.


The usual band of misfits will be on radio, making the best of the hole they are left with.


Hopefully one of them will tell an atrocity story for old time's sake.


There is a stockpile waiting.